It's impossible, but it is rather sweet 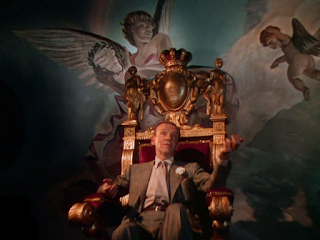 Yolanda and the Thief is simultaneously two things: it is a bold prototype for the way musicals would be made at MGM throughout the late 1940s and early 1950s; it is also dysfunctional and bad.  It was sufficiently bad (and, more importantly, sufficiently unprofitable) that it's perhaps only a lucky accident of MGM's production queue that its particular styles would get another, better chance to capture the favor of the filmgoing public.  It was even bad enough that (however briefly) it helped send Fred Astaire into retirement.  In fairness to it (it's not so bad as to demand exile), Astaire's retirement was so brief and half-hearted that it's most appropriate to treat it as the footnote it turned out to be; if you were just looking at his filmography without access to that little biographical tidbit, you'd at most think he took a small sabbatical if you noticed it at all.  The point remains, though, Yolanda sucks.  Astaire distanced himself from it, and while we've seen other movies that Astaire later revealed he wasn't too keen on, I think this time he was right.  As for its other lead, Lucille Bremer didn't have the same cushion.  It ruined her career, not entirely justifiably; she's not remotely good in it, but nobody is.  (Astaire's fine, but the closest to good is Leon Ames in an important bit role.)  Plus it's not like she wrote or directed the thing, which is where all of its problems lie.  And even Irving Becher's screenplay, from Jacques Thery and Ludwig Bemelans's story, while undercooked and underplayed, isn't itself the biggest issue.
I hate being a hot take person, but if I were asked "who is the most overrated director in American cinema history?", I would reply, without hesitation, "Vincente Minnelli."  And early Minnelli's worse.  In full honesty, I like Yolanda more than his first color musical, 1944's Meet Me In St. Louis.  Even then St. Louis is probably more successful in its aims, for St. Louis pretty much implicitly promises it's going to be boring from the outset.  Yolanda, though, on paper, and going by its insane false-identity premise, seems like it should be bursting with weird energy in pursuit of its crazed farce.  Instead, it's a crazed farce that Minnelli directs right into an early grave.  And while maybe blessed with less facility for silly comedy than, say, Charles Walters, Minnelli's not even always this bad at it: The Pirate, which came only three years later, has an extremely similar basic premise, and finds all the weird energy you could ever ask for between Gene Kelly and Judy Garland; hell, I Dood It, which came two years earlier, and is wholly unacceptable as an MGM-produced musical, nevertheless uses Red Skelton more-or-less well in, yep, another false-pretenses farce.
As for Yolanda, when it does "get fun," it's a pretty strained kind of fun, and when it finally taps into Minnelli's more universally-acknowledged strengths—which are more along the lines of a musical sequence director, and even something close to his films' full-on uncredited art director—Yolanda must represent peak Minnelli in its deployment of revoltingly gaudy color to illustrate his movie's cinematic dance.  So, yeah, it's terrible.  But it's also such small portions.  Even if you are on Minnelli's aesthetic wavelength, and think of him as the great artist of Technicolor, the dancing and music in this dance musical are shockingly infrequent and presented in terms of big, unattractive lumps.  That means if you don't like its two major sequences (really, only one major sequence, but its other, definitely-minor sequences are so cautious and tossed-off that it's hard to say they're being offered up to be liked or disliked), then, sorry, Yolanda leaves you out of luck. 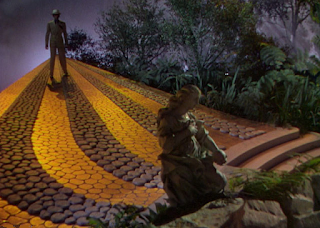 So: Yolanda runs 108 minutes, above-average but hardly an automatic red flag.  The material, however, is stretched thinly enough across those 108 minutes that it feels like it could've been 98 (or 88, or 78) and you'd barely have to adjust the plot.  Mostly, that's thanks to a film-long slackness.  Yet it starts with an entirely unnecessary scene, too, with a teacher we'll never see again (Ludwig Stössel), holding his second-grade class outside as the sun dips below the mountains.  Obviously, this is less for the benefit of his eight year old students who are missing their dinner, and more for ours, as he establishes the setting of our tale, namely a fictional Latin American country, occupying a hazy, approximate space between Bolivia and Brazil, and named "Patria" (I don't know if that's clever or just lazy).  This scene is mainly an excuse for a sunset panorama on an MGM soundstage.  The idea of it prefigures Brigadoon, except Brigadoon actually did interesting things with its artificial vistas.  This is pretty, but also pretty useless—it's not even a framing device that proposes to tell these children (and by extension, us) a story of their nation.  It's just an introduction to some random aspect of the place the movie's going to be about.  The kids start singing the Patrian national anthem, "This Is a Day For Love," and this gives you a taste of the few and not-especially-memorable songs Arthur Freed and Harry Warren wrote for this film.
As "Day For Love" continues, we move on to a convent that runs an orphanage, and this turns out to be an important day for one orphan in particular, namely Yolanda (Bremer).  Yolanda has just turned 18, and that means it's time for her to leave and come into her birthright as the heir to the fortune of the Aquavivas (forget "Patria," this is awful), the Aquavivas being the richest family in the land and effectively Patria's aristocracy, which is why it makes very little sense that Yolanda was ever stuck in an orphanage in the first place.  Still, she returns home to her aunt Amarilla (Mildred Natwick), who's been incompetently running the family manor since her parents' passing, and Yolanda is welcomed with great, albeit mismanaged, fanfare—oddly, Amarilla kind of just fades into the background after her introduction, barely a feature of the plot let alone any kind of inconvenience—but despite her aunt serving as proof positive that the Aquaviva empire does not actually require competent stewardship, Yolanda has doubts that she's up to the task she imagines for herself. 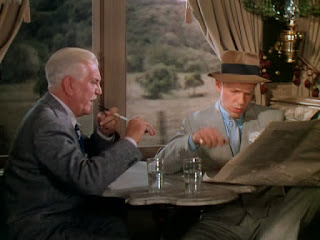 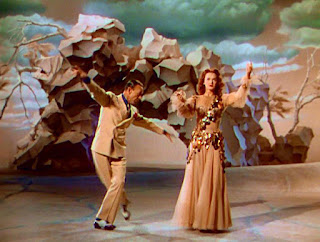 Then the jarring primary colors, and their symbolic portent, bound onto the stage and more-or-less wreck it with a bunch of dumbassed and somewhat embarrassing pantomime on the subject of the high life (e.g., some male chorines pretending to be jockeys riding horses).  Against this is contrasted the extremely nascent promise of a duller but more solidly-founded marriage to Yolanda, a thought expressed openly in the Freed & Warren song, "Will You Marry Me."  ("Surrealism," is it?)  "Dream Ballet" lasts twelve minutes and has its high points (Astaire and Bremer, after all) but they're largely front-loaded, and it only has a few after the primary hues show up.  Even accepting that the violent clash is the whole point, I don't see the use of making it so unpleasant to look at for so long.  Maybe what sticks in my craw, however, is that this very obviously intended to be the film's pinnacle.  Yet it comes at the halfway mark, making everything thereafter an exercise in "what now?", and, perversely, putting it in the middle means the film hasn't done nearly the narrative work it needs to have done for "Dream Ballet" to emotionally land.  Its structural placement ultimately makes it an arguably-pretty (and I have argued it's not) waste of time.
And this isn't anything on the climactic ("climactic") dance routine, "Coffee Time," which uses a stagebound carnivale as a setting for Astaire and Bremer to do a technically-demanding syncopated dance amidst some more chorines with ugly beige-and-primary-colored costumes, atop a Calçada Portuguesa design such as one might find alongside Brazil's Copacabana beach. 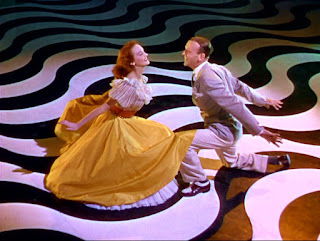 This seems like it should be fine (bold splashes of color against this zebra-like pattern are the basis, after all, for Disney's "Aquarela do Brasil"), except there's something about the abrasiveness of the interplay of lighting, costumes, and shiny, polished floor that make it all faintly repulsive.  Irene Sharaff designed the floor along with all these costumes, so it's as easy to blame her as Minnelli, and the film does indeed have elaborate but frequently-bad costumes.  I don't know who to blame, Sharaff or Minnelli, for Yolanda, a superstitious virgin just out of a Catholic prison for children, deciding to meet her guardian angel in the kind of gauzy, see-through black dress that could only have looked appropriate if the movie had been a porno set at a funeral. 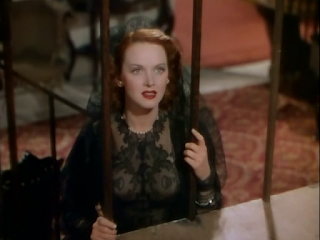 I want to like Yolanda and the Thief, but I can't: it's ineffective even when it's at its most intentional and passionate, which isn't even often; the rest of the time, it barely even feels like anyone actually cared.  (Maybe the film's most representative moment is literally the worst rear projection I've ever seen, using framerate manipulation on the rear-projected footage that's so barbaric that it momentarily looks like God has decided to end the whole world as a punishment for Johnny's blasphemy.)  Far more tentative and mistake-prone, it's astonishing that this was somehow Minnelli's follow-up to Ziegfeld Follies.  It's gotten a bit of a rehabilitation as a wild experiment, a laboratory for Minnelli's style going forward; but even on those terms, it's hard to call it anything besides a failure.
Score: 4/10
Posted by Hunter Allen at 10:45 AM