Seriously, why won't you play Freebird? 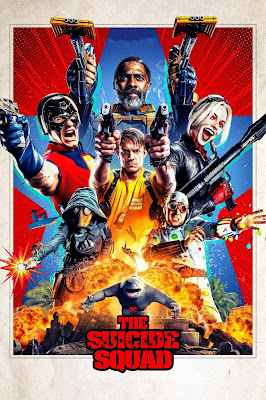 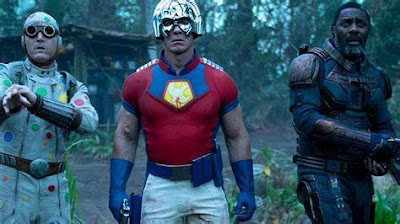 When I was a child, I was confused by the phrase, "they want to have their cake and eat it, too."  I can have cake.  I can eat it.  But if it had been formulated "they want to still have their cake and eat it, too," then I would've immediately understood it.  For its part, The Suicide Squad wants to still have its cake, eat it, jerk off on the cake, and smear the cake all over the wall, too.  So, you know.  It's a James Gunn superhero movie.
The good news is that it easily hops over the low bar set by its predecessor, David Ayer's 2016 Suicide Squad, if by nothing else simply by realizing that its fundamental premise of throwing the DC universe's least-valuable intellectual properties into a meatgrinder is probably best approached (at least as a film adaptation) as a comedy.  The even better news is that the worst thing about it is still its title, confirming the single ugliest sequel title convention in the history of cinema as an actual thing that's happening.  (Coming soon: The Batman.)  Personally, I'd have liked it if Warners had dusted off their old Gold Diggers/Broadway Melody convention with The Suicide Squad of 2021, for wouldn't that suit this particular superhero franchise?  Maybe it isn't "an anthology series" by strict definition, but given the casualty rates inherent to making them at all interesting, and the untold hundreds of B-to-Z-list DC supervillains that each Suicide Squad can throw onto the screen just to watch them die, an "anthology series" is more-or-less what we're bound to get.  (Or no series at all, given the alarmingly soft box office for this one.)  Anyway, the other other good news is that the second worst thing about (sigh) The Suicide Squad isn't even to do with the movie proper, but the marketing campaign that promises it's from the "horribly beautiful mind of James Gunn," which is so self-regarding, even if he didn't come up with it, that it makes me want to eat some jizzed-up floor cake and vomit it into Gunn's hair.
If I sat down and compiled the list, I'd probably have a third worst thing through an nth worst thing, too, but I liked The Suicide Squad, so I'll at least briefly focus on the positive, and the best thing about it has to be its opening sequence.  (Which, in a 132 minute film, is arguably in itself a bad thing, but so it goes.)  Well, we begin with Savant (Gunn's frequent muse, Michael Rooker), whom I guess likes Johnny Cash, or somebody likes Johnny Cash, since The Suicide Squad is no less prone than the 2016 Suicide Squad to fill out its soundtrack with an expansive list of pricey songs that merge together into more-or-less pleasant white noise attending slow-motion walking montages no later than, really, this very opening sequence.  I couldn't name another of Gunn's soundtrack choices in the whole film, anyway, despite having seen it only several hours ago, which means the major way that Gunn's approach to needle-drops here beats Ayer's is that it was organic to his filmmaking process and not as likely to have been foisted upon him with a dictate to "do it more like James Gunn would" during reshoots.  Well, Savant is the latest in a line of convict supervillains to be recruited with the promise of a reduced sentence into Amanda Waller's (Viola Davis's) Task Force X, a so-called "Suicide Squad" led by Col. Rick Flagg (Joel Kinnaman, returning from the first film with 500% more personality, albeit starting from a low baseline), though The Suicide Squad scores a sly joke when Flagg demurs, sticking up for his slave troopers by noting "we consider that term degrading."  Forthwith, Savant, Flagg, fellow Suicide Squad alumni Harley Quinn (Margot Robbie) and Captain Boomerang (Jai Courtney), and numerous other wacky supervillains with sub-par power sets are sent to a fake Latin American country on a dangerous mission, and you'll notice that I haven't seen fit to list most of these guys as if they were major forces in the plot. 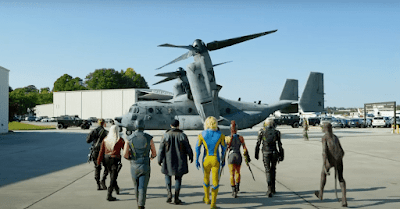 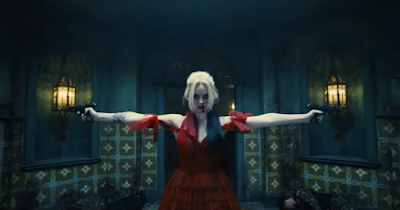 Where it runs aground (and just keeps grinding into the sand) is where it decides to drop its more vignettish structure and start developing plot and stakes more complex than "run around shooting, stabbing, and throwing matter-annihilating polka-dots at everyone we see," which it technically does the moment that "Bloodsport doesn't give a shit about his daughter" becomes "actually, Bloodsport does give a shit about his daughter," though the moment that it connects this to "therefore, Bloodsport gives a shit about Ratcatcher" is the moment that Gunn tries to steer The Suicide Squad toward his usual found-family territory and flounders.  This is an astoundingly insincere film—that first Guardians is both the best thing that ever happened to Gunn and the worst, if it convinced him he was actually good at sincerity amidst glibness and Guardians wasn't a very lucky accident.  The Suicide Squad eventually decides its characters have backstories informing the measliest kind of "pathos," and in some cases this actively undermines what had made them funny.  I won't go through the whole list (I mean, if it's tedious in the film...), but consider Polka-Dot Man's deep-seated hatred of his mother, manifesting in Batesy fantasies of killing her every time he deploys his unexpectedly-lethal power.  It's not even a matter of "do I care why he hates his mother?", because obviously nobody could.  It's a matter of whether the movie benefits from an explanation, or if it only demonstrates cold feet about the idea that animates its first, better half, which is, "hey, you know supervillains are bad, right?"
It's probably worse when it's overtly political, which can be summed up, more-or-less, as "Predator for dumbshits," conjuring a Greenwaldian fever dream of American imperialism so stupid and untethered to anything real, or even anything fictional (this movie serves Amanda Waller just terribly), that I'm not even sure what to make of it, though I'm sure some critics will enjoy the tsking tone of it, despite a set-up that requires Americans to murder brown people by the hundred for laughs.  Not, mind you, because they're brown, but because this movie has a pressing need to murder somebody, and "Corto Maltese" is just where the screenplay development process wound up in pursuit (or in parody) of some 80s action movie bona fides.  "Morality" shouldn't even be a useful standard by which to judge The Suicide Squad, then, but its hard swerve into its own moralizing makes it hard to avoid.  At least the nastiness is authentic; the empathy is only ever fake.  Badly faked and not even slightly imaginative, at that: a movie that spends this much effort pretending to be disturbed by the tortures suffered by its space alien antagonist probably shouldn't end the way this one does.  And somehow that's not even my biggest problem with the finale, which is way too invested in jokes about superhero film third acts to make Starro actually menacing, let alone terrifying.  (Just having it move like a starfish would've been a start.)  It's at least not a boring finale, which, again, puts it up on numerous superhero films: the coup de grâce even finds a justification for that whole "beautifully horrible mind" thing in an image that, credit where it's due, I'd never seen before I saw The Suicide Squad.  It's a movie I often had a blast with, so I don't know, maybe I've just gotten meaner over the course of the plague year and the substandard popcorn cinema that's been offered for, frankly, even longer than that; but it's also a movie that only gets worse the more I think about it.
Score: 7/10
Posted by Hunter Allen at 2:46 AM