What a disaster: So long and thanks for all the carbon dioxide, you NIMBY dipshits 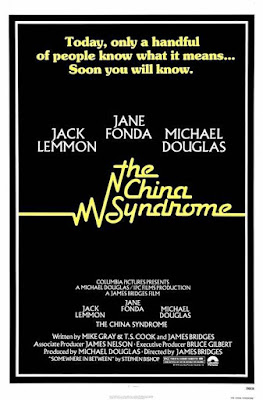 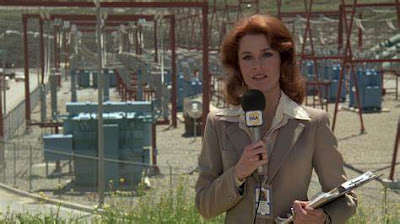 The China Syndrome brings us back to the "what is disaster cinema, anyway?" question, and raises the same problems of giving the whole game away on the basis of its categorization.  It's not a disaster movie by tradition: widely regarded even by snobs as an actual good movie, it surely can't be "a disaster movie" if Roger Ebert gave it four stars, right?  The thing is, it's true, it doesn't quite fit.  (Like Rollercoaster, it might've been cooler if it did.  Unlike Rollercoaster, by no means would it necessarily have been better if it did.)  I'm pleased as punch that it entered my ambit for this retrospective anyway, because whatever it isn't, I love what it is, and that's one of the great 70s thrillers.  Even by this standard, it's an intelligent and grown-up iteration of the trend, as overwhelmingly concerned with its message!—messages plural, really—as any message film that's ever been made, without ever once letting message! get in the way of its characters, its plot, or—extraordinarily—the terrifying might-as-well-call-it-fun of its apocalyptic speculation about a nuclear power plant that might fail so spectacularly that its meltdown could send its core falling into the liquefied rock beneath, through the Earth, and out to the other side.
That, of course, is where its aged-poorly title comes from—a title dropped twice in dialogue and explained once, and, no, that's not even close to how it would work (for one thing, the center of the Earth is already a molten fission reactor).  Even the screenplay immediately admits that's not how meltdowns work, but plainly its authors—director James Bridges along with co-writers Mike Gray and T.S. Cook—were so taken with the Silver Age comic book whimsy of the phrase, invented in 1971 by nuclear physicist Ralph Lapp, that they couldn't resist.  (Gray was, in fact, an engineer, and his contribution is definitely felt throughout in jargon-heavy dialogue that's usually understandable more through tone and volume than pandering explanation.)  It was, despite it all, infamously prescient: just twelve days after after The China Syndrome's release an American reactor underwent a real-life loss-of-coolant test at Three Mile Island.  It passed, sort of.  It at least could have been worse—Chernobyl tested it with a Soviet design (perhaps the shittiest nuclear plant design ever operated), and did so rather less successfully—and while the event caused consternation at Columbia, who thought they could be accused of exploiting the accident*, it didn't stop The China Syndrome from being a huge success.  It earned just a hair under $52 million on a $6 million budget—a hell of a take for an overt left-leaning advocacy film starring "Hanoi" Jane Fonda two years after Star Wars, which, in truth, turns out to be very nearly as concerned with sexism as it is with atomic safety.  But as it's hard to say what precisely turned it into the surprise blockbuster it became, Three Mile Island or its own quality, we might as well agree it was both. 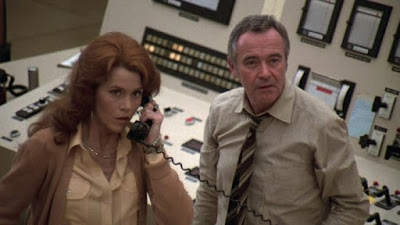 It maintains that quality pretty much the whole time, though it opens unusually well, with an abstracted, mechanistic screens-within-screens gimmick (the very first image, technically, is a test pattern that occupies the whole frame; this is the very last image, too).  It turns out we're inside a control room at WXLA, who've just hired a pretty new reporter, Kimberly Wells (Fonda), to do the most bottom-of-the-barrel human interest fluff that clearly nobody else at the station wants to do.  Right now, for example, she's covering an unlikely-to-succeed start-up that offers singing telegrams, and "operagrams," and, if you can afford it, apparently they'll facilitate your message via bellydancer.  Unseen men discuss Kim out of earshot, remarking on her appearance, which in large part they've manufactured, especially the new red hair she's sporting—in fairness, they consider her body more obliquely and bloodlessly than you might think, but this just underlines how her attractiveness is foremost a business proposition for the company, and as such maybe defines her value to them even more reductively than it would if they did just want to fuck her.
Kim's next assignment is to go out to the Ventana nuclear power plant, and, with no staff personnel available, she brings along her old cameraman buddy, freelancer Richard Adams (Michael Douglas in a beard and long hair that make him look like Jesus in a small town church's Easter pageant), plus sound man Hector Salas (Daniel Valdez).  They're given a tour—she reminds an ill-mannered Richard that "this is coverage, not controversy"—and, as fate would have it, within moments of entering the observation gallery for the control room, an earthquake hits and a scram event ensues, entailing an emergency shutdown and restart of the reactor.  Shift supervisor Jack Godell (Jack Lemmon) and lieutenant Ted Spindler (Wilford Brimley) and their team seem to take this calmly in stride—at first—but soon they realize they've made a very bad mistake as a result of a faulty water level gauge and they may have, oopsie-daisy, uncovered the core.  Now they freak out very visibly, and even though they do manage to save the day, and even though Richard wasn't really supposed to be filming in here by law, when Kim, Richard, and Hector walk out of the Ventana plant, they walk out with documentary evidence of a potentially-disastrous accident that the company would strongly prefer remain under wraps, strongly enough that they lean on WXLA to kill the story entirely, which they eagerly do.
This sits poorly with Richard, who throws a tantrum about it, and it disquiets Kim as well, though she's far readier to toe the line, and maybe she would have, if in the aftermath her bosses didn't insult her to her face and deny her her ambitions to do real, hard news.  It even disturbs Jack, who hates reporters and is deeply convinced that the systems he's dedicated his life to are safe, because in the midst of the scram event he felt a vibration that he is certain means something else is wrong with the plant, and nobody else seems to so much as care.  Of course, Jack's right.  There is something else wrong with the plant, as the whole world will discover sooner rather than later; and, with Kim and Richard's help, Jack's the only person in a position to even possibly stop it, though with the forces of the nuclear power industry arrayed against him, legally and extralegally alike, he probably won't be able to, not even when he takes the only option left to him that could still work. 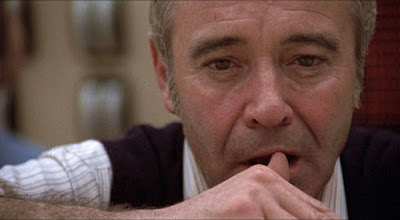