The legendary weapons of China 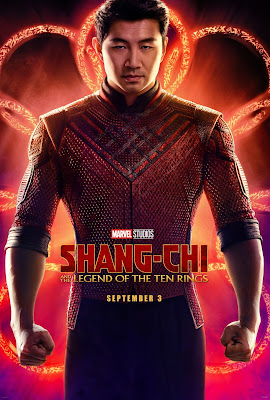 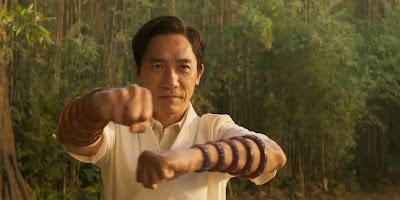 2021 has been just the worst year for Marvel Studios' ongoing campaign to make nerd shit everyone's shit, though their features have (so far) fared slightly better than their Disney Plus streaming shows.  Black Widow glimmered with promise before it fucked up its third act—but they all do that, don't they?  (Well, Falcon and the Winter Soldier is an incoherent slog for the entire duration.  Loki, ill-conceived as that show is overall, at least tries to shake up the formula, getting the "bullshit in the sky" stuff out of the way before a lower-key finale, even if that finale turns out to be a covid-protocol conversation scene that lasts forty minutes and pretends to be philosophical by repeating the same key points eight or nine times.)  I mean, I know: that the Marvel Third Act will always be kind of crap is so widely-accepted as a fact of life that to even complain about it thirteen years in is to brand oneself a bore.  But, I swear, they're actually getting worse.  The upshot is that, for all that I've always believed I had a natural immunity to superhero fatigue, I really may not.  Anyway, Shang-Chi and the Legend of the Ten Rings glimmers with promise before...
But it really glimmers; at its best, Shang-Chi shines.  Things begin with an expositional flashback, Lord of the... well, high fantasy-style, anyhow, and for a few seconds there's nothing to get too excited about, as we're recited the history of an extremely vague and misty version of ancient China, and China's greatest warrior, who has acquired many names but we will later learn was born Xu Wenwu (Tony Leung, the MCU's biggest olive branch to the Film People since Tilda Swinton, but obviously a highly welcome addition).  Thousands of years ago, this man found the ten rings of power—even the narrator does not know exactly where or how—and this has given him the superhuman might to defeat any who dared oppose his conquests.  But somewhere in between, and for no reason the narrator deigns to tell us, this warrior retired to the shadows and his empire became a secret one, and as the rings gave him immortality in addition to power, that empire persisted under Wenwu for centuries, until he turned his attention to realms beyond the earthly, and sought access to realms closer to heaven.  His first target was the mythical village of Ta Lo, a riftland half in another dimension already, hidden behind a living forest that presents as a moving maze, and occupied by magical warriors at least as powerful as he.  Wenwu discovers that the instant he sets foot there, and this is when Shang-Chi actually gets great.
At its heart, if only it had one, Shang-Chi is a love story, and the first person Wenwu encounters in Ta Lo is Ying Li (Fala Chen), possibly charged with guarding the village, though it's heavily implied she's just a random inhabitant out for a walk and Wenwu's arrogance offended her.  Here Shang-Chi earns its wuxia bona fides with a kung fu battle between the precipitous conqueror and the mystic fighter, staged across a stream through a glade, and it's basically everything I wanted The Grandmaster to be but wasn't.  Captured with this particular film's and probably the whole 4000 minute MCU's best cinematography, courtesy Bill Pope, the fight choreography is arrayed to simultaneously evoke beauty, violence, and above all, eroticism, to the extent that it might be fair to call it a Marvel movie's first sex scene, an interpretation Shang-Chi enthusiastically encourages since, as we resume our opening montage, Li's already pregnant in nearly the very next shot.
The product of that union is Shang-Chi (eventually Simu Liu), shortly joined by his sister Xialing (eventually Meng'er Zhang).  The lovers having accepted Li's exile from Ta Lo, and Wenwu having laid down his rings, they attempt to live a "normal" life, but this does not work out.  Li dies; Wenwu renews his plans for global domination, now animated by vengeance, an obsession he inflicts upon his son and heir, as well.  But Shang-Chi flees, changes his name, and puts together a quiet and hopefully anonymous life in San Francisco as "Shaun," where he works alongside his best bud, Katy (Nora Lum), as a hotel valet (given the deeply grating prominence of the product placement throughout a film that is much more about cars than it probably should be, he also appears to have a job as a pitchman for Bavarian Motorworks).  It's around the time we catch back up with "Shaun" that agents of his father do, too, leading him to reveal the almost-superhuman skills his father trained into him in his youth, and sending Shang-Chi and Katy back to China and through the living forest and to his mother's home, where Wenwu has become convinced his wife still lives, held captive by Ta Lo's inhabitants.  They claim, however, that it's only the evil that Ta Lo exists to guard against that's snared him, and only Shang-Chi can put a stop to his father's madness.

The real problem is that Shang-Chi just runs out of ideas, and (I hate to always say this) clearly would be more comfortable being 90 or 100 minutes long.  It's 132, because of course it is, which means that you feel every moment of our heroes' content-free preparation for battle, and keep expecting some convolution to arise.  There's a reveal about Shang-Chi that does, at least, give the hero a bit of moral cloudiness that's fascinating (and would be more fascinating if the film showed it instead of just told it).  Otherwise, no convolution comes at all, even when it easily could.  It's just so frictionless, and emotionally mute, as the characters virtually turn into robots moved by a laggard yet completely basic fantasy-movie script.  While it's no use rewriting a movie they already made two years ago, it's bizarre that a quest to find Shang-Chi's and Xialing's dead mother doesn't interest Shang-Chi or Xialing even slightly, not even in a world where there's magic all over the place and where death is demonstrably not the end, since—as the film even reminds us of early on!—another obsessed man went on another magical quest and brought four billion people back not so long ago.  Anything actually meaty about this exists solely in Leung's yearning gaze and exhausted bearing.  This movie has a dead wife, and sends her grieving husband plunging into the den of a dragon that eats souls, and the dragon that eats souls isn't even a metaphor.
I promise that I do not go into these things looking for problems, and if nothing else, it's rarely actively bad.  In the end (that is, as a rhetorical device to end this review; the pair of ending credits scenes are actually the dullest possible dishwater), Shang-Chi and the Legend of the Ten Rings is a reminder that Marvel can make good content, and I've regained at least some mild, cautious optimism about the direction of the franchise, because they did make half of a great movie here.  I wish it could've at least been the other half, but that's life.
Score: 6/10
Posted by Hunter Allen at 10:53 PM