Try hitting him with the car again, that usually works in cases like these 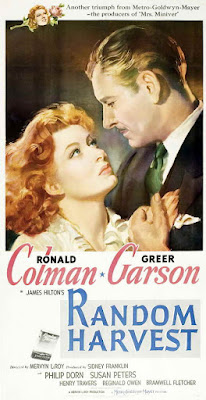 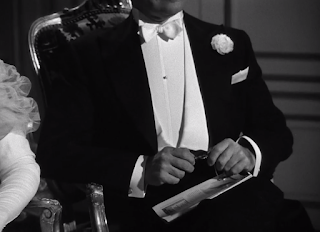 I could be convinced that there is no better thing than a woman's picture from the 1940s, and yet my use of the term (I honestly do not know if it is currently favored or disfavored; my guess would be "favored," but it really would be my guess) perhaps obliges me to define it in some way.  I'm certainly not going to actually do that, because, for one thing, this is not an academic journal (or YouTube channel), and I hope I'm not so boring or condescending that I ever sound like one.  But I wouldn't define it anyway, because it's not definable: like "noir" or "adventure" (or "melodrama," for that matter), it's not truly a genre.  It's a mode, or a mood.  Does it center a woman as the protagonist?  Woman's picture.  And even that's not quite right, or Magnificent Obsession would not count, and Magnificent Obsession* is the only reason I'm not entirely sure, deep in my bones, that Mervyn LeRoy was not the greatest director of them.  What I do know is that, when LeRoy was at his peak, and working in that might-as-well-call-it-a-genre in the early 40s, they were nakedly emotional in the best ways cinema can be, and maybe that's all the definition we need.
Properly speaking, 1942's Random Harvest is not LeRoy's "follow-up" to Waterloo Bridge, the other lynchpin of that whole "greatest" argument.  In between, he'd made four whole films.  We just took a look at one of them, and it's fully possible that any of the other three might have been worthier of my attention than the one I gave it to, that being 1941's "ten nominees is possibly a mistake" Best Picture contender, Blossoms In the Dust, another woman's picture and fairly likeable on those merits if not on many others.  But I can't help but think that Random Harvest grew out of Waterloo Bridge, with both films using World War I to obliquely consider World War II, both shot by Joseph Ruttenberg with splendid attention to light and shadow, both intensely melodramatic, both beginning with love emerging out of the crowd, both premised on men who lost something in their war and both about the women who loved them, and who suffered in war and suffered otherwise.  Both are masterpieces.  And that stacks up a lot of similarities for two films that, despite triggering more-or-less the same physiological response in the human eye, still come off as very distinct.  Waterloo Bridge, at bottom, is a realist story.  It's pitched in a melodramatic register, heightened for the sake of cinema and audience identification; but it's more-or-less plausible.  Vivien Leigh even approaches her starring role there with a certain grounded quality, convincing us that those heightened emotions flow inexorably from her sharply-drawn, wholly-explicable character, entirely relatable and real.  Even as shot through with contrivance as the film's plot surely is, those contrivances reflect the vicissitudes of war and the weaknesses of human beings.  They are not to be unexpected.  They are not—how to put it—stupid. 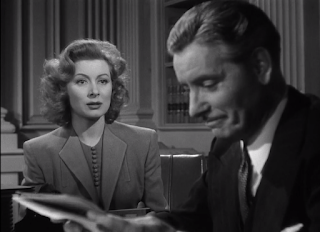 Random Harvest is smart about being stupid (I cannot say if James Hilton's novel is more, less, or as stupid, or uses its foolishness as intelligently), but, I don't know, something makes me kind of perversely happy that one of the prime examples of the woman's picture should bear out every possible sin ever attributed to the form (indeed, to melodrama as a whole prospect), and then turn all of those sins to strengths.  It's so much about its own mechanics it's almost meta—but it is assuredly not.  I mean, let's get it out there: Random Harvest is absolutely absurd, and deliberately irrational, and it betrays not one iota of any awareness of this, presenting its absurdity with naught but the gravest seriousness, which makes it even more absurd than if it were self-knowing and silly.  (Jonathan Rosenbaum called this tone "deranged sincerity," which is a sterling two-word summation.  It is, get this, more absurd than Magnificent Obsession.)  But of course it's absurd.  It's the kind of movie that wants to—to be successful on its chosen terms, must—wrestle with feelings so big they cannot be contained by anything as puny as "reality" or "rationality" or "human personalities," not even the usual Hollywood simulacrum of such things.  It throws so much at you that it arguably isn't even asking you to suspend your disbelief.  It doesn't give a shit if you disbelieve it.  To watch it—at least ideally—is to be confronted with a new and more expansive psychological universe, where every emotion is keener, sharper, bigger, purer, and represented by titanic beings who aren't exactly "people," though they reflect people on a higher plane.
It brazens through your well-considered objections, and, at some point during its 126 minutes, you either have to realize that your objections don't matter, or, I suppose, you should just turn it off.  But if you don't, it's exhilarating.  I can't speak for anyone else, but the audiences of 1942 spoke pretty loudly for themselves, and, for a year, Greer Garson was the biggest movie star in the world; she made two films in 1942, Mrs. Miniver for the summer and Random Harvest for the winter, and both were two of the highest-grossing films of all time, each topping $8 million, a  feat given that in 1942 "the world" had been reduced to the Western Hemisphere, the unconquered parts of the British Empire, and the Free French territories.  Academy rules apparently protected Garson from being double-nominated, and she won her first and only Best Actress award for Mrs. Miniver; I surmise she could have, just as easily, won for this, and if I'd been there I'd have not been pleased with Miniver winning Best Picture when Random Harvest was right there. We begin in the last days of the Great War in Melbridge, England, where victims of shell-shock have been transported for treatment, or, just as likely, containment; amongst those victims is "John Smith" (Ronald Colman), whose generic name already suggests his condition.  He was found in a shell crater at Arras, without identification, and the only thing his doctor, Benet (Philip Dorn), or anybody else has been able to determine about him is that he was a major; for Smith's part, he has simply forgotten.  He can still speak and walk, each with difficulty, especially the former—he has a stutter, which Benet attributes to trauma and lost confidence rather than neurological damage—and, on occasion, they bring in the parents of an MIA officer to see if they might call this man their son.  Disappointingly, they never do.  On the night of the Armistice, celebrations ensue, and in the distraction, Smith walks right out of the Melbridge asylum—no need to break out—and into a vast party engulfing the town.  It is, naturally, overwhelming, but out of the crowd, a woman helps him.  This is Margaret Hanson (Garson), doing business as Paula Ridgeway, a dancer in a traveling revue.  Her showstopper seems to be a very terrible and faintly-offensive foray into cartoon Caledonica, and the man she has no choice but to call "Smithy" seems to agree with that assessment, as the strain of watching her show from the wings renders him unconscious.  Her sympathies now even more enflamed, Margaret tries to get Smithy a position with her revue, but the stigma of his, well, recent escape from a mental hospital precludes this, and her boss even tries to get him to go back.  Smithy will have none of it, and lays him out, and Margaret renders the fugitive to the countryside, and here they fall in love—if they haven't yet, though Margaret almost certainly has—and they wed.  Smithy pulls himself together, sans memory but otherwise fully functional.  They have a baby.  He becomes a writer.  And then...
There are two twists in Random Harvest—three, counting the very ending—and I want to talk around them and as generally as possible because it's a flatteningly great film that not everybody has seen, but the first one is more of a deferred premise than it is a twist.  For, you see, when Smithy is invited to Liverpool to interview for a staff writing position, he's struck by a cab, and this is indeed the cure that had eluded Dr. Benet for so long.  "Smithy's" memories come flooding back—he is, in fact, reset, and briefly thinks he's still in France—and it turns out that he is and always has been Charles Rainier, son of a great family, and, with his parents' passing, heir to the great estate of Random Hall.  Wandering off, and otherwise unhurt, Charles now remembers everything he'd forgotten.  But he does not remember the last three years—Margaret, his country home, his son—at all.  The man Margaret married is erased.  But Margaret—of course she remembers. 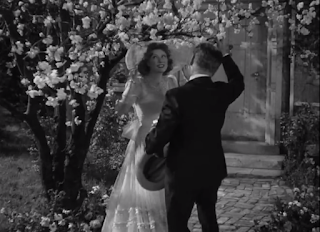 This is peak "amnesia as a plot device," and the shocker is that it came so early in pop cultural history, really leaving amnesia nowhere further to go till, I guess, Nolan got innovative.  It is, of course, a lot.  I will not nitpick this whatsoever (I do not believe it necessary to state "this is not how retrograde amnesia works and retrograde amnesia is barely real in the first place," and you must simply roll with it), though it's almost a blind for everything else that's absurd swirling around that amnesia.  It's almost violently contrived.  I won't harp on that, either, but please, you must allow me one, so if I had to pick the most glossed-over detail of this screenplay, it seems like "major, MIA near Arras in the summer of 1918" would narrow things down quite considerably for "Smith's" doctor and for Charles's grieving parents, who apparently either preferred their son dead to spending even one penny of their own fortune on an investigation, or simply didn't wish to cause any fuss.  Overall, it seems, there has never been a place easier to disappear into in all human history than Great Britain between 1918 and 1921.
This probably gets at some incidental truth itself, and Random Harvest is "about" the war in incidental ways, though my impression is that Hilton's novel is far more concerned with the war that was and the war that had just begun (the film, though stretching across time, does not quite reach WWII), as well as with the brutalization of Britain and the yearning for simpler, easier times as reflected in Charles's pastoral interlude.  I like Hilton, and I'm sure I wouldn't mind reading his book.
LeRoy's film spends enough time with Charles, and indeed begins with him, at an asylum so superbly-designed you almost want to spend more time there (Cedric Gibbons and Randall Duell do strong art direction throughout, but the asylum is maybe the best), with LeRoy emphasizing the emptiness of Smith's static, present-tense existence with an unnerving amount of compositional headspace and walls that seem to climb forever, probably the single most significant background detail of the film being the bizarre, almost surrealistic long clock that stretches up one of those walls into obscure shadows; but the whole opening is fantastic, shot by Ruttenberg with moody side-lighting, diffusive fog, and the threatening silhouettes of dead wintry trees surrounding Colman, before LeRoy throws a thronging crowd into the mix and things become even more oppressive than they were in the haunted-feeling asylum.  The only ray of hope, metaphorically—and in a literal sense, the most prominent source of reflected light in her close-ups—is Margaret, and the sympathy she shows the man she'll love. 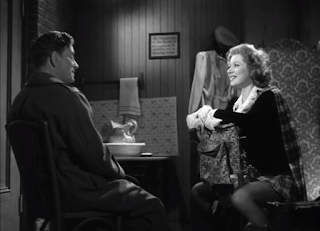