Sleeping, yes, but only a rather ordinary 5'10" 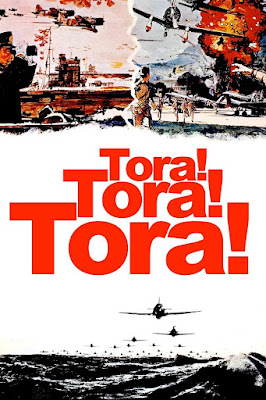 Sometime in the early-to-mid-60s, maybe as early as the end of 1962, when the release of The Longest Day had vindicated his belief in the box office power of experiential World War II movies roughly as long as the war itself, we find 20th Century Fox's walkabout producer, Darryl F. Zanuck, conceiving of an even more ambitious companion piece.  As The Longest Day had told the story of the most famed American combat of World War II, the new project would tell the story of the most infamous, and there are other pleasing symmetries as well: the nearest-run yet the farthest-ranging American victory of the war, set against the most ill-fated of the Axis's triumphs; the climax of America's war in the Western European theater, set against the savage sight of that war's birth in the Pacific.  This was Tora! Tora! Tora!, only finally released in 1970, and titled after the semi-coded exclamation uttered by a Japanese commander at Pearl Harbor to indicate surprise had been achieved, and which we'll therefore call T!T!T! for short.  (We will not.)  Tora! would've remained reasonably ambitious even under an approach of default conventionality; but Zanuck, under a self-imposed obligation of "fairness," ventured afield, all the way across the ocean to America's former adversaries, looking for a Japanese studio willing to contemplate a co-production with Fox (finding them in Toei) on a movie that would tell the story of the Pacific War's beginnings, but now from both sides.
One can overstate how radical this proposition was, and possibly Zanuck didn't even come up with it: 1965's None But the Brave, the first Japanese-American co-production (unless that was Frankenstein Conquers the World), did exactly the same thing, only with a fictionalized small-unit conflict, taking its title from a line of poetry, "None but the brave deserve the fair," though John Dryden's use of the term "the fair" refers not to "objective evaluation," but to "the hot; the fuckable."  Likewise, 1968's Hell In the Pacific, though not an international co-production, bears its own similarities.  And neither of these movies were especially successful—nor would Tora! itself prove to be—so let's give Zanuck credit for pursuing passion, despite a marketplace that had already voted against it.  It helps that I like his movie.  I assume I'd be ruder about its profound weaknesses as a commercial proposition if I didn't.
These weaknesses, after all, are easy to see.  Upon release, Tora! performed middlingly on its $25 million budget (it earned $37 million back, which wasn't nothing in 1970, but not great in terms of its movie math).  It received a critical drubbing, too, garnering scattered praise for the Battle of Pearl Harbor that occupies the last thirty minutes, while also prompting a great many synonyms for the word "boring" to describe the experience of watching the 114 minutes preceding it.  (Myself, I'm basing this review on the slightly longer Japanese cut.)  Tora! also hit a few other snags: there was some grumbling that its lack of editorializing or contextualization had the effect of glamorizing Japanese aggression, which I suppose is almost undeniably true, because frankly the IJN comes off incredibly bad-ass in this movie (the biggest slice of its non-American box office, incidentally, came from Japan, and make of that what you will); there has also been a persistent sense that this film, predominantly about Americans being clumsy and bad at war, hit American theaters at the worst possible time it could have.
I'll come back to glamorization (but not to any resonance it has with Vietnam, as I'm sure the answer is "none"), but for now let's deal with "boring": maybe?  I mean, I'd argue it's not; but, contrary to my usual practice, I won't get indignant.  The film wound up distilled through several different producers' sensibilities: Zanuck enlisted his son Richard D. Zanuck, and in turn Richard enlisted Elmo Williams, who might've turned out to be even more serious about the project's deliberate reserve than Daddy Zanuck had been—Tora! almost seems to intentionally limit its target audience.  But while I'd never want every war movie to be like this, I'm glad this one is.  Tora! is for the grognards, the kind of dude whose conception of historical conflict is more about teams of rival administrators than groups of rival armed men, and whose conception of groups of rival armed men is more about little rectangles than actual people.  A downright shocking percentage of Tora! is staff officers looking solemnly and portentously at maps.  This is not to discount the sometimes very interesting and cinematic ways Tora!'s own various teams of administrators managed to film these maps!  But there's a scene involving actual tabletop wargaming here.  This is above and beyond the numerous other scenes that merely resemble tabletop wargaming.  And Tora!, of course, is also for the military aviation enthusiast—obviously, there's some overlap there.  This aerial component was supposed to bring it in line with populist, blockbustery entertainment; but then, it also does take its time in getting there, doesn't it?

It's a very pure strain of docudrama: near-as-damnit recreations of fact-based scenes on the twin subjects of the diligent, godlike planning of the Pearl Harbor attack and the hapless dithering that led to it being such an overwhelming surprise.  The former involves Adm. Yamamoto (So Yamamura), promoted out of the way of political elements that apparently want to kill him for being the closest thing Imperial Japan had to a "dove," who understands that if Japan wants to have a prayer in hell of winning a war with America, the U.S. Pacific Fleet needs to be hobbled at the outset.  The Japanese strand of the production follows the preparations carried out by his subordinates—including, notably, Lt. Cdr. Fuchida (Takahira Yamura), a happy warrior and the commander of the aerial strike force, Adm. Nagumo (Eijiro Tono), the cautious commander of the First Air Fleet (aka the Kido Butai, aka the IJN's six big carriers, Akagi, Kaga, Soryu, Hiryu, Shokaku, and Zaikaku*), and Cdr. Genda (Tatsua Mihashi), air staff officer for the First Air Fleet and the nuts-and-bolts mastermind of the attack.  (We are invited to recognize Genda as a visionary genius above all others, very possibly as a consequence of Genda working—uncredited and incognito, for reasons you can guess—as a consultant on the Japanese side of the script.)
The American side is necessarily less laser-focused, and in some respects becomes an anti-procedural, in that people are constantly doing stuff but not achieving much, or achieving suboptimally, given their needs—for example, a new radar unit, whose chosen siting is vetoed with a shrug by officers of the U.S. National Park Service, and whose personnel shrug in return and set up shop elsewhere.  The American plot encompasses the various threads of failure that contributed to the Pearl Harbor disaster—the diplomatic failure, the intelligence failure, the military failure—while trying very hard to not second-guess those failures, and especially to exculpate Adm. Kimmel (Martin Balsam) and Gen. Short (Jason Robards) in Hawaii from any particular blame.  To the extent the movie has a thesis besides "Japanese naval aviation was amazing," it's as a work of anti-mythmaking, cleanly and concisely laying out how the Japanese determination to strike created a pronounced informational asymmetry, and suggesting that while eternal vigilance might be nice, it's also an impossible standard to be held to.
That's why Tora! is curious; but not why it's ambitious.  The ambitious part is that the two sides of this story were told by two wholly different filmmaking teams on either side of the ocean, with ultimately fully four directors involved, one American—Richard Fleischer—and two Japanese—Kinji Fukasaku and Toshio Masuda—being credited, and another Japanese director, Akira Kurosawa, not being credited, insofar as he ran off, or was chased off, two weeks into shooting.  The production history of Tora! makes the master sound, frankly, like an asshole—he's the reason Toshiro Mifune wasn't seriously pursued (otherwise he would've been), because by this point Mifune would've agreed with that assessment—and the stories Fleischer recounts are bizarre, especially Kurosawa's initial insistence on casting random industrialists as the Imperial Japanese principals, for reasons that probably had some hazy Bad Sleep Well thematic justification in Kurosawa's mind but remained opaque even to his Japanese collaborators.  (The elder Zanuck had gone along with it briefly out of deference, and perhaps out of similar impulses—Tora!, unlike Longest Day, is remarkably star-less, and star-less on purpose, to remove any distraction from the realism—but Fox nevertheless did hire actual actors.)  Fukasaku and Masura inherited the Japanese half, and they got along better with their trans-Pacific partners, though not so well that Fleischer didn't have cause to grouse that they were stingy with their celluloid, effectively "editing" on-set by offering no coverage, when the editing, by agreement, was to be done at Fox.
I'd not have known that without Fleischer's tales out of school: it's a rather successful example of welded-together cinema, sometimes clunky, but even then, productive about being clunky.  If Fleischer sounds like he could be ungenerous to his Japanese colleagues, his film argues strenuously otherwise: I realize that my own personal opinion, "Richard Fleischer was one of the most interesting stylists of his day," is an extreme minority take, but the interesting thing about Tora! is how astonishingly little style he pursues here, ceding it entirely to Fukasaku and Masura, and all by design.  When Fleischer saw what his counterparts were up to, it impressed him, and he decided that it would be best if their disparate parts of the film felt disparate, too.  And so Fukasaku and Masura deploy what you could call a visual scheme stereotypical of mid-century Japanese cinema—it winds up feeling fairly distinct anyway, by virtue of being mostly set aboard an unbelievably big mock-up of the battleship Kongo, as well as on a USN aircraft carrier standing in for the Akagi (and by virtue, or vice, or both, of Jerry Goldsmith incorporating Japanese-ish cues into his score)—but in any case boxy and rigid, their subjects arrayed in geometrical formation, sometimes not for any overt narrative reason, frequently reminding you of the IJN's hierarchies, their typical camera set-up being level, their typical scale being medium-long, and all of it intended to impress upon you the clockwork-fascist precision of the Japanese war machine as it gears up.  The upshot is, as noted, the IJN comes off irresponsibly cool, but in ways perhaps this specific picture requires; I don't know, perhaps it's a commendable aspect of the American psyche, that we can admire our historical adversaries, though I suppose it sometimes also gets us into trouble.