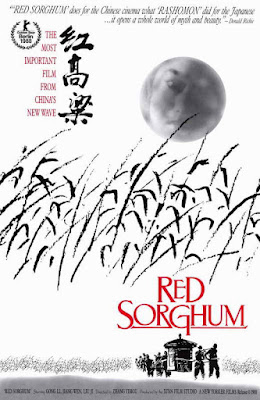 It is perfectly appropriate to call 1987's Red Sorghum, Zhang Yimou's directorial debut, his "first film," but it's customary to mention that it wasn't by any means the first film he worked on.  That honor goes to a thing for children called Red Elephant, which Zhang photographed back when he was still attending film school in loaned-out space from the agricultural college in Beijing, as they prepared to graduate their first class since the Cultural Revolution had shuttered the institution.  Even scholars don't care about Red Elephant, though if I wanted to be glib maybe I'd speculate it led to his very intense fascination with hue, or at least putting the names of colors in his movie titles, which would include something like half his filmography.
Or maybe that could be pinned instead upon one of his first post-graduation films as a cinematographer, 1984's Yellow Earth—his very first professional gig had been shooting 1983's One and Eight for Zhang Junzhao at the Guangxi studio in southern China, and the following year his success on that film earned him the position of DP on the directorial debut of the man that you could, if you wished, call Zhang's rival, Chen Kaige.  They'd been classmates, and were and presumably still are friends (he was never his nemesis; apparently that slot was waiting to be filled by Wong Kar-Wai).  But they were also in many ways opposites.  Chen was the child of respected Communist Party members; Zhang was from a Kuomintang family and has labored under their inherited suspicion his entire life.  Chen was two years Zhang's junior, and had little trouble getting placement into the director's program at the film academy; Zhang was over their age cut-off and had to beg to be let in (which is how he's basically Spielberg's age despite his filmography being fifteen years shorter), and then they put him in cinematography.  On the other hand, both of them are most-beloved in the West for shit they did with Gong Li thirty years ago; so they have that in common.
But then there's Yellow Earth itself, which is one of the most important Chinese films ever made, kicking off their so-called "Fifth Generation" of cinema, though thanks to Mao, there was never a Fourth Generation to speak of.  It's maybe not too much to say that it was the very first mainland Chinese movie that any significant number of Western tastemakers ever noticed.  For such an important film, Yellow Earth is hard to watch today—by which I mean it's literally difficult, because while it's on YouTube it's only available in a deeply compromised form.  Very deeply: it looks like a movie that was recorded on a wax cylinder rather than celluloid, then digitized onto a floppy disk, and then taken into a video editor and framed wrong.  So I cannot speak to the qualities that captured the attention of the artsy-farts of my civilization, as these are predominantly visual, bound up in the bleak desolation of Chen's compositions and the rich colors of Zhang's photography.  I can only speak to the story, and Yellow Earth set a certain set of parameters for early Fifth Generation cinema, with its neorealist impulse to capture the lives of forgotten women and men scraping out their existence at the lowest levels of Chinese society, but putting more poetry in it than communist propaganda, and removing the triumphalism.  And it's... fine.  Frankly, it's the kind of movie I have a hard time respecting—it's right-sized for its purposes at 87 minutes, so I can give it a smidgen of regard—but as Preston Sturges would tell you, it's not serving the higher purposes of its art form.  Any idiot can point a camera at a girl living under patriarchy and rural poverty and make that kind of sad.  It takes a real genius to make you cry over the tragedy of a talking cat.  (Happily, I am speaking about the same filmmaker.)
Yet stories of desperate Chinese peasants turned out to be surprisingly brisk and prestigious business; after Zhang and Chen parted ways and the former had relocated to the Xi'an studio in his hometown to be a director in his own right, Zhang naturally did yet another desperate Chinese peasant movie.  If I've belabored Yellow Earth it's because practically everything that Chen had done in his desperate Chinese peasant movie, Zhang did the opposite.  Yellow Earth is reserved, observational, and, other than its peasant song soundtrack, quiet.  It's also dignified.  Red Sorghum isn't any of those things.  I suspect Zhang was conscious of how he was zigging where Chen zagged, because while maybe it's just that the films' respective source materials didn't leave him other options, Red Sorghum at least begins exactly like Yellow Earth began (and, for that matter, ended).  It's rather less inspired by the prospect of trying to use cinematography to make moving Wang Hui landscape paintings, but it's still shot and designed in much the same way: a red sedan carrying an unhappy woman across a yellow dusty desert to a marriage to a husband she's never met.  However, in this one the sedan-bearers start razzing her almost the instant we make their acquaintance, jostling her around till she almost pukes in her box, then indulging in some gentle ribbing about how she's off to marry a leper, whereupon she'll probably get leprosy herself and die.