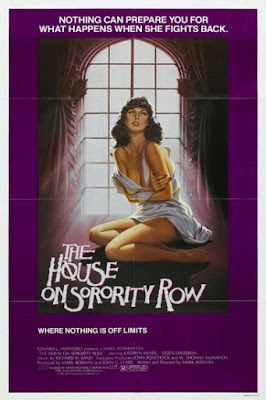 THE HOUSE ON SORORITY ROW

It's October again!  And that means it's time for Kinemalogue's annual crossover with Brennan Klein's Popcorn Culture, which is still just about the best blog you could ever read, while Brennan has in the intervening year gone from "horror media expert" to "horror media professional."  So, just like last year, from now till Halloween, I'll be pretending to know what Brennan knows and reviewing some rad 80s slashers, while Brennan will review some swell 50s science fiction!  Let the mayhem begin! 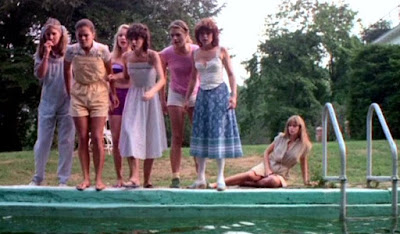 The first and pretty much the only thing that you really need to know about The House on Sorority Row is that, until the last twenty minutes, it sorta sucks, and in ways that seem completely avoidable given the obvious skill level of the talent involved behind the camera (if never—ever—the talent in front of it, nor in the ADR booth).  But that ending, if not enough to totally redeem what came before, is absolutely worth watching, possibly just on its own, because it's kind of amazing.  Turns out I even knew this myself before going in, having read about the fucking thing at least twice—maybe three times!—but I'd forgotten.  Yet the very moment that Sorority Row's kaleidoscopic freakout of a final girl sequence begins, well, you bet I remembered.  And at that point, I strapped myself in for a cinematic roller-coaster ride—and I don't use that particular metaphor just as some cliche placeholder because I'm a hack writer with no imagination (at least not solely for that reason), but rather to impress upon you once again that the foregoing one hour and ten minutes of the film is very much like waiting in a very long line at the only decent attraction in a heavily-attended yet awfully run-down amusement park.

Our wait begins in the Blue Dimension.  Intended to be shown in the black-and-white it was actually filmed in, Sorority Row's prologue was instead changed by its idiot producers to a blue-tinted abomination that exacerbates everything that already wrong with Tim Stuhrstedt's unaccomplished cinematography.

But this is how we start our movie anyway, and so, back in Azure 1961, we find a woman giving birth by cesarean section, while her doctor, Kent, speaks not-as-cryptically-as-the-writers-think about the failure of the resulting infant. This scene exists solely to set up its easily-guessed Dumbassed Twist, a pointed reversal of Friday the 13th.

From blue to the fiercest shade of pink, then: once past our prologue, we are thrown directly into the frilliest depths of a credits montage that wants you to know, down to the very core of your soul, that every last member of our principal cast has two X chromosomes.  And yet I suppose that in a genre that trafficks in transphobia every chance it gets, this is useful information to have.

So, welcome to Theta Pi, and meet the girls.  Though as near as I could tell we don't actually learn about half of these women's names till after they've already been dispatched, the graduating class of our sorority comprises six women: Kate, the down-to-earth one who hasn't figured out what she's going to do with her life, but whom we'll learn has a moral compass that always points somewhere in the vicinity of true north, and hence is our Final Girl; Vicki, a much more impulsive and vindictive sort, who likes guns, dick, and cruel, even felonious vengeance; and four more white girls without a personality between them, Liz, Jeanie, Stevie, and Morgan, with only the latter distinguished in any real way thanks to some gorgeous 1940s starlet-style blonde hair, along with a very sexy party dress and a willingness to discard it for the briefest flash of sideboob and sidenipple. 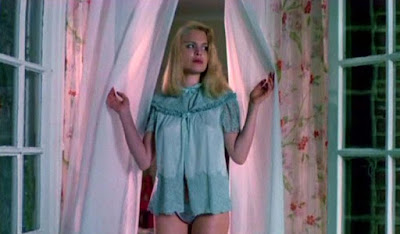 Our old friend Johnny Slasherfan loves tease-and-denial most of all.  He's twisted like that.


Soon, we find Vicki breaking the house rules and bringing a boy up to christen the new waterbed her father bought her (it's little touches like this, where a conscientious dad buys his daughter a device principally intended for novelty sex, that make the first part not completely unenjoyable).  And this raises the ire of Theta Pi's draconian house mother, Mrs. Slater, who by no coincidence is the woman we met in the prologue; it may be worth pointing out, too, that her last visit with her old doctor involved a lot of brain scans that indicated that somebody is on the cusp of dementia, and maybe even a nice mad slasher rampage.  That's why it's something of surprise that Mrs. Slater limits her initial assault to merely hacking Vicki's waterbed to pieces with her rather dangerously sharp cane.

Vicki won't stand for this, nor should she, but instead of filing a complaint with the appropriate authorities and settling the seemingly-inevitable lawsuit against the deep-pocketed university for a few ten thousand dollars, while likely sending Mrs. Slater to spend at least a few months of her golden years in the state pen, Vicki hatches a zany scheme, involving the offending cane, the sorority house's dirty pool that Slater has refused for ages to clean, and a gun loaded—she thinks—with blanks.  She's wrong about that last part, although thanks to the resolute cheapness of Sorority Row and the lack of a cool squib or even a dyepack, I didn't realize this till more than halfway through the film, when they mention the live bullet in dialogue.  Instead, I was under the impression that the ancient woman had simply had a heart attack, and wondered why they were so keen to dump the body in the filthy pool before the guests arrived for their bitchin' graduation party. 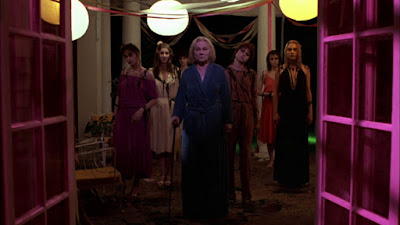 
Sorority Row winds up something of a riff on Henri-Georges Clouzot's 1955 semi-classic The Devils, possibly by accident, but probably by design, since you get the sense that director Mark Rosman—whom legend has it was uncommonly dedicated to seeing his vision through—really does know his stuff.  While the typical frame of Sorority Row is pretty mediocre thanks to a combination of artless nighttime lighting and that cheap filmstock that you just can't get away from in the low-budget movies of the early 1980s, there's flashes of competence that surpass the average not just of slasher cinema, but cinema generally.  Notably, there's one really great long take, composed of a series of pans from one face to another in a sea of reveling partygoers, as each girl looks at the next in line and, to the best of their diverse acting abilities, sells this moment of gut-wrenching fear and guilt, while the surprisingly good New Wave band they've hired plays an incongruously peppy tune.  I had also somewhat enjoyed the set-up for Vicki's revenge, which plays the aged and childless Mrs. Slater, whose "only desire in life" was to have a child, against all our young heroines, who have aspirations far beyond their biology, and use sex principally as just another way to enjoy the world.  And this concludes our far-ranging discussion of the deep themes of a movie that doesn't have any.

So let the murders begin!  And it's at this point Sorority Row descends into what seems like apathy, and even though we'll see later that this obviously can't be the case, it certainly doesn't instill much of any other feeling in me.  Sorority Row arrived in 1983, after the MPAA's infamous crackdown on exploitative screen violence, but you get the feeling that the strictures suit Rosman just fine, since that means he doesn't have to pay for death scenes that involve anything more than ketchup—and sometimes they even run out of ketchip.  Maybe I just haven't seen enough slashers, but Sorority Row has, in general, the worst-staged murders of any that I've ever seen, including one that's just lamely shadow-puppeted onto a freaking wall, like Don Diego Vega was in town. 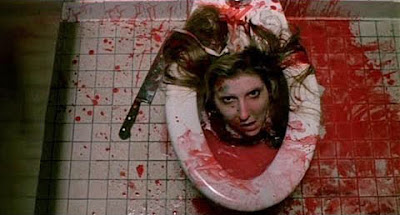 But after a daring daylight raid on the McDonald's condiment bar, Rosman was able to achieve one righteous kill.

Without acting or well-developed tension to pick up that slack, Sorority Row's middle section therefore drags something altogether fierce; but ultimately it's Katherine who's left the last woman standing.  And then something really happens: Dr. Kent interjects himself the proceedings to recover the evidence of his crimes against science and God, and in the process he injects Katherine with a syringe that's chock full of fantastic filmmaking.  Adding another malpractice lawsuit to what I'm sure is a very full docket, he intends to use poor Kate as a lure to catch the monster he helped create.  Unfortunately for him but very fortunately for us, what he tells her was "a mild sedative" was evidently mislabeled at the pharmacy, since the effect is indistinguishable from a fast-acting hallucinogen.

Everything changes as we enter the phantasmagoria: the editing goes haywire, with a heap of genuinely distressing jump cuts, match cuts, and flashbacks with the details changed, while lensing tricks are employed to emphasize the new plasticity of Katherine's world—and even the lighting seems to improve with a newfound luridity.  Everything that happens in this last twenty minutes suddenly turns Sorority Row into a film worth the price of admission. 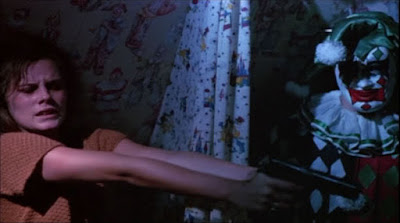 (Which was zero, since it's on both Hulu and YouTube.)

What I can't necessarily claim is that it's worth your time.  Yet I don't feel as if my own was wasted.  If I hesitate to fully recommend the film, don't let that make you think I didn't, in the final analysis, kind of enjoy it.

Killer: Eric Slater
Final Girl: Katherine
Best Kill: I mean, it's Jeanie, who's decapitated, but we catch up with that fact so much later that it's hard to rightfully say it's part of the kill sequence proper.  Therefore, I'm forced to choose the second best kill, which was Vicki's waterbed.
Sign of the Times: Vicki and her boyfriend use a condom, like a pair of nerds.
Scariest Moment: The choreography of the various specters who parade through Katherine's drug-addled mind like a host of rotting pink elephants.
Weirdest Moment: See above.  In Sorority Row, they're essentially inseparable.
Champion Dialogue: "Here's to my mother, who never let me forget I was born with a silver spoon in my mouth.  Mother, you were wrong—it's up my nose!"
Body Count: 10, including the killer, maybe?
1. Mrs. Slater is killed by a magic bullet
2. A random urinator gets a tracheotomy
3. Stevie, murdered by Zorro in a hardlit basement
4. Morgan, impaled
5. Debbie, sliced and diced
6. Jeannie, disarmed, stabbed in the throat with her own knife, ultimately beheaded
7. Liz, throat slit, tossed in the grave they were digging for Mrs. Slater
8. Vicki, pummeled with the cane, tossed into the same grave
9. Dr. Kent writes himself a prescription... for death
10. Eric, stabbed, falls out the attic, but his eyes flutter open, but there's no sequel, so you tell me, smart guy
TL;DR: The House on Sorority Row begins well enough, falls into a dull routine, but crawls right back out of the grave with its bravura final girl set-piece.
Score:  6/10
N.B.: Brennan has much more favorable things to say about The House on Sorority Row, having discussed it further on his podcast and even scored an interview with Mr. Rosman, which is a pretty fascinating thing, given the trajectory of his career, from the schlocky remixer of old French thrillers to the director of all those kid-friendly Hillary Duff movies.  Check it out, along with all the other episodes of that selfsame bitchin' podcast, Scream 101.

The old switcheroo!
Brennan's Cardboard Science:
Invaders From Mars
The Day the Earth Stood Still
Them!
The Giant Claw
The Brain From Planet Arous