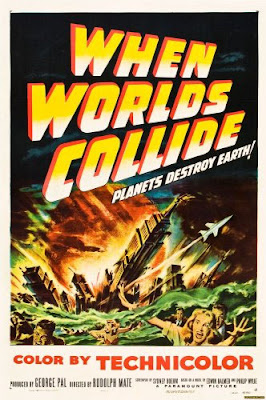 George Pal teaches us that contemplating the destruction of all we know can actually be a pretty swell time. 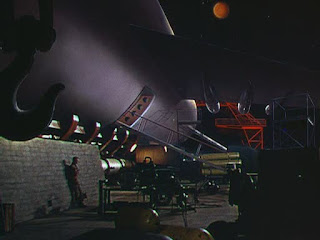 When Destination Moon hit (and, for such a math-centric endeavor, it hit surprisingly hard), the film's producer George Pal found himself at the very forefront of one of the 1950s biggest trends—and, since this is Cardboard Science, I obviously must mean awesome 1950s science fiction.  As a businessman, it made sense to follow the trend he'd helped start, and so the very next year he arrived with a follow-up to Destination Moon's examination of hard-science spaceflight.  Both less hard and less focused upon the actual spaceflight, it would nonetheless be a film that proffered an even better reason for building a bitchin' nuclear rocket than Destination's dire prospect of a Soviet flag upon the moon: sooner or later, a rogue star is going to smash its way through our defenseless solar system, and if we don't have some sufficiently robust space travel technology when it does, it's going to kill every last mother-loving one of us.  Even Barbara Rush.  And that would be truly horrible.

This is where we start in When Worlds Collide, which opens with a brief narration about the multitude of stars in the sky before turning to a remote South African observatory.  There, a team of astronomers has come upon a most disturbing discovery; however, they require confirmation, and so they entrust their findings to a desert-hopping courier pilot by the name of David Randall, who speeds their results to one Dr. Cole Hendron in United States, while he himself remains as ignorant of the true nature of his mission as we are.  (Theoretically, anyhow; as a practical matter, I doubt anybody who's ever seen this film on purpose found themselves legitimately taken off their guard by this first act "twist."  Gracious, if nothing else, the globe-shattering premise is flatly stated within the title itself.  Still, one appreciates the effort to maintain a little bit of a mystery around the cosmic proceedings of the plot, and I'd be very hard-pressed to deny that it works.)

Well, if not for the loose lips of Hendron's daughter Joyce, David might have remained none the wiser; but when she arrives to escort the courier from the airport to her father's lab, she assumes he knows all about the end of the world.  Savvy, he plays along—and this puts him in the circle of men and one woman who confirm the observatory's results with their computers.  A star is barrelling through the void toward the Earth.  One of its planets, dubbed Zyra, shall arrive first, and it shall shake the Earth with its passing.  But when the star, named Bellus, makes its appearance, it shall swallow our world whole, drowning it in solar flame.  And we shall be no more—a spark of consciousness in the universe, snuffed out for all time.

Or so it would seem, but not if Dr. Hendron and the scientific-industrial complex have anything to say about it.  Though the world's governments react at first with incredulity, a number of private capitalists approach Hendron to help him build his proposed fleet of arks, thereby transplanting a small fraction of humanity to the surface of Zyra as it passes.  Unfortunately for everyone, this group of wealthy donors includes the wheelchair-bound Sydney Stanton, a vicious misanthrope who agrees to fund the project only if he gets a seat aboard.  Hendron reluctantly agrees—but he shouldn't be quite so condescending to the man, given that he has likewise made room for himself, and for his daughter, and for his daughter's boyfriend Dr. Tony Drake.  Oh, and just this moment, he's also reserved a seat for the new man that his daughter's starting to fall in love with—that rakish courier pilot who brought them the data in the first place.  The remainder of the film shall be largely dedicated to David's reluctance to take his spot aboard the spacecraft, given his (largely correct) feeling that he has done absolutely nothing to earn a right to survive superior to anybody else's.  Of course, our hero's ethical backbone shall be contrasted most profitably with the selfishness of the industrialist Stanton, as well as those who will not be saved, and who turn against one another in their desperate effort to get aboard that ship.

More than anything else, then, When Worlds Collide is a disaster movie, a genre that has existed since pretty much the beginning of cinema, even if it only hit its true artistic peak under Irwin Allen in the 1970s.  But more specifically, When Worlds Collide is so similar to Roland Emmerich's 2012 that if anyone ever wanted to press the case, a court could plausibly determine that the disaster genre's degraded modern master probably owes the estates of George Pal and screenwriter Sydney Boehm money.  On the genre's own terms, however, Pal's film pales in comparison.  In most respects, this is simply unavoidable; the visual effects technology of the time was not capable of pulling off realistic disaster spectacle.  Nevertheless, there are times when "it was 1951" isn't a complete excuse; I mean, it's not like 2012 is especially "realistic" either, but when Emmerich promises destruction porn, Emmerich delivers.  Whereas Pal's film refrains from more than a single scene of awesome global destruction, and its highest apocalyptic spectacle is confined solely to two or three shots.  (Indeed, the most arresting images all involve matte paintings of the ship under construction, not devastated cities.  And if there's one thing you really want from When Worlds Collide, it's a lot of devastated-city matte paintings, a modernist disaster film done with the charming old-school techniques that were available in 1951.) 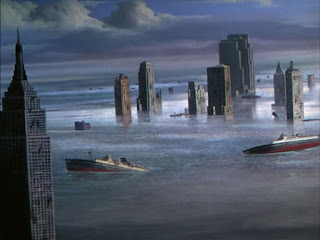 I mean, this is pretty awesome.  Do I sound ungrateful if I want more?

On the plus side, though, When Worlds Collide is a quick sit.  (And that is something you could never accuse 2012 of being.)  No, at 82 minutes, you can't blame a movie too much for not overindulging in the felling of skyscrapers.  Instead, it's over so quickly all you're left with is the film's cool central idea more-or-less well-realized, along with a great many effective glimpses of humanity amidst the film's more procedural elements.  When Worlds Collide is extremely likeable in this last regard, offering solid performances from all sides, and a rather strong central protagonist in David, whose moral quandary reflects the overt moral disquiet that the whole film soaks in.  In truth, it alludes to its central themes more than it really explores them—it is almost more entertaining as a starting point for your own speculation than it is as a piece of speculative fiction in itself—but it can't be accused of ignoring them, and the film threads its needle well, climaxing in a scene of animalistic madness even as it ultimately ends with a hopeful new beginning.

(Of course, as with Destination Moon before it, When Worlds Collide supposes that it's capitalism that shall be our savior; but at least this time, it ribbons its pro-business sentiment with slightly more nuance, in its recognition that not every rich person is an infinitely kind paternalist with nothing but the best intentions of humanity in his heart.  I know, I know!  It's a dangerously radical notion that Pal and Boehm are playing with here.) 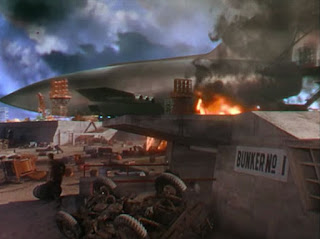 Might as well paint a hammer and sickle on that rocket.

Its best quality is that it leaves room for its characters to still be good—the romantic triangle between David, Joyce, and Tony is handled with such maturity that it probably counts as a genuine twist, and the final decisions about who lives and who stays behind might not be very surprising, but they're certainly satisfying.  You can't really ask anything more from any disaster flick.

In the end, you will realize that there's a better version of When Worlds Collide that could have been made: a more rigorous film, that tackles all its moral issues head on, and applies some better science to them, too.  (And more special effects!)  But it's a fun ride all the same—and it's every inch as serious as it needs to be, to get where it's going.

That which is indistinguishable from magic:
The morality of the past, in the future!: 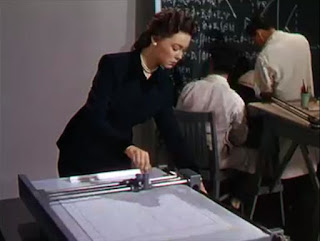 This is not 1951-approved material!
Sensawunda:
Posted by Hunter Allen at 6:01 PM