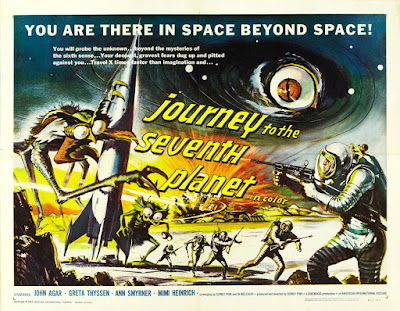 JOURNEY TO THE SEVENTH PLANET 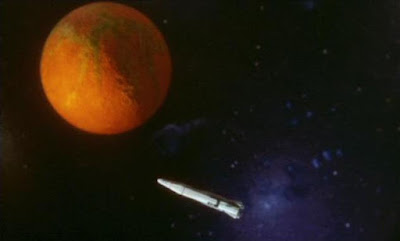 All in all, the 1960s were a pretty terrible decade for American movies—your only two bad choices are decadent, degraded Old Hollywood product, on one hand, and messy New Hollywood gnarliness, on the other, with few real standouts on either side and almost all of them bearing the names of Stanley Kubrick, John Frankenheimer, or Sidney Lumet.  However, if the 1960s were bad all around, they were especially bad for science fiction, with few films of note in comparison to the gleaming Golden Age of the 1950s—and fewer still if you don't count the genre-rescuing combo of 2001: A Space Odyssey and Planet of the Apes, each released in 1968.  Now, there were obviously still good movies here and there—there always are—but the 60s saw the genre getting badly hollowed out.  If you can characterize the 50s as the decade where cinematic science fiction first truly flowered, providing a huge dose of quaint thrills and goofy chills across the full budgetary spectrum, then the 60s were the decade where that flower began to wither.  After 1960, you'll find two kinds of sci-fi flicks predominating: first, the higher-end pictures from established studios who were actually willing to put some money into their color spectacles; and, second, the much larger group of measly programmers slapped together by independent filmmakers who hoped that their low budgets would translate into healthy profits, and who did their level best to drive the genre into complete disrepute.

And did I mention "color"?  Because that's where the problems really start hitting you in the face.  The 1960s were also the era when black-and-white photography stopped being the default choice, and started to become a thing that filmmakers only used in a deliberate way, as a deliberate artistic statement.  Naturally, all but the lowest-budget producers followed suit.  Therein lies a big problem, because even the shittiest 1950s B+W sci-fi film could manage a certain handsomeness, by way of the form's monochromatic remove.  (Okay, maybe not the shittiest 1950s B+W production.  Yet you'll find that even Ed Wood movies tend to benefit from B+W's flattening of detail—and that's a good thing, when there was hardly any detail there in the first place.)  The 1960s also saw a turn away from Atomic Age parables into Space Age adventures—a difference of emphasis more than anything, but an emphasis that demanded the creation of far-out vistas of other worlds, as opposed to an eerie shot or two of the Californian desert with a giant spider rampaging in the double-exposed background.  And while this shift largely benefited the marquee features, it tended to highlight every deficiency that a shoestring production could possibly have.

Well, as you no doubt guessed two paragraphs ago, this sour spot is precisely where we find director Sid Pink's 1962 effort, Journey to the Seventh Planet, an obscenely ugly piece of garbage from Denmark that references Alice in Wonderland, glancingly rips off both Ray Bradbury and Forbidden Planet, and prefigures a zillion "reality is what you make of it" narratives to come, from Star Trek's "Shore Leave" to Solaris to The Matrix itself.  Pink's movie, we discover, was put together with the lowest conceivable level of skill from every single collaborator, and stars a John Agar whose smug grin doubtless represents the level of sheer contempt he has for everything and everyone around him.

Surprisingly, Pink was a filmmaker with a history in the genre—he'd kickstarted the 3D craze with Bwana Devil in 1953, and in 1959 he produced The Angry Red Planet, the first film to showcase his CineMagic "color" technique—but Seventh Planet suggests more the flailing of a neophyte than it ever does a man who'd spent a decade making pictures.  In the end, it does look slightly ritzier than any given Ed Wood production—but as a piece of cinema it's honestly hard to say it's superior, and frankly it's even less enjoyable in its ineptitude. 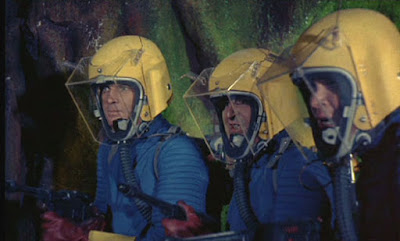 Seventh Planet opens with a de rigeur bored narrator who explains that, by the year 2001, the United Nations will have become the only governing body on Earth.  As a result, humanity has spread out across the solar system.  Presently, then, we catch up with a rocket on its way to Uranus, crewed by five explorers on a mission to determine if the cold outer world might support life.  (And, naturally, because Uranus has an intrinsically humorous name, you'll find this cast of Danes, Jutes, and savage Agars bending their tongues backwards to avoid the standard, amusing pronunciation.  This is how they arrive at their own deeply idiosyncratic version of the seventh planet's name: "ur-AHN-us," pronounced like a New Englander saying "Your aunt is."  It sounds as forced and idiotic as you would expect.)

Upon arriving at the gas giant—and they land right there, on the surface of Uranus, in case you were still taking this movie remotely seriously—they discover that it does have life indeed, for they've actually set down in the middle of an idyllic forest.  Yet this forest is quickly revealed as a forgery—the plants have no roots, and the entire area is sectioned-off by a force field, which keeps the air and the heat in, but is permeable, as one of their number discovers to his shock and horror when he foolishly reaches through and freezes his arm on the frigid Uranian atmosphere outside.

Of course, we're miles ahead of our astronaut heroes, thanks to that interstitial scene where time froze for several days, and our villainous alien overfiend narrated its plan in what amounts to a direct address to the audience, its dialogue track laid over some nominally-trippy optical gobbyldegook.  This creature, apparently the sole inhabitant of Uranus, desires a warmer abode, and to this end, it plans to possess one of the crew members, hitching a ride back to Earth.  And once on Earth, it reasons, its prodigious mental powers shall permit it to rule over our whole world.

The whole rest of the film is an exercise in the alien failing to make even the smallest concrete steps toward actually accomplishing this goal.  Instead, it conjures illusions—albeit illusions that must have some basis in physical reality, considering that the astronauts don't asphyxiate—which are drawn from the crew's greatest fears, as well as their greatest desires.  In practice, what this means is a fight with a stop-motion animated cyclopean rat monster, and an unending parade of hot women, whom our astronauts find wandering around Pink's terrible, terrible sets, each of them somehow managing to seduce these highly-disciplined travelers of the stars, despite their inexplicable origins and patently sinister intentions.  Perhaps they were snared by the women's highly advanced push-up bra technology.

Oh, but let us talk about those sets: I am unsure if I've ever seen less-convincing, less-artful sets in a motion picture, including Dogville.  (The lesson, I think, is that Danes hate production design.)  These would scarcely pass muster for a high school play.  We can begin with the ludicrous command center of their spacecraft, at once underdetailed and possessed of grace notes that make it even stupider than it already was, like the TV set in the middle of it, with its garish color gradient screen saver, serving no apparent purpose.  This set is so ramshackle that, at one point, Pink turns to stock footage in order to effect a shot of a switch being flipped.

In any event, this is also the best set in the film.  The rest are unbearably tiny, claustrophobic soundstages—when it comes to the sub-Star Trek cave set, the feeling of awful smallness is almost forgivable, but the other two major sets could scarcely manage to be less fake.  There is the forest the alien being has created for them, which is quite clearly about half the size of my living room; and then there is the Uranian wilderness through which the astronauts must travel to confront their captor, which is about two-thirds the size of my living room, yet even more stagebound, thanks to the outcroppings of ammonia ice that slice the frame to ribbons.  Meanwhile, thanks to the depressing decision to do Seventh Planet in color, it winds up even uglier than it already ought to be.  It is infinitely gaudy without being vivid, extremely muddy and incredibly unpleasant to look at.  And that's the whole movie: leaving aside a (stop-motion) establishing shot of the Uranian ice becoming a grove of trees, there is not so much as a matte painting to impress upon you the reality of these astronauts' adventures—let alone any kind of vastness that might convince you to drop your defenses and imagine that this impoverished basement is actually another world.

And... it gets worse.  With the tininess of the sets comes Pink's aberrant cinematic style.  The complete inability to construct any kind of flow to the action in the editing room we can perhaps overlook as an artifact of his miserable budget; but the man can't even put together a proper fucking conversation.  Sure, it's easy to pick on the 50s' studio B-movies for lacking in cinematic flair—but when you watch something like this, you realize how actually competent they always were, with images that correctly fit together, and dialogue sequences that may have relied too heavily upon two-shots, but which at least weren't stuck with such a noticeably static camera, nor so replete with such monstrously unmotivated zooms, or such tinny sound recording, or (when that just didn't cut it) Seventh Planet's teeth-grindingly obvious, "Watch out for snakes!"-level ADR.  (Probably a necessity thanks to the mostly-Danish cast, this movie is still not a bit better for it.)  It's about as poorly-made as a movie could ever get and still maintain basic cohesion; it's also about as poorly-made as a movie can get without lapsing into unintentional humor.  Thus we have the worst of all possible worlds. 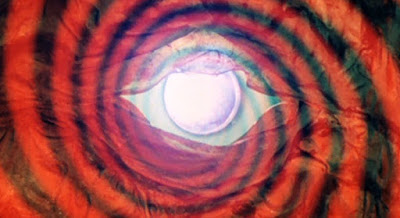 Pictured: the first of two noticeably-different, mutually-exclusive puppets used to stand in for the Uranian menace.

Please don't expect respite in the film's "acting," either: Seventh Planet is monotone and emotionally inert, in spite of the premise (which, after all, demands some kind of reaction beyond the affectless "sadness" that accrues to the commander's stultifying romance with a simulacrum of the village girl he once loved).  Even the sole exception to the cast's abiding woodenness—our man Agar—still doesn't bring any recognizable humanity to the proceedings.  No, he elects to play his character as self-parody, which is to say, his character as written, ultimately nothing but a collection of leers and naughty jokes and Before Times crassness.  Yet if it's never once funny, or interesting, at least it is something—and "something" isn't anything you're ever going to get from any of the other performers here.

No, if Seventh Planet is worth remembering for any reason (and God knows the ultra-generic boredom of its story shall slip from my memory within the hour), it would probably be the film's willingness to get psychedelic: namely its alien cave brain, represented with all the cheapo oddball optical effects that Pink could dream up.  These are initially a little fascinating, even as lo-fi as they are; but they rapidly become tiresome (and, of course, they're as dully ugly as everything else in the film).  Altogether, this 87 minute movie feels like two full hours, and I simply can't recommend against it strongly enough.

That which is indistinguishable from magic:
The morality of the past, in the future!:
Sensawunda:
Posted by Hunter Allen at 5:16 AM