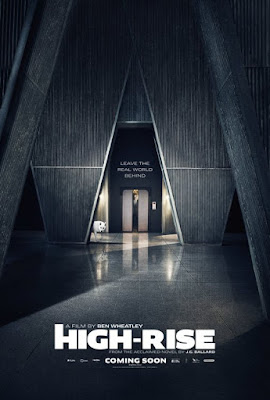 Arty to a fault, High-Rise is a largely pointless fable of the collapse of a society that hasn't existed in forty years, and although it manages to get a few palpable hits in (and some swell images), even the film's prospect of traveling back to a world that didn't destroy itself (but might've) doesn't pay off in any really serious way.


It's entirely possibly that High-Rise is much better as a companion piece to the J.G. Ballard novel that it adapts than it is as an actual film, in and of itself.  That would be one's hope, anyway, given that it is not a good film, in and of itself; and its sins would seem to at least partly arise from the process of adaptation.  Either too long or too short, it spins up a fascinating scenario (albeit a particularly effortfully fantastical one) in a relatively dynamite first hour, and there would be nothing but improvement if either another twenty or thirty minutes of connective tissue were added—in lieu of its aggressive, frankly pathological commitment to montaging every last scene—or if the film's mind-numbing repetition of nominally "shocking" imagery in its back hour were sliced down to nothing but the hits—so that even if the movie still failed to hang together as a story or even as much of a parable, at least it would serve as a worthwhile monument to director-and-editor Ben Wheatley's restless, relentless sense of style.

So what we have here is something that ought to have been significantly better than it is, or at least more interesting.  Wheatley (along with his screenwriter, and equally spastic co-editor, the fittingly-named Amy Jump) avoid the usual path of updating works of speculative fiction for the present.  Instead, High-Rise is set in the day-after-tomorrow milieu of its publication.  And thus are we witnesses to the revival of a particularly nightmarish version of the 1970s, with rampant (and I mean rampant) misogyny, and relationships between men that feel like the jungle is about to burst back into full bloom around them.  As for our story (such as it is), that concerns a certain new high-rise development on the outskirts of London.  It is a gorgeous piece of Brutalist design, curving like a finger across the sky, and featuring stark, spartan spaces for habitation, with exposed concrete support struts and unpainted walls.  Furthermore, all the necessary amenities for life have been built into the tower, like a pool, a gym, and even schools and a general store; and of course the facilities are all state-of-the-art.

We'll learn that buying a home in the high-rise also comes with an unlimited supply of cigarettes.  What a value!

We meet our young doctor protagonist, Robert Laing, as he moves into this would-be high-tech wonderland, and Laing settles impassively into his new modern life.  He even makes the acquaintance of its architect and owner, Anthony Royal ("a modernist by trade," he says, tellingly), who has made his abode in the ridiculously luxurious penthouse suite of his own building, where his unruly wife Ann rides horses and holds an endless array of fancy parties for members of their own social caste.

So this movie is just stupid British, in case you hadn't already figured that out from the cast list.

The architecture begins to reveal its own problems, in the form of blackouts and other service outages.  Class rivalries naturally come to the fore, and the development rapidly begins to unravel.  Richard Wilder thus becomes the kind of revolutionary id that you would really prefer not to represent your movement; and Royal and his cronies become increasingly detached and decadent and tyrannical, despite the fact that they're living and fighting and fucking in their own trash, just like everyone else.

Eventually, pure anarchy reigns—and the form sure as hell follows function, I assure you—but Laing maintains his mostly calm, mostly affectless demeanor (except when someone tries to take the particular can of paint that he needs to finish decorating his apartment), and this leads him to becoming something like the opposite of any mediator between the head and the hands.

Now, Metropolis surely isn't the only movie you'll be reminded of, were you to watch High-Rise.  There's also, of course, David Cronenberg's Shivers, which is virtually the same movie, but better, despite its cast of atrocious non-actors, partly because it has a more solid (science fictional) premise, and partly because it has a story that you can follow.  (Shivers, which was released the same year that Ballard's High-Rise was published, apparently represents a sort of convergent evolution on the subject of self-contained high-rise communities.)  The other movie, I'm afraid, is Zardoz, which is pretty clearly in the same tradition of wacked-out imagery barely tethered to any kind of palatable narrative, and which also wallows in 70s-style shenanigans, by which I mean both films' conflation of debauched sexuality with transgressive frisson (as opposed to what it actually evokes, which is tedium).  But, of course, I also mean the notion that women exist primarily to either participate in motiveless orgies or get raped.  Well, it does capture the era.  I'll give it that.

But there's a giddy weirdness to High-Rise that carries it about halfway through, and it's notable that while there's an unpleasant looseness to the editing even here—and not just because it begins at the ending, then resets to three months earlier—the film manages to set up its story and characters with basic competence, while also presenting some pretty fabulous images of that old boogeyman, modernity.

(Let's hold on for just a moment here: I think it's important that I be willing to concede that I am so absolutely baffled by the reaction to modernity and "technological living" that I may simply be constitutionally unable to "get" whatever it is High-Rise is going for.  To me, the titular condominium is just one more kind of fucking house—indeed, in this case, a particularly aesthetically-pleasing house.  And, goodness, if movies have taught me anything, it's that there's not any kind of house that fails to dehumanize the people that live inside it: rural houses; Gothic mansions; Art Deco penthouses; squalid big city apartments; and every damned kind of fucking suburban home you can name, from the Technicolor tract houses of All That Heaven Allows to the stultifying black-and-white ones of Pleasantville.  (Please, let's not even get started on Poltergeist.)  Perhaps the upshot is that "humanity" doesn't mean anything close to what we want it to mean.  But if there's anything in this particular movie that I found at all grokkable, I suppose it might be that humans are so poorly-adapted to living in large communities that those communities will eventually collapse—but honestly it seems a lot more like the film is asserting humans of the modern era are so pampered and alienated from one another, that if their machines ever break, they'll simply all sodomize each other, then die.)

You know, I hope we don't ever run out of oil.

Anyway: the characters, being essentially extraterrestrials—they're not even well-drawn enough to be metaphors, really—do retain a great deal of power to amuse, at least for a while.  And Wheatley's direction keeps High-Rise feeling fresh for a little while longer, even then.  But somewhere after the hour mark, things go badly wrong.  The plot becomes increasingly redundant, even circular, and that plot is annoyingly related either through montages, or through the film's huge number of elliptical cross-cut sequences that tend to demonstrate no internal relationship whatsoever (not thematic, not aesthetic, and sometimes it seems like there's not even any temporal identity between the two or three things that appear to happening all at once).  So, despite the all-caps "THREE MONTHS EARLIER" that begins the movie proper, and the theoretical time-keeping device of Helen Wilder's already-late pregnancy, chronology becomes an awful slurry in High-Rise.  This may even be the point; but it's no fun when events become a muddle.  You wind up spending more energy keeping track of the film's incident than you'd ever prefer, especially when it turns out most of the incident doesn't even really matter very much.  It becomes, in a word, boring, and Wheatley goes back to his very driest well—all his allegedly ribald sexual antics—so many times, that you begin to wonder if you're actually watching the world's most reluctant porno.  (Meanwhile, the film makes a great many promises about its content that it simply doesn't keep—face-peeling and horse-fucking being chief among them.  No, High-Rise does not even really have the courage of its own psychotic libertinism.  If you're going to spend so much time wallowing in the full filth of humanity, then really go for it, Wheatley—and don't dare show me twenty aggregate minutes of extras poorly simulating sex in the background, and then try to tell me you're supposed to be in the avant garde.)

I should mention that the performances, at least, are all rather good—at least for a certain value of good, wherein the actors, playing characters who may as well have come down with a contagious form of Tourette's, do still manage to scream out their various non sequiturs with at least a minimum of dignity and panache.  I'll spare a word for Tom Hiddleston: the man is never not a delight, but he certainly comes closer here to not being delightful than he ever has before.  Oh, yes: he struggles with Laing.  But of course he does.  Who wouldn't?  Laing is a mess of contradictions, taking vengeance one minute, holing up in his apartment the next, and shrugging his shoulders at grave crimes against a friend the time after that.  There is no psychology in this movie, after all, only extremely vague posing.

But I didn't hate it, partly because it's got some pretty gorgeous cinematography by Laurie Rose and some excellent production design by Mark Tildesley (this marks the third time I've seen a movie where Tildesley's design was the single best thing about it, the other two being the In the Heart of the Sea and Sunshine).  Even in its disastrous longeurs, it still manages the occasional strangeness in its mise-en-scene, in its performances, or in its script, that at least keeps a viewer on their toes.  ("Now he's going around, raping the wrong people!" being a particular winner of a line.)  Thank God for small favors, I guess.

And, yeah, Margaret Thatcher does suck, High-Rise.  So what?