Cardboard Science: "What are these Martians?" "What are we?" I answered, clearing my throat 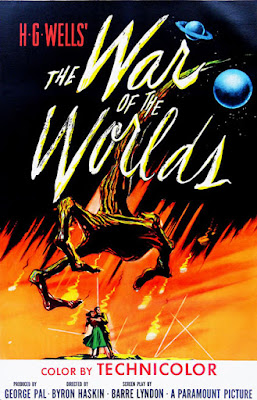 THE WAR OF THE WORLDS

One of the great science fiction novels becomes one of the most important science fiction movies—and so much is lost in the translation that what you actually wind up with is a very influential, yet (ironically) mostly sterile, genre experience.  So it goes.

Spoiler alert: they die from germs 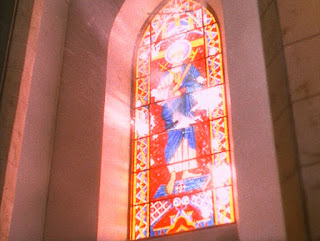 It's a little bit astonishing that the exchange of dialogue above—the one that supplies the title for this review—never quite managed to get itself uttered in either one of the two major Hollywood adaptations of H.G. Wells' famous 1897 novel, The War of the Worlds.  At least I find it astonishing, because that quote sums up, in one pithy exchange, what I conceive to be the entire point that Wells was making when he wrote his book.  But maybe I shouldn't, since no one, to my knowledge, has ever really made a faithful adaptation of Wells' quick-sit parable.  The 2005 version—Steven Spielberg's—is, I suppose, somewhat closer to the spirit of the thing.  But, then, George Pal's 1953 production of The War of the Worlds doesn't even really try—except, that is, to the minimal extent that the movie is likewise about a Martian invasion.  But no: it only makes one desultory attempt to capture anything of the novel's mood, in one brief sequence toward its ending.  (Not remotely coincidentally, this is also the most effective sequence in the film.)


This less-toothsome iteration of TWotW was adapted by Barre Lyndon (which will always make me chuckle, because I'm a nerd); it was directed by Byron Haskin, who would become Pal's most trusted helmsman.  Haskin would go on to direct four more films with Pal, and we shall attend to those films in their course.

For now, however, we attend strictly to TWotW, and the biggest way you can tell that this movie, whoever actually directed it, is more Pal's than anybody else's, is that it shares with his early sci-fi works that essential feature of being more concerned with procedure than anything else whatsoever.  It set the tone for the whole decade; but if you'd like to see this "Pal Touch" applied to rather more suitable SF tales, you need look no further than Destination Moon or When Worlds Collide.

Thus the greatest change that Lyndon's script wreaks upon Wells' novel is to turn Wells' protagonist from a vaguely useless (and self-satirical) upper-crust philosopher into a hard-nosed, general-purpose 1950s science-hero.  The smaller changes are mostly window dressing—like the obvious relocation of the center of the initial action from Woking, England, to Linda Rosa, California, or the updating of human military technology, notably the desperate deployment of a nuclear bomb.  But every big change in Pal's TWotW flows directly from that more fundamental shift in the story's narrative and perspective.

So amongst those bigger changes, we must count the film's rather top-down view of the Martian War, something the novel only occasionally provides, and then solely in the sense that it purports to be the memoir of a survivor; we must add also the addition of a love interest/screaming female, which is extremely annoying given that the novel's protagonist is a married man, who spends much of his time worrying about whether his wife has been vaporized; and, most importantly of all, the cinematic TWotW features a near-complete absence of any extended sequence where our man, Dr. Clayton Forrester (which also always makes me chuckle), must face the end of his world alone.  It's like Lyndon wrote his script based on someone else's second-hand recitation of the premise—while if any of the plot accidentally seeped its way into that description, Lyndon dutifully cut that out.

Nevertheless, I'm surely safe in assuming that you are already quite well aware of this particular premise.  (And everyone in 1953 would have been up to speed, too, thanks to Orson Welles' infamous radio production, then only fifteen years in the past.)  Still, in terms of Pal's film, what occurs is this: a meteor lands in southern California, bearing ill-portent.  By the time Dr. Forrester has been enlisted to take a look, all the local yokels have shown up to take their poke at it, too.  They mostly manage only to get in the scientist's way; however, in the case of the town pastor's niece, Sylvia van Buren, he doesn't completely mind.  The film innovates the magnetic pulse that knocks out electrical equipment and renders watches inoperable; but the part where the Martian tripods emerge from the hollow meteor to do battle is indeed largely the same as it is in the book—except for the obvious fact that (partly owing to production realities, partly owing to the aesthetic current of the day) the Martian war machines aren't tripods anymore: 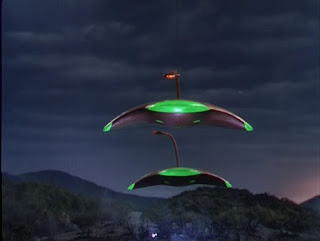 We in the audience already know that these invaders are Martians, of course, because the Narrator has told us so.  The film actually opens with a long, loving, and rather charming look at our solar system.  Incorporating some of Wells' prose, Sir Cederic Hardwicke carefully and semi-accurately explains to us why the other planets are unsuitable for the Martians' imperial impulse—whereas Earth is just right. 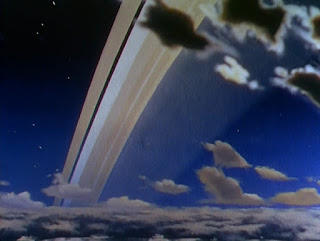 But man, I love it when movies have extended sequences with astronomical paintings.  (That's normal, right?)

Naturally, the Martians mean to exterminate us.  And, technically, this is yet another departure from the source material, and although it practically guts the novel, I can accept this change as more-or-less completely unavoidable.

Dedicated to killing humans, then, the Martians go about doing exactly that for about one hour of screentime, exposing Dr. Forrester and Sylvia to a great deal of (nominal) danger as the U.S. Army and Sylvia's uncle are obliterated by way of double-exposure photography, alongside thematic and visual redundance.  Eventually, Los Angeles itself is threatened.  Meanwhile, we hear tell of Martian incursions all across the globe—and soon it seems that America may be the very last bastion of organized human resistance on Earth.  Incidentally, that nuke?  It does not work; the Martians, ensconced within their force fields (have I mentioned this isn't like the book at all?) are totally invulnerable to human agency.

Differences aside, Pal's TWotW is, in its own (and frankly less-interesting) way, nearly as seminal as the book upon which it is based.  Principally, both are indeed vehicles for visceral action—apocalyptic fantasies couched in scientific language, made at once more plausible, and more fanciful, upon that account.  Just as Wells' novel was the first alien invasion story, Pal's film was the first major motion picture that possessed the gumption to try to realize a thoroughgoing vision of brutal alien warfare.  It remains, in that respect, a highly important motion picture.

The thing is: it's not half as good as the book, for it is concerned entirely with its surface elements, and positively none of its substance—there's hardly a stray line that manages to evoke the book's dethronement of humankind in its great Darwinian struggle against the Martians.  And perhaps it goes entirely without saying that the film abandons every last bit of the political subtext of a book that was, you recall, about Victorian-era Britain getting wrecked by a vicious colonizing force. 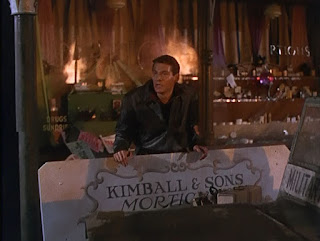 And by "subtext," I mean that Wells explicitly points out that Britain's wars of extermination are exactly the same as the Martians' attack on humanity.  He does so on the second page of the first chapter.

Most curiously of all—although perhaps this befits a film made in the very midst of mid-century American optimism—Pal's TWotW abandons the idea that progress, whether it be technological or evolutionary, has no moral dimension at all.  Wells' Martians, a million years in advance of us both mechanically and biologically, are literal vampire-parasites; but Pal's Martians, weird-looking and possessed of great weapons, are merely xenophobia made metal and flesh.  (Hell, they're not necessarily even commies.  Now, I imagine that one shouldn't overlook that they come from the Red Planet; but how Pal and Lyndon and Haskin managed to skip over the Red Weed is completely beyond my capacity to grasp.  Gracious, the Red Weed serves as such a wonderfully blunt metaphor for the spread of socialism that Wells—the socialist—would no doubt have consciously avoided inventing it in the first place, if only he'd written his book thirty years down the line!)

Anyway, this review has listed dangerously close to simply being an expansion upon the sentiment, "It's not as meaningful as the novel, and therefore not as worthwhile."  And while this is extremely true, the other side of that coin is that Pal's TWotW is not even great at being what it wants to be, which is raw Technicolor spectacle.  Though Pal got Paramount to throw two million dollars into the film's production, it only fitfully manages to get across the immense scope of the Martian War's destruction, which is ratcheted up quite considerably from the novel—if mainly only in dialogue. 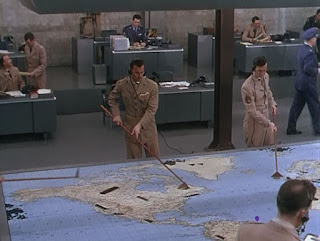 Indeed, TWotW does very few things that its direct lineal descendant, 1956's Earth vs. The Flying Saucers, doesn't do significantly better (including all those Pallian procedural elements, which anyone with even the faintest familiarity with Wells' book knows damned well will not fucking matter in the end).  It's unfair to compare a film to its successors, but that's the cross old movies have to bear, and often they are simply superseded.

But let us not convey the impression that TWotW doesn't do anything well: the design of the saucers is iconic for a reason, and though that reason isn't necessarily specifically visual, their clean curvilinearity and the articulated arms of their heat-rays are immensely attractive to watch float across the frame; the design of the Martians themselves is suitably gross, and reasonably faithful to the book; above all, the sound design is just psychotically good, and TWotW offers perhaps the most memorable death-rays in cinema.  The report of the Martians' primary weapon is shrill yet not painful—and it's legitimately mildly terrifying, in a really impressive way. 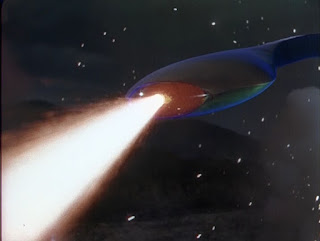 I've found three separate (and mutually exclusive) origin stories for this sound effect, which has been used and re-used a thousand times since 1953.  But however it was created, William M. Andrews et al deserve the kind of credit we normally reserve for legends like Ben Burtt.

That farmhouse sequence with the roving Martian eye, famous as it is, is scarier for a 1950s kid than a 2010s adult.  Yet I must admit I remember it giving me nightmares years ago, so it must have been doing something right.

But the finale, as I've said, is solid through-and-through—it throws Dr. Forrester into the midst of the human anarchy that has consumed Los Angeles as he attempts to find Sylvia (whom the script has finally deigned to separate from our hero).  It climaxes in a church, where the only option left is prayer—and those prayers are, of course, answered, by the humblest thing that God, in His wisdom, has put upon this Earth.  I should perhaps mention that I've never been especially fond of the ending of any version of TWotW, even Wells', although Wells at least did have the excuse of writing in the 19th century: it is, of course, beyond all credibility to believe that any race that has mastered spaceflight has not also mastered antibiotics.  But it's a poetic ending, isn't it?  And thus for the first time in a little over 90 minutes, Pal's TWotW—one of the biggest films in its subgenre—manages to get so much as within spitting distance of its far-more distinguished literary forebear.

That which is indistinguishable from magic:
The morality of the past, in the future!:
Sensawunda:
Posted by Hunter Allen at 4:21 PM