Cardboard Science: The wheel in the sky keeps on turning 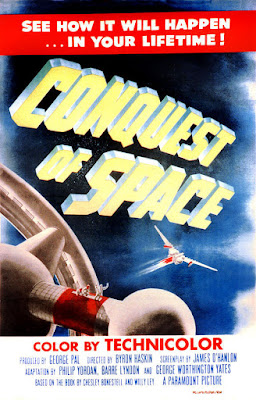 George Pal returns to outer space, but we don't much like what he brings back. 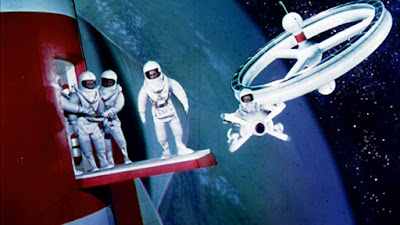 Frankly, George Pal's 1955 production of Conquest of Space bums me out.  Consider my expectations: it was well-financed by Paramount to the tune of about one million dollars, and the money they gave Pal and his special effects men was spent as ambitiously as you could imagine; it represents a third chapter in Pal's unofficial spaceflight trilogy, following hard upon the notable success of both When Worlds Collide and especially the film that started it all, Destination Moon; and, finally, it offers a nice, hard premise upon which a truly interesting story—or at least an inoffensive one—might easily have been built.

Unfortunately, instead of doing that last thing, it just vomits its concepts and its plot points directly into your lap, and calls it a day.  It certainly must have bummed out contemporary audiences, too, since it flopped badly.  But I have no trouble imagining that the man it bummed out more than anyone was poor old George Pal himself, for it led to the end of Pal's relationship with Paramount, and for many, many years, it spelled the end of his collaborations with his director, Byron Haskin.  Indeed, his reputation in Hollywood wound up severely damaged by Conquest's failure, and his planned sequel to When Worlds Collide, After Worlds Collide, went up in smoke entirely in the aftermath.  To this day, there's no cinematic adaptation of the second book in that cycle.  And so, Pal went back to the U.K.  (Britain had been his home for several years, during his headlong flight from the European fascists, though I don't necessarily mean to equate these two events.)  Anyway, it was in Britain (albeit in partnership with MGM) that he'd make his feature directorial debut, a musical about a tiny magical man; and, upon returning from Britain to California with a second H.G. Wells novel in tow, he would produce (and direct) what might well be his masterpiece, an adaptation of The Time Machine.  But that is five years hence, and today we're talking about this movie.  Even if we'd rather not.

Conquest is based, faintly, upon the prose of the speculative writer Willy Ley and the paintings of astronomical illustrator Chesley Bonestell; the film takes its title from their 1949 pseudo-fiction collaboration (though it drops the definite article), and it utilizes several of Bonestell's designs, above all the Wheel.

And the Wheel is where we begin.  It is a great international space station, a torus spinning in orbit high above the Earth, generating its own artificial gravity by way of centripetal force.  (No mention is made of a Lagrange point, but cut them some slack—this is years before The High Frontier really laid all this shit out in easy-to-understand terms.)  The Wheel is home to its commander, Col. Samuel Merritt, and his executive officer (and son), Capt. Barney Merritt.  And it is home also to the construction workers who are building the nearby Spaceship, as well as the Spaceship's prospective crew. 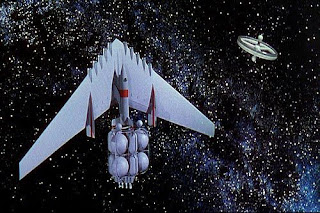 You'll notice that I'm capitalizing "the Spaceship," for this spaceship's proper name is, in fact, "the Spaceship."  And I presume that goes to show just exactly how much imagination went into this particular fucking spaceship movie.

Barney, recently married, has been aboard the Wheel for a year now.  Naturally, he's anxious to return home; however, his father imperiously denies his request for leave.  But when the new orders come down, and it turns out that the Spaceship they're building is going to go to Mars, instead of merely the moon (as everyone believed), the elder Merritt finds himself constrained by his duty to obey; likewise, the younger Merritt finds himself constrained by filial obligation to accompany his dad.  Meanwhile, we visit with the Spaceship's crew, a cross-section of ethnic stereotypes, dominated by that one asshole with the really, really annoying Brooklyn accent.  (He's named Seigel, so obviously Phil Foster plays his character as broadly Italian, and by "broadly" I mean "he slathers marinara sauce on the scenery before he consumes it.")  And we meet the crew's keeper, too, a non-commissioned officer named Mahoney.  He's an old acquaintance to the Colonel, and he could only be more Irish if, in addition to his terrible accent and his awful peat-of-the-bog manner, he were also constantly stinking drunk.  Unfortunately, one of the crewmen we meet is washed out of the program before the orders to launch even arrive, when he freezes during a construction accident; and this is what writers call foreshadowing, since Conquest of Space is about the pressures and tensions of living in a metal bubble surrounded on every side by the unforgiving vastness of space.

Rounding out the five-man crew of the Spaceship, however, are Roy Cooper, a medical fellow; Andre Fodor, a Russian without any distinguishing characteristics and whom we therefore suspect shall horribly die; and Imoto, a geochemist.  Imoto, of course, is Japanese, and the script takes advantage of Imoto's particular nationality in a very curious way, when the screenwriting team puts into his mouth an oblique monologue about World War II, ribboned with some far blunter material, concerning the phenotypical and cultural development of the Japanese people in the absence of easily-extracted natural resources.

If it's probably the single most memorable part of the film, it's also the most easily-criticized, to the extent it's been attacked as kind of racist—which it is, somewhat, particularly in Imoto's assertions that East Asians are smaller-statured due to diet, and in his insinuation that chopsticks are the kind of inferior cutlery you get when you live on an island without metal.  But the basic thrust of Imoto's speech is the exactly kind of heady, philosophical discussion you want to hear in any movie about the conquest of outer space, a reflection upon humanity's past as it pertains to the future—in this case, the prospect that the bloody Resource Wars fought by Imperial Japan to obtain oil and iron and coal could be the future of all humanity, even Americans in our land of plenty, as we enter an age of scarcity.  It gives all this adventuring into the void a point; and it offers the film something it needs even more than a point—some halfway-compelling writing.

Well, the Spaceship blasts off towards Mars—and about 250 pounds heavier than it ought to be, thanks to Mahoney's decision to stow away in order to be closer to the elder Merritt, much as a loyal dog might have done.  This is where Conquest starts to go off the rails pretty badly, when the presence of a sixth crewman aboard a five-man spaceship—which has surely been designed and provisioned down to the ounce—fails to impact anything, or even draw a fucking comment.  It won't matter pretty soon enough, though, when Fodor eats it during a spacewalk interrupted by a debris storm.  Now, this would be the film's second most memorable scene, and it is, to Pal's and Haskin's credit, the kind of tense sequence of cosmic danger that would eventually find its fullest expression in Gravity, involving a piece of hyperfast space garbage pinging through Fodor's suit—and skull—like the man wasn't even there in the first place. 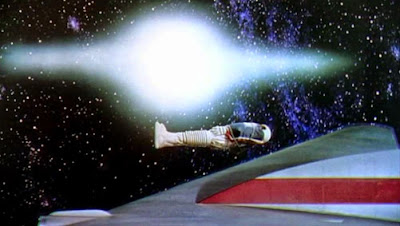 But this is what finally triggers the elder Merritt's full-on psychological breakdown—and it's been on its way ever since the beginning of the film, even if it still feels like it comes out nowhere when it finally arrives.  We have seen the coyest indications of some kind of drug addiction (!), and he's been reading the Bible an awful lot lately, which is never a good sign.  Now, the officer becomes convinced that their voyage to Mars is an outright blasphemy.  And upon their arrival on the Red Planet, he seeks to strand them there—which of course leads into a direct, and deadly, confrontation with his own son.

If you were to write a quick logline for Conquest, it would come off pretty enticing: it's one of the first stories about going stir-crazy in space; on top of that, it's got that patricidal angle, too, which could have been subtext in a movie about spacemen without a specific blood relationship, but still serves quite well enough as text.  The problem, of course, is that this 81 minute film was always going to have a very hard time developing the elder Merritt's insanity in any really plausible way; and when his madness hinges upon the spiritual difference between a trip to the moon and a mission to Mars, it's incredibly difficult to actually take him remotely seriously, even as a mentally ill man.  (Truly, how do you go from Merritt's eagerness to get to the moon, to a belief that God is angry at you for trying to go a little further, out to Mars?  One is also bound to question why a Korean War veteran is uniquely distressed by the accidental yet unavoidable death of one volunteer.)

It doesn't help that Mahoney, whom the film requires to be incredibly, obnoxiously stupid, takes the newly-minted General's side in things; but even then, nothing really comes out of any of this intrigue, except for one quick and necessary death, which leads into a stranded-on-an-inhospitable-planet climax that concludes in a far, far less interesting way than the same basic plot was already resolved once before in a George Pal movie, in good, old Destination Moon.  Basically, what we have here is a film free of characters (although absolutely replete with caricatures), and padded out with a little bit of religious mumbo-jumbo and a threadbare survival narrative.  It ultimately fumbles quite badly with its undercooked science vs. religion metaphor; and it is simply not enough. 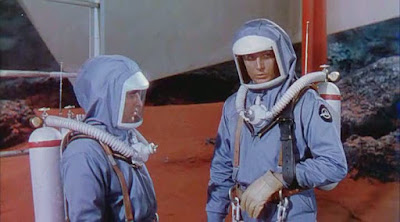 Though at least it's arguably better than Sunshine.

So, once we disengage with the story, as we are bound to do, Conquest's very selling point, its deployment of special effects in service of quasi-realistic spaceflight, comes off instead as a little campy—and extremely primitive.  I do not mean to say that it is bad—it is, for its day, extraordinarily good, albeit with a reach that far exceeds its grasp—and there are shots here and there that really do demonstrate a well-funded artistry, notably a process shot that sees two astronauts on the side of the Spaceship walking on two different planes in their magnetic boots. 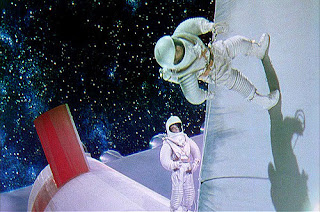 Nonetheless, the typical shot is kind of unpleasantly composited, neither believable nor especially enchanting.  And I don't know what they were thinking with the giant asteroid that presages the debris storm; its papier-mache construction is everything about mid-century sci-fi that people make fun of today.  Perhaps they guessed that audiences couldn't comprehend hypervelocity fragments of dust without priming that pump with a macrocosmic astral body first.

Conquest of Space failed for pretty good reasons, but we should, perhaps, lament its failure even as we accept that it was right and necessary: it spelled an end to realistic space travel movies made with flush studio budgets.  It wouldn't be until 2001: A Space Odyssey, in 1968, that this particular brand of hard sci-fi would make its real comeback; the next time humans went into space under their own power, it would be at faster-than-light speeds and in the far-flung science fantasy future of Forbidden Planet.  And while we might not trade Forbidden Planet for anything, I like to think there was a place in the studio system for more sober explorations of the stars, until Conquest shut the door on it. 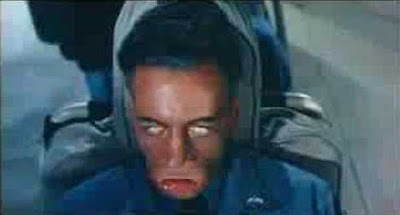 The morality of the past, in the future!:
Sensawunda:
Posted by Hunter Allen at 9:57 AM