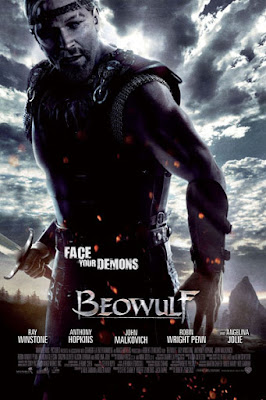 Not the abject artistic failure you might have expected, Beowulf at least suggests why Zemeckis kept at the mo-cap thing.

Beowulf opens well enough, with carousing, the drinking of mead, the drinking of mead off the breasts of a woman, urination into a giant pit, implied cunnilingus, a shot of Anthony Hopkins' naked and implausibly-smooth CGI buttocks, and—most edgily of all—a discussion of the merits of Christianity vis-a-vis Danish paganism.  In other words, Robert Zemeckis wants you to know, right off the bat and in no uncertain terms, that he has wrought an Animated Film for Adults.  And that's why, I suppose, that when the hero Beowulf grapples with the monster Grendel, he does so buck naked, but Zemeckis makes sure that his computer-controlled mise-en-scene always places a mist or a sword or a shadow over his giblets, because fighting monsters naked is badass and is exactly what you'd like to see a foolish hypermacho pagan warrior get up to, but—on the other hand—fighting monsters naked is also kind of gay, so we probably ought not be too confrontational with our audience.  Instead, let's turn this battle into a completely joke-free version of the famous scene from Austin Powers: International Man of Mystery, all whilst undermining the apparent point of this scene, on top of jarring you completely out of the film's tenuous illusion of reality by revealing the trembling hand of its director-god.

Well, I guess Zemeckis gets points for trying to do something weird and vaguely innovative with animation; but that's the epitaph you could carve onto the headstone of his whole motion capture experiment.  Still, I don't come to bury mo-cap today.  I come to very, very faintly praise it, and maybe even give poor Beowulf a backhanded compliment, since it is—and to my mind, rather unambiguously—the absolute best of the three mo-cap cartoons that Zemeckis directed between 2004 and 2009.

So let's talk Beowulf, which found Zemeckis working in collaboration with Sony Imageworks for the motion capture.  Tantalizingly, it was only the second R-rated animated feature to ever receive a wide release—

What?  Really?  This movie actually got a PG-13?  Even with all the impalements, all the cleavings in twain, and all the shots of Angelina Jolie's hilariously unanimated, statuelike tits, with their visible nipples and everything?  Damn, okay, fair enough.  And maybe this is an artifact of the unrated director's cut, which is the only version of the film I've ever seen.  Or maybe it's just that the animators were so into their imagined version of Jolie's barely-veiled nipples that they neglected to give her so much as an outline of a vagina, thereby rescuing their film's rating.  But, gosh, it seems like there'd be almost no fun at all to this movie if you took the cool hyperviolence out of it.

In any event, no matter the cut, Beowulf is an adaptation of the famous epic poem, which I imagine almost all of us only remember from ninth grade, when English teachers imposed its completely unintelligible text upon us in order to make the fairly self-evident point that English, like all languages, has not been around forever, and used to be very different.  I have never actually read the whole poem nor one of its translations (I would bet an Internet dollar that you haven't either, and moreover that you don't even know anyone who has).  I did try recently and I became very bored.  Therefore I have no stake in the debate over whether or not it was an awful crime against literature that Zemeckis and his writers (screenwriter Roger Avary working with comic book legend Neil Gaiman) wound up changing so much of the poem that it's only barely recognizable anymore as Beowulf, and mainly by its use of character names.  I will, rather hesitantly, venture to say it was a good thing: my understanding of the Beowulf narrative is that it is largely plotless and even, to some extent, characterless.  The movie, meanwhile, certainly has a plot; and it sort-of has characters; but, oddly, if it's an adaptation of any work of classic English literature, then it's really a deeply cryptic (yet recognizable) adaptation of Macbeth, punched up with some vague inspirations that come either from Oedipus the King, or the Arthur myths, or (most probably) merely the limitless wells of father-hatred, for which Hollywood screenwriters are so well-known.

The film begins much like the poem (I got through the first two or three hundred lines): the Danish chieftain Hrothgar, having built his new meadhouse, has taken to throwing enormous revels, and this infuriates the local monster, a wreck of a thing called Grendel.  It—rather, he—smashes the meadhouse, and murders many Danes, and his reign of terror goes on for years.  The curse of the land translates into a call to adventure for many heroes, and the latest man to take up the challenge is a certain Geat warrior by the name of Beowulf, who arrives with a small squad of soldiers, including his friend and advisor Wigraf, who contrasts Beowulf's youthful impulsive self-aggrandizement with age and what seems like wisdom.  Beowulf baits the monster Grendel, battles him in the aforementioned nude, and slays him, but, as everyone knows, the biggest monster isn't Grendel, it's Grendel's mother.  When she takes reprisal, Beowulf is obliged to venture into her lair.  And here the film departs rather radically from its source material.

We grok quickly that Grendel's father is none other than Hrothgar himself.  And, thus, it's not quite as counter-intuitive as it might otherwise be, when, instead of doing battle with her son's slayer, Grendel's mother strikes a deal with the hero instead.  It involves giving her a new son—wink wink, and it's a task made more palatable by the witch's shapeshifting powers and a seductive human form that bears a literally-uncanny resemblance to a famously hot actress.  So, with that deed done, Beowulf secures peace for the kingdom, drives the old king to suicide through somewhat unclear means, and becomes the new monarch of this medieval Danish shithole.  We flash forward twenty years, and Beowulf's child by Grendel's mother returns to claim his birthright, namely his father's death.

There are parts of Beowulf that don't make perfect sense (why Hrothgar jumps into the sea now, of all times, is not self-evident, although apparently his shame and guilt have caught up with him), and its characters are absolutely impervious to analysis, existing as they do almost solely as archetypes.  But these aren't necessarily bad things when you consider the film's context, given that Beowulf is (quite plainly) Gaiman and Avary's attempt to build, out of existing materials, a high-mythic tale of adventure and moral choices and thinly-veiled but self-critiquing misogyny.  On this level, it basically works: Beowulf is a braggart and a dick, and although he's a tremendous warrior—he's not talking completely out of his ass—he's as untrustworthy and self-serving and cruel as you'd expect any man who rose to become a king to be.  Beowulf takes its pagan ethos seriously; it does not go out of its way to judge its hero's amorality.  But when it is fundamentally about the psychology of the ambitious striver, and about the difference between a young man and an old one, it is not much of a surprise to us when its hero discovers that having all his dreams come true nonetheless failed to make him happy, especially when his dreams were built on lies and horrors.

Maybe it's even accurate.  Give me everything I want and I'll let you know.

The film's very last shots—Wigraf, silently considering Grendel's mother's newest offer, and ending the film with the impression that this cycle of greed and downfall might continue for all time—hammer home these themes, and if they represent the only time where they're perfectly communicated, it's still just about as strong a final note as you could reasonably hope for.  (And yet, for example, it is beyond obvious that Grendel's mother taking a more active role in Beowulf's ascent to the throne—or Beowulf having to do more to take power than make an old man kind of sad—would have been better for both this movie's story as well as for its message.)

Ultimately, though, you're left largely satisfied by Beowulf, even though everything that happens in it is mostly a foregone conclusion—at least it is once you understand what it's driving at—and it is only moderately decent as a cartoon actioner.  Indeed, the decision to do this film as a mo-cap animated feature is slightly baffling, and it makes no sense at all outside of Zemeckis' own obsession: it clearly intends to slot itself into what people were obviously hoping was going to be a post-LotR fantasy boom, but the film would almost certainly be better if it were a more traditional live-action/CGI hybrid, with some of the film's most overtly cartoonish gestures also being the ones where the movie most noticeably falters.  (I refer to some long tracking shots that call attention to themselves; and, of course, I refer to the actors' CGI skins.)

If nothing else, it's a big improvement on The Polar Express.  And, as is typical for mo-cap films, it looks way shittier in stills.

It doesn't exactly recommend itself: it sometimes grants their characters' an interesting layer of abstracted unreality, and sometimes it just makes you roll your eyes right out of your skull—like when the CGI artists reveal that they have no idea how physics interact with breasts, and that they really hate doing body hair of any kind.  (And Jolie's model, who is clearly wearing makeup, is pretty much terrible in every single way it could be.  But I suppose I like the idea of Jolie and Crispin Glover, as Grendel, reading their lines in Old English, even if, in the execution, the film seems almost afraid of showcasing it.)

But the character animation—to be more precise, I mean the character design—must hit its absolute nadir when the creators make it obvious that they have no idea how people age if they have two X chromosomes, which is why they felt comfortable using the model they did for Robin Wright's Queen Wealthow in the film's third act.  Allegedly twenty years older than she was when we first met her, she appears to have simply had one or two wrinkles added to her temples, and her hair palette-swapped to silver from gold.  I can't tell if this is sexist, or just lazy.

Yet, crucially, it does have its moments: the fantastic beasts are all rather enjoyable—Grendel's repulsive form is especially memorable—and a mid-film flashback to a swimming race, complete with sea monsters, is frankly kind of great.  I honestly love the spaghetti-sauce consistency of Beowulf's CGI blood.  It might be the best CGI blood ever, and it reminds me of Fiend Without a Face in a very good way.  Finally, although those sweeping, impossible landscape shots aren't necessarily the best thing for a viewer attempting to immerse themselves in Beowulf, the long takes that mo-cap makes feasible in the action sequences are actually pretty swell.  Even if I do wish Zemeckis had just let Beowulf keep his damned pants on (or even gone for a dangly, flaccid R), and avoided a lot of embarrassment for everyone.

The film is not any kind of classic.  But I've seen it twice, and somehow I've found myself enjoying it both times.  Perhaps it is sheer novelty alone that justifies it: whatever problems it has, there just aren't that many motion pictures like it, and the ones that are all involve Ralph Bakshi or Rankin-Bass.  I'll take this.