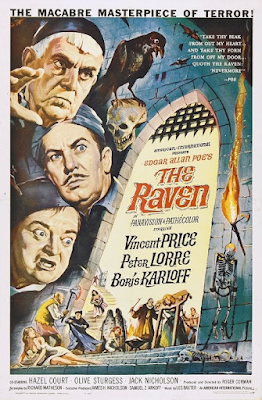 THE RAVEN
1963
Directed by Roger Corman
Written by Richard Matheson (with several lines taken from the poem by Edgar Allan Poe)
Spoilers: moderate

Matheson considered the instruction to do a movie based on "The Raven" to be such a joke that there was no other option but to respond in kind; and aware that his audience had hailed "The Black Cat" as Tales of Terror's best sequence, and aware, also, of the potential of Price & Lorre as a comic duo, Corman agreed that the best approach was a horror-comedy.  I suppose they got halfway there.  The horror, anyway, is completely tamped down in favor of what they were obviously really going for, which is full-tilt kid's fantasy; it's "a horror movie" mainly by tradition, sure, but it's a "horror movie" where the body count is, effectively, negative one.  It's barely even "spooky," and if it is, it's thanks to production designer Daniel Haller's sickly trees and his most elaborate castle set so far, alongside cinematographer Floyd Crosby's deployment of more dancing firelight and slightly less approximating electric light than usual, thanks to Scarabus's rad flame fountains.  Actual scariness is contained almost solely within the otherwise-comic sequence of Craven and Bedlo raiding Craven's father's tomb, whereupon the mummified corpse springs to life to offer a prophetic warning; and it's possible this is only impressed upon my mind because the imagery gets an unexpectedly severe reprise later.
Yet my plot summary probably sounds like Corman and Matheson took their self-defined mission to make a fantasy movie reasonably seriously, and they did: it has strangely robust world-building for something so fairy-tale hazy; Marjorie Corso's costumes are silly but cool (going by this and Tower of London, Corman was extremely into weird hats); and the only thing about it that ever seems desperate was the thing Corman would've had the least control over, namely Les Baxter's uncharacteristically bad score, which punctures the matinee atmosphere with the orchestral version of carnival barking.  But even under the burden of farting French horns, it still winds up less slapsticky than either of the Price & Lorre horror-comedies on either side of it (whatever else it was, The Raven was a huge hit, and gave AIP faith in the genre), so that while "Black Cat" is goofiness counterpoised with brutality, and The Comedy of Terrors is outright farce, The Raven operates in a completely distinct third mode, a more-or-less straight-faced adventure film that simply happens to have funny characters.  (More than anything, in fact, it feels like a superhero movie, and it has practically the same plot as Star Wars, only Princess Leia is now Darth Vader's girlfriend.  If you don't notice the similarity, it's probably because hero's journeys to secure a birthright are so rarely done with 52 year old men!)

Lorre, anyhow, is given an unusually large comic relief role, but he's still a narrative factor, fluctuating between deuteragonist and second antagonist.  Price plays off of him perfectly, at his maximum capacity for being the mild-mannered and constantly-perplexed straight-man.  They're both overmatched by Karloff, who didn't like improvisation and so tends to act around Lorre rather than with him (but Scarabus is supposed to find Bedlo contemptible), and Karloff, even in his dotage—maybe even because of his dotage, though he unfortunately fails to entirely hide the pain of still being alive as he descends a flight of stairs—embodies a certain sinister imperturbability.  With his false garrulousness and his wrinkled scowl, he makes for a hugely effective fantasy villain, and while he's affably funny, I'm not sure he's given any dialogue that's expressly "a gag" until his very final line, which, while completely pigeonholing The Raven as an unabashed kid's movie, is also a bittersweet bit of meta-business regarding the passing of his torch to a new (or "new") generation of screen legend.  (For completeness's sake, the film's fourth-best peformance is either Hazel Court or the bird, and there's not one single thing about Nicholson that prefigures "movie star," or even "capable featured extra.")
It becomes a comedy, then, thanks to two things.  The first is by simply throwing all of the bric-a-brac of an AIP Gothic horror into a completely different genre, it winds up automatic self-parody, with all the usual revenant corpses and haunted castles now appearing before a very different set of characters who, rather than descending into terrified madness, can only perceive such things as the banal facts of life.  The second is one of the oddest narrative structures you'll ever see in any movie, with a breezy unhurriedness about everything, so that the stakes—"rescue Lenore from Scarabus"—don't even come up till almost thirty minutes of an 86 minute runtime have passed, and even then, only at the end of what amounts to the film's first proper scene, which somehow stretches itself out to two reels' worth of Price & Lorre basically just banging around.  (Befitting what is essentially a bedtime story, possibly only three things "happen" in the whole thing.)  The middle gets slightly draggy, perhaps, but this lackadaisical approach turns out to be great for sly comedy: there's terrifically amusing stuff that doesn't get stressed whatsoever, and my favorite single "joke," I think, is that to cook a potion with jellied spiders and dead man's hair and all sorts of other nastiness, Craven uses a whisk.
The Raven's remarkable low-keyness and its AIP budget combine for the climax, a magical duel between Craven and Scarabus, and I don't think it would be improved much by either more insistence or by more money.  (Okay, the cheesy optical effects would have been improved by more money, as would a misjudged angle on a shot with a dummy Price that desperately needed to be redone.  But there's an argument that movies like The Raven are precious precisely because of their visible seams.)  Obliged by Karloff's physical frailty to keep the final confrontation simple, Corman takes it down to a level of unprecedented minimalism, almost nothing more than the two magicians sitting in ornate chairs on the opposite sides of a chamber and conjuring jump cuts at one another, in what amounts to turn-based tactical combat.  It turns out to be impossibly charming: The Raven's magic has largely eschewed visual effects in favor of Méliès-style cinematic tricks, and the final duel doubles down on that, capturing the weirdness of magical war, stilted by unspoken and arcane rules, and waged with ideas as its weapons at the intersection of the psychic and the physical.  And because it was so cheap, it also gets to be long—eight minutes long!—getting downright hypnotic as the two adversaries perpetually outflank each other.  It sums up a decidedly unpretentious film—actually, what sums it up is the bow they put on Bedlo's arc, and the clever spin Matheson and Price put on the most famous words of the Poe poem, which Price delivers directly into the camera and from which they've audibly removed the quotation marks—but either way, The Raven is so adorably cute.  It's suffused with so much easy-going fun that it's miraculous that something made so resentfully could be capable of it.
Score: 8/10
Posted by Hunter Allen at 5:50 AM