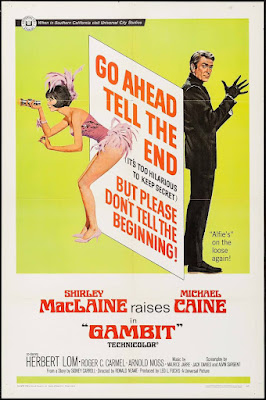 GAMBIT
1966
Directed by Ronald Neame
Written by Sidney Carroll, Jack Davies, Alvin Sargent, and Shirley MacLaine
Spoilers: well, I'm going to discuss the beginning whether they like it or not, so—apparently—"catastrophically severe"

I am not one for conspiracy theories, and suspiciously similar-looking movies come out in the same year all the time, so perhaps you could just call it the same solutions to the same problems of how to effect a fun, frothy romantic comedy heist film with pretensions towards class and refinement.  And yet it is awfully hard to accept that Universal's Gambit is the result of just dumb blind chance, or frankly anything less than corporate espionage (or, if its premise were never that closely-kept a secret, then perhaps simply an active challenge from one major movie star to her peer competitor); for it is very difficult to accept that Sidney Caroll's story or Jack Davies and Alvin Sargent's screenplay drafts were not written with an awareness of William Wyler's late-career masterpiece How To Steal a Million, presumably under the assumption that Steal a Million would be 20th Century Fox's big hit for the summer of 1966, rather than an overbudgeted commercial disappointment.
It's not only that Universal made a sexy couples caper, as that was hardly unusual—this had been a subgenre that had never been allowed to lay too fallow since being confirmed by To Catch a Thief, and had already been amply represented this year, not just by Steal a Million, but by Universal's own Arabesque.  If the similarities ended there, then, you wouldn't even notice, but if I described some unnamed film, premised upon an unnamed female screen legend's induction into crime and romance by an unnamed handsome Brit just now ascending to Hollywood stardom, who've teamed up to steal a priceless statue that just-so-happens to resemble the leading lady, from an art gallery where it just-so-happens to be protected by a grid of infrared beams... well, you'd be lost, because that exact thing happened in June in Steal a Million and then it happened again in December in Gambit, both delivered under the mod seal of Robert McGinnis poster artwork.  It doesn't help that all throughout a three-person commentary track for Gambit, all of them historians, they mention To Catch a Thief, Topkapi, Charade, and Arabesque (and even Trouble In Paradise, then thirty-four years old, and even the The Italian Job, which didn't exist yet), and at a certain point you start aggressively demanding the disembodied voices on your blu-ray explain themselves, asking, "were you explicitly told by Universal's lawyers not to mention How To Steal a Million, or what?"  Okay, yeah.  That was probably just me.  (Though I think they do mention My Fair Lady.)
I wish they had remarked upon it even slightly, because every little factoid they drop suggests, nope, they really were just independently-developed movies that happened to converge upon one another in impossible-to-ignore ways, and certainly it's not some outright clone, as its remarkable and unique first act immediately indicates.

That keeps Gambit spectacularly joyful right up until its third act, which, inevitably, is tasked with pulling this out-of-control contraption back onto its genre rails, and it can't.  It surely doesn't succeed on its other main metric: it's so bad at being a romance that if I didn't know that it was supposed to be I'm not sure I'd have figured it out, at least not till Nicole started making doe-eyes at her jackass boss.  It's not that Harry's sharp edges and Nicole's scatterbrain couldn't work, it's that they don't seem to have tried to make their dynamic work.  Neame and MacLaine and their screenwriters just plain forgot to put some middle part between Harry hectoring Nicole and Harry falling for Nicole; they never find much reason for Nicole to even like Harry.  It's certainly not because he's a good master criminal, and even if he were, Nicole somewhat deflates the heist movie in progress, as she grows incredibly scowly and square about Harry's whole plan.
In this respect, it does feel like it's trying to mirror Steal a Million, only incredibly badly: Steal a Million banked on the primal thrill of watching Audrey Hepburn slowly realize that doing crimes with Peter O'Toole got her wet; MacLaine takes the complete opposite tack, which might've made sense if Gambit had managed to incorporate Shahbandar more fully into the proceedings as something besides a jolly obstacle to Harry's scheme (and indeed, it actively runs away from that: one of the film's best unstressed jokes at Harry's expense is that, sentimentality for his dead wife's likeness aside, Shahbandar stopped grieving her long ago, and doesn't give much of a shit about Nicole merely looking like her).  Unfortunately, it's vastly more of a straight line we get than any triangle, and even that straight line feels dashed, with the distinct feeling that tentative romantic overtures should've gone into at least some of those narrative gaps.  It still functions, and the heist must go on; Nicole, portrayed by a flexible trained dancer, gets a crucial part to play after all, and this scene's especially thrilling because it was never in Harry's design (even if the crimped geometry of the heist strongly indicates that MacLaine's butt would've set the alarm off anyway).  But there's a very stupid simultaneous climax to the heist and to the romantic arc that somehow degrades Gambit more than all its previous romantic dyspepsia put together.
Even so, by the time it hits its third or fourth twist in its extended denouement—its very final frames—it'd gotten me somewhat back on its side.  I left it with a nice smile anyway, if maybe not the full-faced grin I had during the middle.  That middle is extraordinary though (and, thus, so is the beginning), and so I can't say Gambit isn't worth a spin even if its crappier parts, thanks to their placement, damage it all out of proportion to how actually bad they are.
Score: 7/10
Posted by Hunter Allen at 1:02 AM