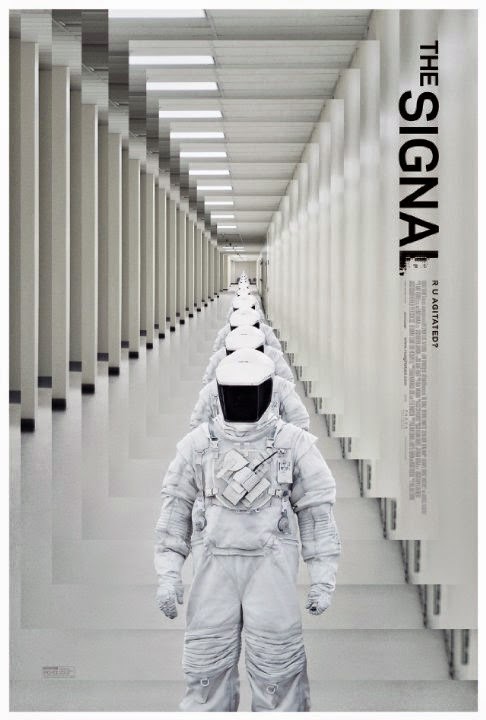 So, the short version is that The Signal is very possibly the year's dumbest film.  Yes, including Open Windows and certainly including Transformers: Age of Extinction.  Currently, its only real competitors for the cone-shaped crown are Lucy, Enemy, and Paranormal Activity: The Marked Ones.  (So you can see that competition is, actually, pretty stiff.)  The damning thing is that it is not even close to good enough for its stupidity to simply be ignored.  Yet the nature of The Signal is such that it deserves a milder damnation than the punishments received by its far more sinfully stupid fellow travelers.

The Signal begins with three students, two of them helping the other one move across the country to UC Berkeley, representing a move up from her former school, that lousy tire fire of a college, MIT.  However, the one we're most interested in is also the one whose dreams of marathon-running keep getting interrupted when he wakes up.  This is Nic, and his reality is that of ALS (or, in any event, a similar ailment).  It has cost him the unencumbered use of his legs, as is vividly depicted during his attempt to get everyone a tray of coffee, with exactly zero free hands due to his need to use crutches.  The other guy is Jonah, and he is slathered with enough nerdface to put to rest the possibility that there will be any kind of love triangle forming over the woman of their group.  This is Haley, the one they're helping move, and also Nic's girlfriend.

As Nic, Brenton Thwaites shines, in that low-key way that actors can shine when you feel it's unfair to even expect competence, but you wind up getting real professionalism.  Surely he's demonstrating here the capacity to render an entirely sympathetic protagonist, and in a movie that doesn't deserve his efforts, and might well have been better if he had sucked.  You know, I think this kid might go places.

Alternatively, he might be stuck in low-budget genre purgatory because for every time he gets a break with an Oculus, he agrees to appear in a movie like The Signal.

Nic is purposefully sabotaging his relationship with Haley because he fears that her year at Berkeley will wind up ending their romance anyway, on terms other than his own.  Since he's almost certainly right, it's hard to get too torqued up about any of it, although there are some interesting notes of self-loathing and inadequacy in the performance and script that arguably make this a better movie about ALS, at least as I suspect its sufferers actually suffer it, than The Theory of Everything, given that the latter movie was about a tenth level intelligence who had more determination than the entire offensive line of an underdog football team, and all the resources of Britain's upper-class educational system at his disposal, and a saintly wife (who went to the same school).

But it's not like any of this really matters, since it's just the human interest subplot to layer some (largely unnecessary) soul and motivation onto The Signal's main plot(s).  What actually matters is that Nic and Jonah are hackers, and they're engaged in a vendetta against another hacker named Nomad, whose signal (dun dun dun!) they have tracked to his Nevada base.  And when they take a detour to investigate, that's when things get all... science fictional.

There's a really great Banshee Chapter quality to the first act of The Signal, with its desert setting and horror-tinged mystery.  It keeps this up even once things go to complete hell and Nic wakes up, isolated, in a 2001-inflected secret government underground base.  The thing is, Banshee weaved a relatively tight web out its disparate narrative strands, and used their real-world basis as a source of profound creepiness and intrigue.  Banshee remained tremendously effective, all the way to its bleak and wonderful end.

The Signal does not do that, like, at all.  Instead, by its third act (of, it turns out, approximately ten) The Signal may have more in common with the likes of Stay Tuned, since with every new revelation, basically an entirely new motion picture begins.  The difference is that Stay Tuned was supposed to be a comedy.

Many of these revelations are preposterous, and some of them are both preposterous and idiotic.  For example, Nic is now in a wheelchair, after the incident that has left him with missing time and in the clutches of the villains from the X-Files, and he has not checked under the blanket that hides his legs, not in all the days that he's been confined.  Nor, evidently, has he so much as taken a piss, since when he finally realizes what has happened to his legs, he also checks to see if his wiener is intact.  This well-observed and psychologically accurate scene may well have made perfect sense in the first draft of the Brothers Eubanks' script, but they could only have kept it, because it's one of only two jokes in the whole movie.  Or, at least, one of the only two that were intentional.  And the unintentional ones aren't so much "funny" as they are "jaw-droppingly unrestrained, in their lack of thoughtfulness and quality."  (That said, the dick joke is funny; and the other intentional laugh, of which I will say nothing but the hint, "it's from a very famous movie," is as legitimately and profoundly good a riff on a horror trope as I think I've ever seen.)

Mark the time, because this unveiling is the exact moment that The Signal goes bananas, and slips grotesquely upon its own incompletely-shucked peel.

The Signal is something like a "good bad movie," in the sense that it remains completely entertaining but in all the wrong ways, thanks to the twisted ambition it displays in achieving the outrageously terrible.  Thus I shall refrain from even hinting at its further, also-terrible twists.  (And, believe me, there are more where that came from.)

But I am also very, very cross with The Signal, and I can't forgive it, even if it is something of a one-of-a-kind experience in elevated badness.  This is because The Signal starts out as a potentially fantastic movie, and—for going on fifty minutes—entirely fulfills that potential.  Thwaites, as noted, is rather good; meanwhile, Laurence Fishburne is on hand as the face of Nic's captors, and he is doing what Laurence Fishburne does, projecting a metastable combination of trustworthiness and threat.  And then there is the production design, which is wholly derivative, yes, but also gorgeous.  The cinematography is fit to match—not surprising, since that is how director William Eubanks pays his bills.

Finally, there is the atmosphere and the tone and the pace of the piece, all rather superb, and especially in this last respect: the first half of The Signal savors its mystery, and is patient with its scenario, yet it is not so disinterested in the audience's engagement that it ever stops moving toward a resolution, however nebulous (and ultimately insane) that (those) resolution(s) wind(s) up being.  Thus, if you'll permit me one last comparison, the first half of The Signal feels more than anything like the honorable effort that Beyond the Black Rainbow could so easily have been, had that latter film been made without its defining attitude of contempt.  Unfortunately, the only nice thing to be said about The Signal is that it's not contemptuous in the exact same way.  Rainbow's withered pretension is traded in for The Signal's glorious stupidity, a half-hour constant explosion of nonsense that even the film itself doesn't seem to think you could possibly buy.  Instead, it just presents itself to you and says, "What are you going to do?  Stop watching me shit myself?"

Along with being the year's dumbest movie, The Signal is likely to also be the best movie of its kind this year—and I only quail at saying "definitely" because I haven't yet worked myself into the lather I think I need to be in, in order to watch Winter's Tale.  But there's a bitter aftertaste to The Signal that last year's champion, Temptation: Confessions of a Marriage Counselor, never had.  The Signal is a "good bad movie," yes, but it's a "good bad movie" that wastes a truly great one with all its childish and foolish antics.  This is something that absolutely cannot be condoned, and should not be rewarded.  It's a "good bad movie" and it deserves a "good bad grade."