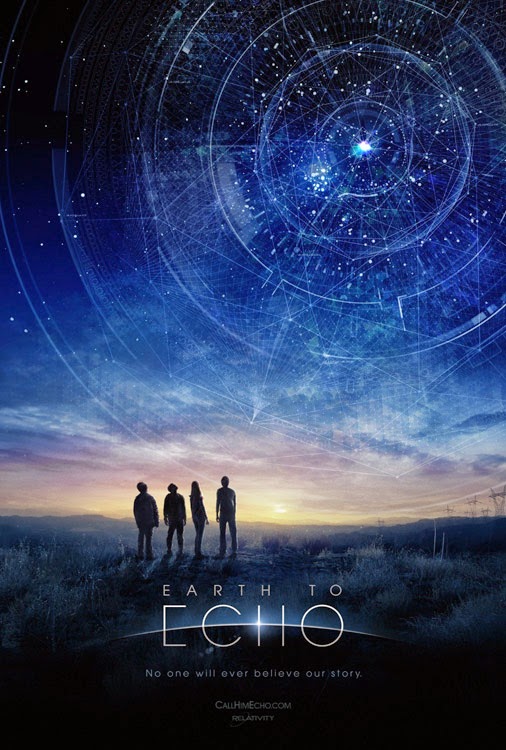 I say that the spoilers here are "mild," but there's no way I could spoil Earth to Echo, unless it was your very first movie of its kind.  From the first shot to the last reveal, Echo is the simple extrapolation of its premise within the kid's adventure subgenre, and is almost willfully formulaic and conventional in regards its structure, pacing, and general content.  This, of course, is largely okay.

What is also okay is that Echo is a formal experiment, to see if found-footage could perform outside the genre of its origin.  That's definitely putting it too forcefully: "experiment" would suggest that found-footage has never escaped the horror genre before.  Obviously, it has; it got halfway there in Cloverfield, kept going in Apollo 18, and pulled away entirely in Chronicle.  As regards Echo's own approach to found-footage, it's certainly more refined than Cloverfield's.

Of course, so was Hans Moleman's in Man Getting Hit By Football.  Cloverfield's found-footage represents not so much a bar of quality as it does a formal choice so devastatingly harmful that you can only refer to the finished product as a cautionary tale.  Happily, though, its lessons seem to have stuck, and perhaps nothing since (within horror or without) has been half so unwatchable as that.  There have even been triumphs... well, at least one triumph.  On the extreme end of the found-footage spectrum is Europa Report, the only found-footage movie where the found-footage format did not immediately impose an insuperable aesthetic liability upon the material.

Naturally, then, found footage is a liability in Echo, but not—by the standards of the form, anyway—a serious one.  But maybe I'm not being sufficiently congratulatory: in Echo the camera doesn't shake unnecessarily; the angles chosen might not be perfect, but they are artful and deliberate; and some of the shots are actually, legitimately good.  Miraculously, this is the case even though large segments of the film involve the cast running about.  (And, having watched the two back-to-back, the professionalism in Echo made me wish Echo's cameraman Tuck had been around to do the cinematography on Coherence, too, since hardly a single moment of Coherence can be praised in the same way.  To be clear, Coherence is a movie with a third-person camera, and Tuck is a thirteen year old child.) 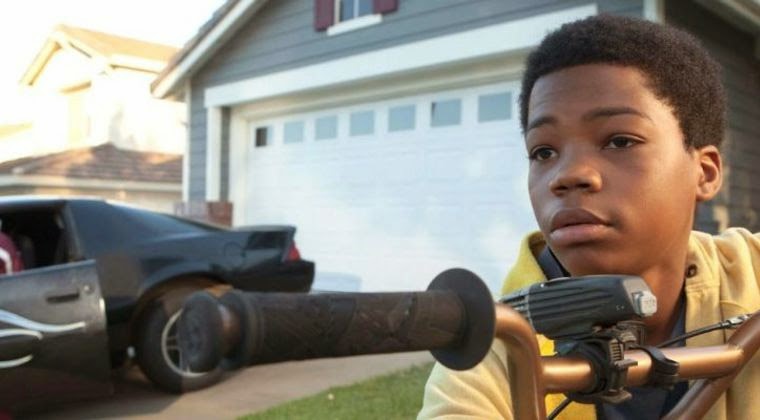 Meet Tuck.  Who knows?  Perhaps in 30 years, we will speak the name "Astro" in the same hushed and reverent tones we do Ethan Hawke's.

Echo is, essentially, a mash-up of The Goonies, Explorers, and E.T, in that order.  To make way for a new highway, the State has exercised its power of eminent domain over the neighborhood inhabited by best friends Tuck (the narrator, who makes movies, including this one), Alex (the foster kid with textually-raised abandonment issues), and Munch (the non-athletic socially awkward kid with a STEM degree just waiting on him at the nearest engineering school).  For narrative reasons, the parents have apparently sought new jobs in geographically disparate states, rather than moving to different parts of the same town.  Thus threatened with the dissolution of their lives in the way that only kids can be, they resist the future in the way kids usually do: ineffectually, with a lot of whining and acting-out.

But since that by itself would just be depressing and dull, the day before the move they begin receiving strange signals on their phones, which they eventually decode as a map.  Through juvenile subterfuge, they follow the signal, and there they find the small, robotic, cute-as-a-button alien that communicates with little beeps, predominately in the form of 20 Questions.  They dub "him" Echo.  A girl soon enters the mix, because it's 2014 and we need a girl, though the extent to which Emma challenges the stereotype of the girls that have always been in these boys' own stories—clearer-headed, more mature, more cunning, and yet for some reason not the hero—is approximately nil.

But all isn't well.  Echo is damaged.  (Yes, the happenstance of how he got damaged is dispiritingly easy to predict.)  The kids, though initially terrified of him, soon agree to undertake a quest to fix him. 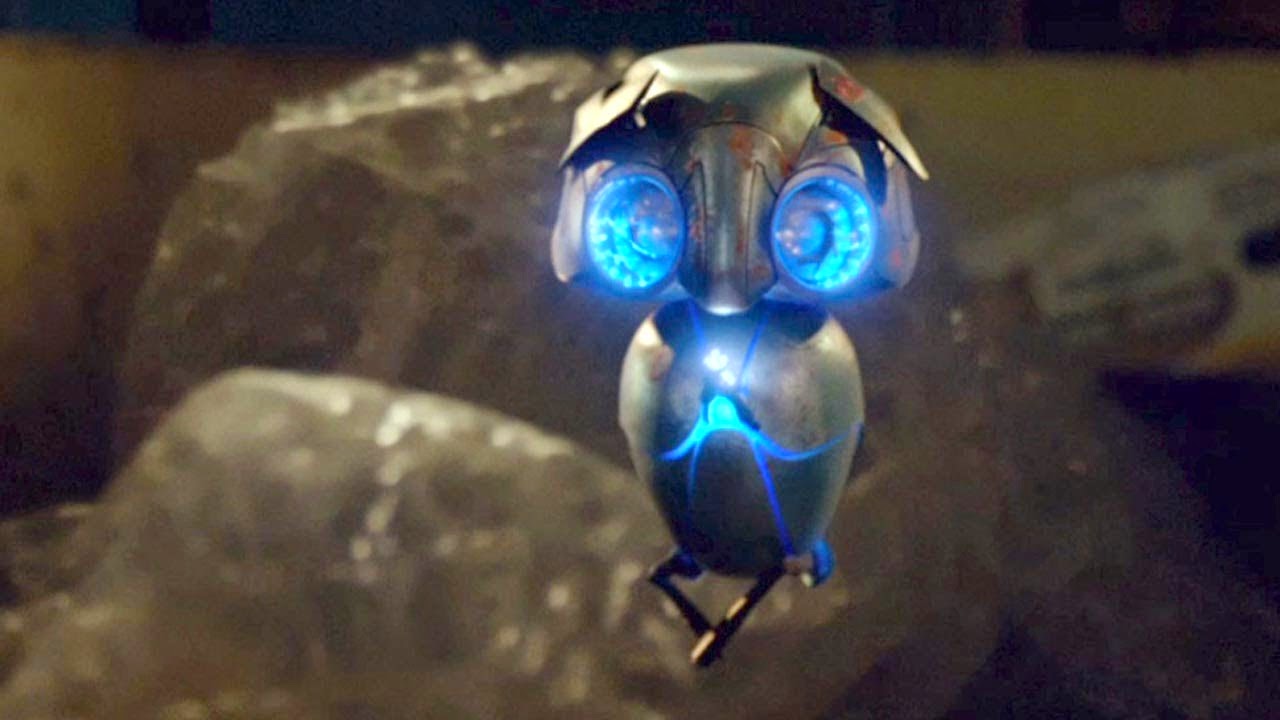 It's all kind of familiar and perfect, though I mean "perfect" in a decidedly informal sense.  For actual perfection, look to, well, The Goonies and Explorers.  (Especially Explorers, two-thirds of the most perfect adventure film ever made, and only not three-thirds because literally nothing could have lived up to the promise of first two.)  Meanwhile, even the less-than-perfect films from the flowering of kid's adventure in the 1980s have a more acute sense of adventure.

Perhaps they also have more edge.  Cf. "Who put piss in my apple juice?"  Or if Little Monsters' signature moment is too crass, imagine showing up unaged after an absence of over a decade, during which your parents have grieved your presumed death.  Such was the almost inappropriately-heavy scenario envisioned by Flight of the Navigator.  Yet Echo isn't necessarily so meek—and this is all the more surprising since Echo is disadvantaged by coming out in 2014, when the rough patches ordinarily get sanded down in kid's entertainment.  (In theory, anyway.  Many awful ideas do still wind up in kid's cinema, but almost always by accident.)

If not to total success, Echo needs to be praised for straining against this trend, presenting a clutch of little boogers who are kind of shitty in the way that tweens really are.  For example, they're actually permitted to cuss a little.  Needless to say, it's less than seems appropriate, given the circumstances—this movie really needed a PG-13 and at least one "fuck!", but honestly this is true of virtually all movies.  (How many times would a 27 year old man, realistically, have said "fuck" in TRON: Legacy?  It would probably be half his dialogue.)

But merely having children swear at all means Echo achieves a level of verisimilitude that's become rare in movies that are also made for children.  Echo has more than a few situations and lines—the latter almost all courtesy Munch, easily the best in show—that do go off our 21st century reservation entirely.  Of course, it's very easy to be pleased with a true 80s-style kid's adventure in these more stultifying times; but it should be said that Echo doesn't escape the shadow of the other recent attempts to revivify the genre in Super 8 and Joe Dante's own The Hole.  And Echo is lost in the darkness indeed, when considered in direct comparison to its 20th century forebears.

It doesn't help that Echo makes such direct comparisons unavoidable.  The latter half is pretty purely E.T., so far as I recall E.T.  (At least Super 8 twisted it up.)  And its riffing on Explorers is such that it near-replicates one of the more thrilling and surprising sequences from that film.  It does so to good effect the first time, and it does so to superb effect the last time, too (whereupon Echo does come into its own, with its single brief—but very great—setpiece).  It's only a shame that the middle fifty times become a bit repetitive.

The canny and learned reader will know I refer to the scene in Explorers when they first establish the transport bubble, and destroy River Phoenix' house and come very close to putting golfball-sized holes in all of their own heads.  Those who have seen Echo know I mean the many, many scenes where Echo seizes everyday objects with his telekinesis in order to rebuild himself and his alien instrumentality.  After the first couple of times this becomes quite boring, thanks to Echo's greatest weakness, which is clear for all to see either when set against its genre-mates, or without reference to any other movie at all.

The true problem with Echo is that the filmmakers are truly adamantine in their resolve that nothing in their movie ever evoke a legitimate physical threat against its heroes—hell, not even against its villains.  You can have your kids say "shit" all you want.  The true hallmark of the 80s super-classics wasn't moral decay; it was real and palpable peril.  (That Echo's reconstructive capacity also introduces a film-breaking plot hole—Echo is Magneto, yet Echo is somehow also helpless and pitiful—seems to have escaped their grasp entirely.)

And speaking of plot holes, we can give Echo credit for doing something with smartphones that isn't just ignoring them, but given that Echo can both control their phones and understand English, it's strange how pointedly the film refuses to address the question of why Echo cannot speak to the kids via text—or even synthesized voice.  To the extent this would rob the film of some of its charm, I'm not likely to hold it against it.  On the other hand, since it might have obviated the impression a cynical adult like me might have gotten—that the friendship between Echo and the children rests upon them doing things that benefit Echo—we can feel somewhat let down that the title character is deliberately left as a bleeping cipher.

Maybe it's for these reasons that Echo didn't fully connect with any audience sufficient in size to make it the hit it clearly sought to be.  Perhaps it was too derivative, too manipulative, and a little too haphazard in its construction.

But to say that aloud is far more cruelty than I ever intended to display toward what is, in the end, a very fun, very funny, deeply-felt, and extraordinarily-sweet dose of saccharine, delivered via one of my favorite half-dead subgenres.   Perhaps Echo is not so good that it truly deserved the honor of bringing kid's adventure fully back to life, but it's absolutely good enough that I sincerely wish it had.