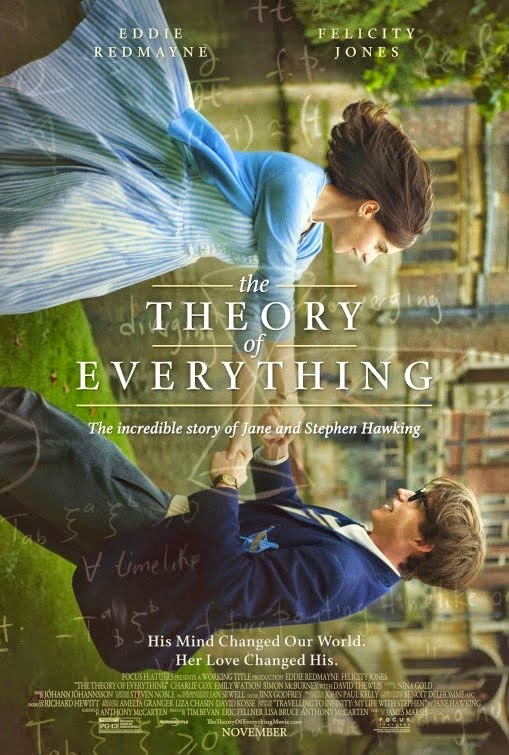 There is a moment in The Theory of Everything that revolves around the evaporation of black holes.  I find it a fascinating subject, since it's one of those instances where quantum mechanics interface with Einsteinian mechanics and change the whole thing.  They even named the result of this process—Hawking radiation—after the subject of this biopic, Stephen Hawking.  (If you thought the subject of this biopic might also be the author of the memoir upon which this biopic is based—well, you are dumb.  But more on how dumb I am later.)  The simplified way black hole evaporation works is this: the gravitational energy of the black holes creates particle-antiparticle pairs, but due to the indeterminate nature of these particles' creation, they may be formed beyond the event horizon.  This means that they can ultimately escape the black hole's gravitational grasp, find their antiparticle mates, annihilate, and turn into gamma photons.  The loss of mass makes the black hole smaller; the smaller the black hole, the faster this happens; and eventually even the largest black hole will become a mighty gamma ray superdupernova.

That this is also a potentially romantic metaphor is something you can simply ignore, as the screenwriters probably wisely did.

Either way, I just taught you more about cosmology than Everything bothers doing in its entire running time.  And, like I said, I am dumb—indeed, so terrifyingly stupid that I don't even have a STEM degree.  The only science you'll learn from Everything, sadly, is that Tide detergent fluoresces under ultraviolet light, and that stars also emit ultraviolet light.

They are doing some truly groundbreaking shit at Oxford.

The best you can say about this aspect of the film is that Everything isn't being sold as an educational experience that will, instead, actively lower your intelligence if you pay attention to it.  Thus it is on solider footing than, say, Interstellar.  Still, it is annoying, and the really galling part of it is that Everything just presents such sharply counterintuitive ideas like exploding black holes as random factoids, haughtily unconcerned with whether you understood it, or whether you did not.

None of this would be a really serious problem, were it confined to the scientific world in which Stephen Hawking works—and in which Everything is interested in solely to the extent that this work also made him famous.  It is, however, very much a problem when it is also endemic to every corner of Stephen Hawking's romantic life, the nominal focus of the film.

And this is "Stephen Hawking's romantic life" we're looking at.  Jane Wilde (spoiler: she later changes her last name to "Hawking") could probably not be more hazily-defined even if everyone involved was trying—partly because I'm half-certain they actually were.  This is possibly because the scope of Everything is too wide to really look at anything closely—it encompasses Stephen Hawking's life from the months before his diagnosis with ALS to that time he fantasized about picking up some chick's dropped pen at a press conference—but the real reason is that no one especially cared.

And while I'm rather sure there was a great deal more to Jane Wilde and Stephen Hawking's marriage than a case of Christian martyrdom that they both kind of gave up on out of exhaustion, very little of it is really present in the movie—but then, that would require Jane herself to be present in the movie.  In the sense that Felicity Jones is made of atoms that can both refract sufficient visible light to expose film and make sounds of sufficient amplitude to be picked up on the dialogue track, she is; but very rarely does Everything take interest in her as an individual, only slightly more often than it does all the other, largely-anonymous folks who make Stephen's life and work possible.  (Arguably, Stephen's nurse and second wife Elaine Mason, barely in the movie, winds up more sharply drawn than its co-lead.)  As for Jane's own work—she has a Ph.D. too, you know—the boredom and contempt Everything displays is so blatant it almost rises to the level of a theme.

It's known that the later years of the Hawkings' married life were not entirely happy, and they both engaged in physical and/or spiritual infidelity.  This is communicated, and that is basically all.  I don't believe I have ever seen the act of fucking depicted so maddeningly elliptically in my entire life.  "You can have an affair," Stephen tells Jane in barely-extant code, an offer she takes him up on possibly never.  It's very, very hard to tell.  It sort of retroactively ruins what would be the single most moving scene in a picture that has already unavoidably entered emotionally manipulative hyperdrive, when that scene's outcome is "I dunno, maybe she fucked the piano teacher the next day, or maybe she fucked him on a camping trip, or maybe she didn't fuck him till they were married, or maybe she never fucked him at all.  Why do you care about this, anyway?  I don't."  So says The Theory of Everything.

Hell, with the exception of one scene, the only way we know Stephen and Jane themselves are fucking is that she must be getting the semen for her offspring somewhere, and he's the likeliest source.  The exception, of course, is truncated by some outright-offensive blunt-force editing that makes a joke out of their union, and spares us from the abject horror of watching the very thing this movie is supposed to be about.

But as pathetically milquetoast as the romance is, and despite the dismal primness of James Marsh's exploration of it, I can't say I even disliked Everything, for it has its compensations.

Foremost amongst these is (as I'm sure you know) Eddie Redmayne.  He's rather perfectly cast from a physical standpoint, at least insofar as this is a movie and thus requires Pretty!Stephen Hawking rather than a Real!Stephen Hawking.  (At least he resembles Real!Stephen, in much the way that Felicity Jones as Pretty!Jane Wilde fails to resemble Real!Jane Wilde at all, except in the sense both are Caucasian brunettes.)  It's been said a thousand times already, but I'll say it again because he deserves it: Redmayne does some superbly effective work.  If it's he who gets the Oscar, I won't be as angry as I could have been at Jake Gyllenhaal's probably inevitable loss.

The sheer technical acumen Redmayne brings to the progress of Stephen's disease is profoundly affecting; whatever emotional heft Everything manages is almost entirely thanks to his depiction of ALS.  Better yet, though, Redmayne embodies Stephen Hawking as we think of him—a funny, vivacious dude with an iron will matched by his mischievous streak, tragically trapped in a dysfunctional body, but totally unwilling to be destroyed by it, or even overtly sad about it.  That this is completely and totally unsurprising (and even kind of distancing) doesn't mean that it isn't, in its own way, flawless.  There are many tears to be jerked from the facts of Stephen's bravery, most notably the unfathomable strength in his character that permitted him to do what only a great man could have done in his situation, namely a hilarious Dalek impersonation.  That's probably the easiest way to relate how perfect Redmayne is, within the constraints of this highly-constrained picture: everyone who had been very sad a few moments earlier, laughed.

And dear Christ, I hope that was based on true events, otherwise we're all of us monsters who deserve to die.

The other pleasant thing about Everything cannot be given nearly such unalloyed praise.  I'm talking about its outlandishly bizarre cinematography and production design, which seeks to key nearly every shot to gaudy, Suspiria-like ultra-color.  The choices appear to be calculated to evoke any kind of specific feeling exactly once, out of something like eight billion different color-coded scenes.  When Stephen is very and understandably depressed due to his recent diagnosis of ALS, he is in the Red Room of Ultimate Despair; when Jane enters the Red Room of Ultimate Despair, the Golden Light of Angels' Mercy floods through the portal.  Later, however, there will be the Green Church, the Blue Hospital, the Ocher Bridge, and so forth, because those are also colors that you can make things.  But I like color coordination for its own sake, and although I don't think this was supposed to be an adaptation of Masque of the Red Death, for me this elevated the experience of witnessing the film to a level of basic enjoyment that it almost certainly would not have attained otherwise.  Intellectually, however, I am capable of recognizing it as at least a little bit ridiculous.

But Marsh, Benoit Delhomme, and John Paul Kelly's indulgence in Crayola cinema is not nearly so laughably ridiculous as the acts committed by another arm of the cinematographer's art.  If I had not read all the reviews warning of precisely this, I would have been sure that Everything was being projected out of focus.  This is not the case, though it might've taken me as much as a solid hour to realize it simply by watching the film.  The objects in Everything are so damned soft that I reckon you could sleep on a stack of a hundred Stephen Hawkings, and still feel the pea on the other side.

To the extent that Everything is abject mush, this is appropriate.  The thing is, such a jagged story, of open relationships, enormous physical issues, and—we can face it, if the movie won't—failed romance, should never, ever have been mush.  Every time you think it might be headed toward a kind of psychological truth, it applies a new coat of molasses upon the screenplay, and a new coat of vaseline upon the camera lens.  I wouldn't change the ending to Everything—even if I could, since presumably something like that conversation did happen—but this movie scarcely earns the kind of catharsis it so desperately wants, not when there was hardly any tension to snap in the first place.

And hell: my favorite physicist is David Deutsch, anyway.