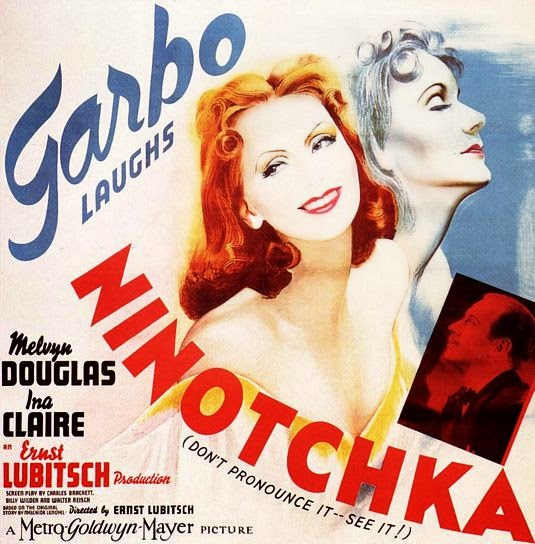 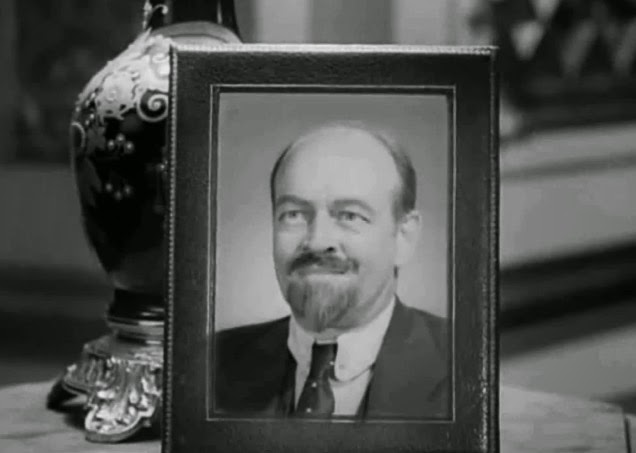 Ninotchka—"don't pronounce it, see it!" the tagline condescendingly explains—is a grandly romantic fairy tale, set against the rise of the Soviet Union as the greatest external challenge the West ever faced, and taking place mostly in Paris, represented (as usual) as the sexiest city on Earth.  You can tell it's a fairy tale because of its tone, which is about as fanciful and antirealist as you can get with such a contemporary and politically-charged backdrop, and because of its details.  These details include such curiosities as using "the study of advanced engineering" as an excuse to get a Soviet apparatchik atop the world-famous, half-century old Eiffel Tower.  They also include an expatriate Russian noblewoman with a name that is not, in fact, pronounceable in the Russian language.  Finally, they include a third act complication that, sadly, does not result in anyone getting icepicked in the fucking face by the NKVD.

If nothing else, at least now I know from whence Bluth and Goldman's Anastasia lifted its third act.  However, "a survivor of Marxism-Leninism experiences a revelation in the midst of capitalist plenty" is a trope that has existed in fiction since December 1917, at the latest.  Indeed, I have little doubt it existed, albeit in slightly different form, long before the Revolution, and Ninotchka is as guilty as any fiction of confusing the idea, "communism doesn't really work," with the older and more factual notion it replaced, "Russia has always been devastatingly poor and awful."  Ninotchka is likewise absurdly happy to denigrate the poverty of daily life under Soviet rule—the communal apartments, the scarcity of eggs, the lack of fashionable underwear for hot women.  However, it contrasts the Soviet existence not with the proletarian destitution of life in the Depression-afflicted West, but instead with the enormous riches of France's very richest shits.  That this is not very fair is not Ninotchka's concern.  Thus it dances very close to the abyss of wealth pornography that has forever defined Hollywood filmmaking at least as much as continuity editing, nonconfrontational emotional manipulation, and awesome explosions.

But Ninotchka is constantly drawn back, at least a few crucial inches, by a script that actually realizes it's wealth pornography, which is probably the most shocking thing about it.  This awareness is a miracle, for it clears the field for the viewer to take pleasure in what is, after all, a simple and heartwarming story of true love.  Even more importantly, this awareness is the wedge that allows Ninotchka to be its bruisingly funny self.  Most of the jokes are at the expense of the (already failing) Soviet experiment, and this is to be expected; but it also seems very aware that the frivolities of Paris are themselves the result of the great extractions undertaken by the parasite class upon the commons.  (Why, the movie even has jokes about false consciousness.)

Ninotchka is the story of Nina Ivanovna Yakushova, but it doesn't begin with her.  It begins with a delegation sent by the Soviets to Paris, comprised of a triumvirate of Foreign Moron stereotypes, namely Iranoff, Buljanoff, and Kopalski.  Their job is to sell Imperial Russian jewels confiscated years ago.  Their main accomplishment, however, is getting seduced by the charms of Paris—as offered up, wholesale, by our hero Leon.  With his help, they waste the Soviets' dwindling funds upon enormous hotel rooms, women who may be actual prostitutes (though the Hays Code makes it hard to tell), and all other manner of vast carelessness.  But Leon isn't just in this for the chance to party on the workers' and peasants' dime: he's the agent of the Duchess of Badenov, Swana, an aristocratic Russian exile whose confiscated jewels just so happen to be the exact items the Gang of Three are here in Paris to peddle.  (Incidentally, Leon is definitely an actual prostitute—but I presume it is not because of the Code alone that they fail to frame the relationship quite that bluntly.)  The upshot is that Swana manages to get an injunction against the sale or movement of the jewels.  Back in Moscow, Dracula is deeply displeased, and so our story takes a turn.

For into the midst of this goofy boondoggle finally enters Comrade Yakushova, a committed Bolshevik, CPSU member in good standing, and former Red Army sergeant (indeed, she has actually killed a man, a state of affairs not often seen in romantic comedies of the time).  In near-monotone, she expresses disapproval of every damned thing she sees in Paris, from the antics of her feckless underlings, to the carnival atmosphere of the city that snared them, to that ugly, symbolic, strictly Chekhovian hat, to the sexually aggressive fellow she meets by chance, and who falls in love with her, and who is—of course—none other than an unwitting Leon himself.

But who could blame him?  "Ninotchka," as she'll soon become, is basically the perfect woman: gorgeous, rationalist, leftist, and so materialist that she prefers to describe attraction as a chemical process.  During their initial courtship, she essentially tells Leon to shut his stupid romantic face—but she does so with a kiss, because that's far more enjoyable than listening to him prattle on about "love."  Of course, she is describing her own feelings, and they're much the same, only she's doing it in the most direct way possible.  But then she finds out who he is; and then they decide they don't care; and then things get worse.  It is a romantic comedy, after all. 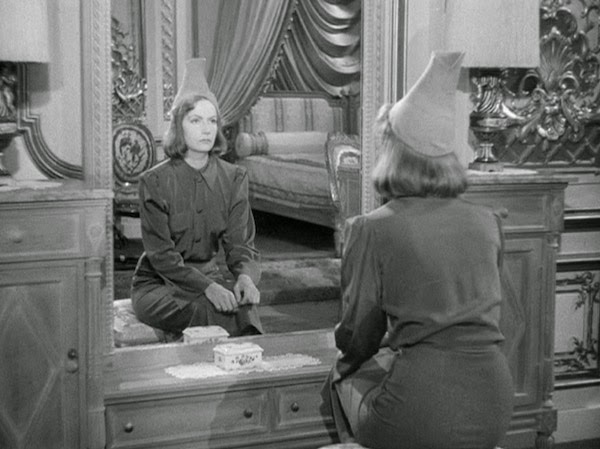 Ninotchka is at its most consistently funny before Yakushova melts into the warmer woman of the title.  Greta Garbo, statuelike beautiful person, was unknown for laughs, but it turns out she was very good at it, achieving perfect timing and subtle shadings with the material, as an adorable Red robot programmed for anti-capitalist comedy—as well as revealing, self-deprecating humor about the state of the Soviet Union under Stalin.  "The mass trials were a great success!" she exults.  "There will be fewer but better Russians."  And that shouldn't even be a joke.  But it is.

Ninotchka was written by a whole mess of people, but maybe the most audible voice is Billy Wilder's, the guy who twenty years later made a "comedy," The Apartment, where the funniest joke—maybe the only joke—is about suicide.  (The Apartment also did not like capitalism.)  Not that Wilder was incapable of levity—Some Like It Hot is enormous fun—but his sense of humor tended toward pitch black.  Of course, the content and historical context of this film would make anything less seem kind of awful and false: Ninotchka was released one month after Poland was invaded by Nazi Germany.  A title card to open the film impresses upon the viewer that the filmmakers are, in fact, aware that France is now at war.  Furthermore, during its run in theaters, the USSR was revealed as a practicioner of realpolitik just as sociopathic as any fascist nation, when they invaded Poland too, becoming in essence an ally of Hitler's war effort for two dark and miserable years.  The Soviet Union's internal crimes were reasonably well-attested beyond its borders, as well, thanks to Leon (ahem) Trotsky's vociferous condemnations of the degenerated workers' state, amongst others'.  This is, of course, on top of the general antipathy held toward communism in the West ever since we decided to no longer actually read the Bible.  And that's why it's such a delight that Ninotchka is never really turned: as intoxicating as Leon's expensive champagne is, when she does get drunk on it, her first instinct is to spread propaganda in the ladies' washroom.

Ninotchka's first hour is, yes, more consistently funny—and I think Garbo is at least as pretty in her socialist attire, as she is in her evening gowns—but the single biggest laughs wind up in its latter, more sentimental half.  They continue to range far afield, however, from the extra-dark (the pop of a champagne cork staged as an execution by firing squad) to the literally cartoonish (I will never forget Smilin' Lenin). 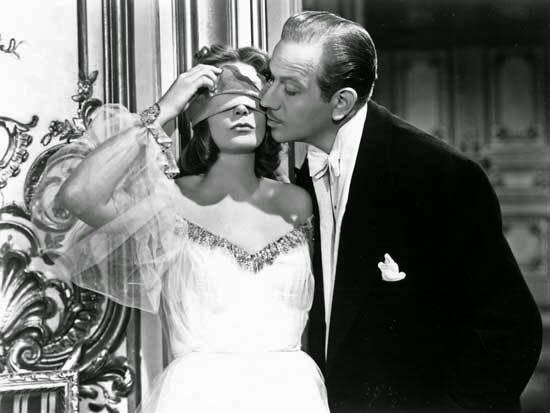 It's Lubitsch's contribution that leavens Ninotchka, permitting it such successfully effervescent shifts in tone, from the funny, to the beautiful, to the depressing, but never, ever too depressing.  It's his Touch, if you must, though he has made some subpar movies afflicted with that Touch, like the bizarrely overrated Trouble in Paradise.  The famous "Lubitsch Touch" might too often mean "the pain of infidelity is laughed off as unimportant," which is why Trouble is so problematic (see also, to a lesser extent, To Be or Not To Be).  The best of his movies that I've seen will probably always remain Design For Living, which squares that circle in the cleverest way.  Ninotchka isn't an exception to Lubitsch's predilection for love triangles: the drama of the third act is precisely the result of Swana's somewhat-justified vindiction.  However, Ninotchka avoids the pitfall inherent to this—framing Leon as a complete jerk—through the expedient of making Swana irredeemably vile, going so far as to have her utter the meanest line in a sometimes exceptionally-mean film:  "Yes, you're right about the Cossacks.  We made a great mistake when we let them use their whips. They had such reliable guns."

The ultimate point of all these barbs thrown back and forth across the Soviet frontier is not to minimize the unforgivable excesses of Stalinism, nor to gild the hollowness of liberalism, but to put them in perspective.  The result is a humane film about love, that finds ideologues who think of nothing but the past and future without taking time to enjoy the present both absurd as well as sad.  Therefore, taking place as it does in the midst of a Depression and upon the eve of World War II, it's just about as solipsistic a film as was ever made.

After all, inserted title card aside, it expressly doesn't care about the war, because all of its concern is directed toward its two delightful characters.  They take delight, primarily, in each other—Ninotchka and Leon are not overconcerned whether they wind up in Paris or Moscow (or Istanbul, of all places), so long as they're together.  But it's also all but impossible to criticize Ninotchka on its implicit rejection of politics, when it takes its own stand about what makes a life worth living.  Above all, this is love; but Lubitsch' philosophy is incomplete without pompous assholes like Leon falling backwards out of their chairs in the midst of their most egregious pomposity, all to make a woman laugh.  And that sounds about right to me. 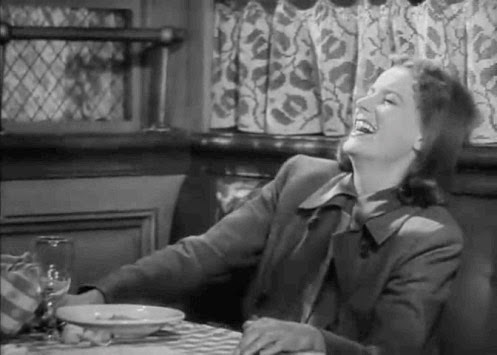