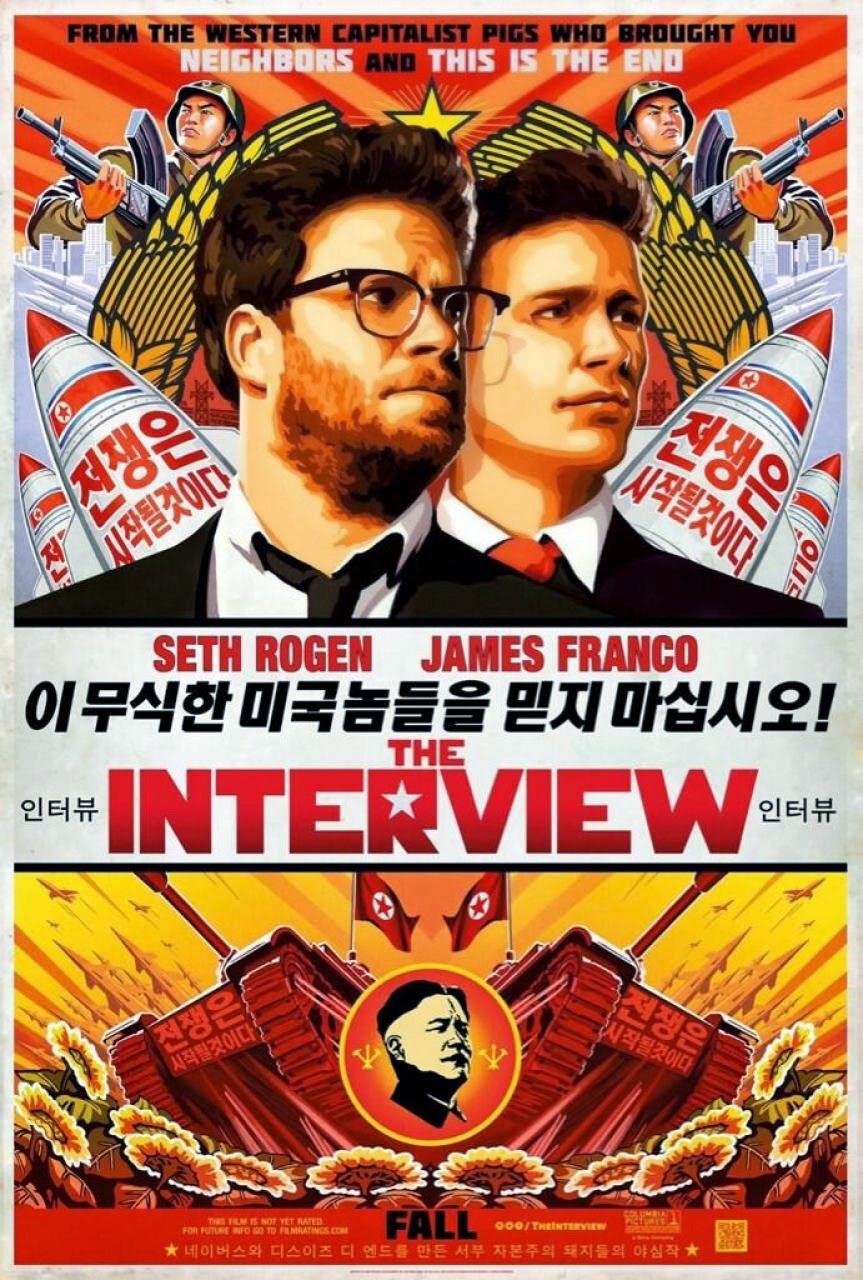 You almost won, but you're on my computer now, Jong-un!

I'd be remiss not to acknowledge the context in which The Interview arrived in my eyes and ears, but the Sony Hack is so infamous by now that it's unnecessary.  Let us simply say that this act of war had, for me, an unexpectedly happy ending: thanks to Sony's ultimate decision to release The Interview, in the Theaters of the Willing and on the VOD Services of the Also Willing, I was permitted to enjoy their film in the solitude of my home, rather than being forced to brave the pity and shaming of my fellows, all so I could go watch the new Franco/Rogen boner comedy on Christmas Day by myself.  Whatever The Interview is (amusing and provocative), and despite what it sadly isn't (good enough to live up to its inflated expectations), I will say this: so far it has been the high point of my self-imposed Yuletide exile.

Dave Skylark and Aaron Rapoport are the host and producer, respectively, of Skylark Tonight, presumably an effective parody of the kind of entertainment news program I don't watch.  A pair of great celebrity cameos enliven matters as we are given a sense of our deuteragonists' shallowly sensationalistic routine.  On one hand, we have Aaron.  In this film (and this film alone), Aaron qualifies as the serious, sober-minded straight man.  He's stuck in a rut, and a chance encounter with an old journalism schoolmate brings his self-loathing into the full bloom of incipient change.  On the other hand we have Dave.  Dave, in Franco's delirious conception, is the film's full-retard inciter of incident.  Dave ruins every plan, is easily seduced by evil, and doesn't even know his animals.  Dave is my favorite.

Aaron wants to make their show a little more high-brow.  Because this is a co-dependent homoerotic buddy comedy, Dave supports him.  In fact, he supports him so wholeheartedly that he comes up with half of the film's premise: learning, via a facile reading of a Wikipedia page, that one of North Korean dictator Kim Jong-un's favorite American programs is the very show they happen to run, what if they did what no other journalist could, and scored an interview with the world's single most dangerous man?

Once they have achieved this feat, CIA agent Lacey meets them with the other half: what if these bumbling fools, seizing the opportunity presented, assassinated Kim Jong-un, for 1)freedom and 2)America?

Arguably the strangest thing about The Interview is that they actually say yes.  No money is offered.  No leverage is applied.  There's the distant prospect that Dave might get to have sex with a woman who looks like Lizzy Caplan, which would be motivation enough to murder all sorts of strangers, but this is vague and doesn't help Aaron anyway.  Nonetheless, the two immediately agree to this illegal and dangerous mission.  The impression the cynical person might get is that they are aware that this needs to happen in order for their film's plot to continue.  On the level of text, however, they apparently undertake the CIA's dirty work purely out of the goodness of their dumb hearts.

Either way, we have a real movie on our hands, a thriller-comedy and a satirical slap at the ridiculous man it was custom-designed to offend.

The thriller part of that thriller-comedy is very stupid, conveniently for its very stupid heroes.  The comedic part is very stupid, too, but this is of course less of a liability.  No, not every joke lands.  The line between "this is happening in the North Korean dystopia" and "this is actually racist" is inevitably crossed; by my count it only happens twice, but so blithely that whoever wrote the lines deserves to be extra-ashamed.  Likewise, there is a belief that it's amusing to call things "gay," with the implicit understanding that it is the immaturity of the characters being presented rather than actual homophobia; this is proven correct about half of the time.  There is also a truly odd obsession with LotR esoterica on the part of Dave.  His references aren't, really, even couched as jokes.  Yet (at great length) this running "gag" comes around to being mildly funny—once the characters in the film finally get sick of it, too.

But the bread and butter of a Rogen-Goldberg joint are jokes about dicks, pussies, assholes, and the full spectrum of biological fluids, especially cum.  Their fixation is brought to vivid life by the hilariously inane word pictures Franco offers.  Perhaps "hilariously inane" could describe Franco's entire comic persona; but I fear you might take that as a criticism, rather than as the robust compliment I intend.  No, I know he's not everyone's favorite.  But I love this guy: I love his delivery, I love his weird face, and I love his unflagging belief in the human organism as a laughable, lubricated machine.

If one image could ever capture the soul of a performer, I have found it.

As for The Interview's satirical slap: it's palpable; it's effective; it is not elegant.  I'd love all three, but honestly I'd take the latter over either of the former.  The most disappointing thing is that Rogen and Goldberg achieved a hat trick the last time in This Is the End.  One of last year's very best pictures, The End raised my expectations in a way that not even wounded jingoism could have.  The Interview doesn't measure up, and its mistakes, strategic and tactical alike, litter its runtime.

Deciding not to be counted amongst those mistakes is Randall Park, whose performance is (with the exception of Franco's semen comedy) the best thing The Interview offers.  His Jong-un is fascinatingly calibrated: he's a schlubby nothing who had power thrust upon him, but at such a very tender age that, yes, he is warped beyond all possibility of redemption or repair.  Now as fully grown as he'll ever get, Jong-un alternates between his outrageous gangster excess, that he makes the weakest attempts to hide behind communist rhetoric, and his wrathful paranoia, born out of his daddy issues more than any geopolitical ones.  Now, Jong-un is not very funny, which I understand is Park's stock-in-trade; but he is effectively scary and legitimately pitiable.  By presenting him thus, The Interview manages its signal achievement.  It's Downfall Lite.

Well, we had to bring up Hitler sometime, didn't we?  The Interview, after all, can't avoid being compared to The Great Dictator.  Charlie Chaplin's 1940 near-classic is almost as frivolous a thing as it could possibly be—and if you think I'm wrong about that, I'm in agreement with Chaplin himself, who later developed serious reservations about the work.  But if The Interview has a slightly more nuanced take on its subject, The Great Dictator is also stylish and beautiful in how it depicts the fairly-uncontroversial opinion that Hitler was a megalomaniac bent on conquest.  Unfortunately, absolutely nothing in The Interview can be compared to the balletic, hypnotic sequence of Adenoid Hynkel playing with an inflatable globe.

Maddeningly, there is a scene, involving a tank and a pleasant bubblegum pop song, that could have been, if only it had been given room to breathe.  But, like all too much of The Interview, it's sabotaged by Rogen and Goldberg's boring, ungenerous filmmaking.  (Another reason why The End is so much more impressive, and its follow-up something of a confoundment as well as a disappointment, is that The End is seriously better-made.)  Anyway, we need to save that tank and that pop song for the action climax, where neither will wind up working half as well as they would have in the moment of their introduction, and whereupon The Interview can be more readily compared to Hot Shots: Part Deux.  And not entirely favorably on that count, either.

Where The Interview forswears any remaining ambition to being a great film is in its final, necessary swerve into seriousness.  That's a need it also shares with The Great Dictator, again without replicating that film's success, because it can't stay serious for more than a minute without losing interest in its own material.  The interview of the title is naturally the climax of the film's dramatic and satirical arcs—and it's pretty self-evidently the result of writers who wanted a powerful scene, weren't sure how to achieve it, and so gave up quickly and replaced any real emotional heft with big explosions and (to be fair to Rogen and Goldberg's capacity to be creative) soldiers' heads bursting awesomely under the treads of a Soviet MBT.

As for the other edge of The Interview's satire, the one about America fucking up other people's countries for what seems like nothing more than the lulz... well, that is the premise, so it wins points on that count.  But anyone seeking much more will be left wanting.  (Hell, I'm not even sure Bowie and Eno's "I'm Afraid of Americans" is being used ironically.)  Americans are, according to The Interview, equal parts unfathomable stupidity and good intentions.  Hardly the most flattering portrayal, but aside from being eye-rollingly conventional, it's also not even accurate (especially on the second count).  Only about five seconds of this film, when Jong-un is allowed a substantial rhetorical counterattack, does The Interview seem to be remotely aware that America isn't the complete opposite of North Korea's horrorworld.

Yet at the end of the day, I just can't muster up the energy to be terribly concerned with all this: after all, if any regime on this planet of ours could be easily retrofitted into the mold of a cartoonish supervillain organization for our boys to shoot blue lasers at, by God, it would have to be the one that rules the Democratic People's Republic of North Korea.