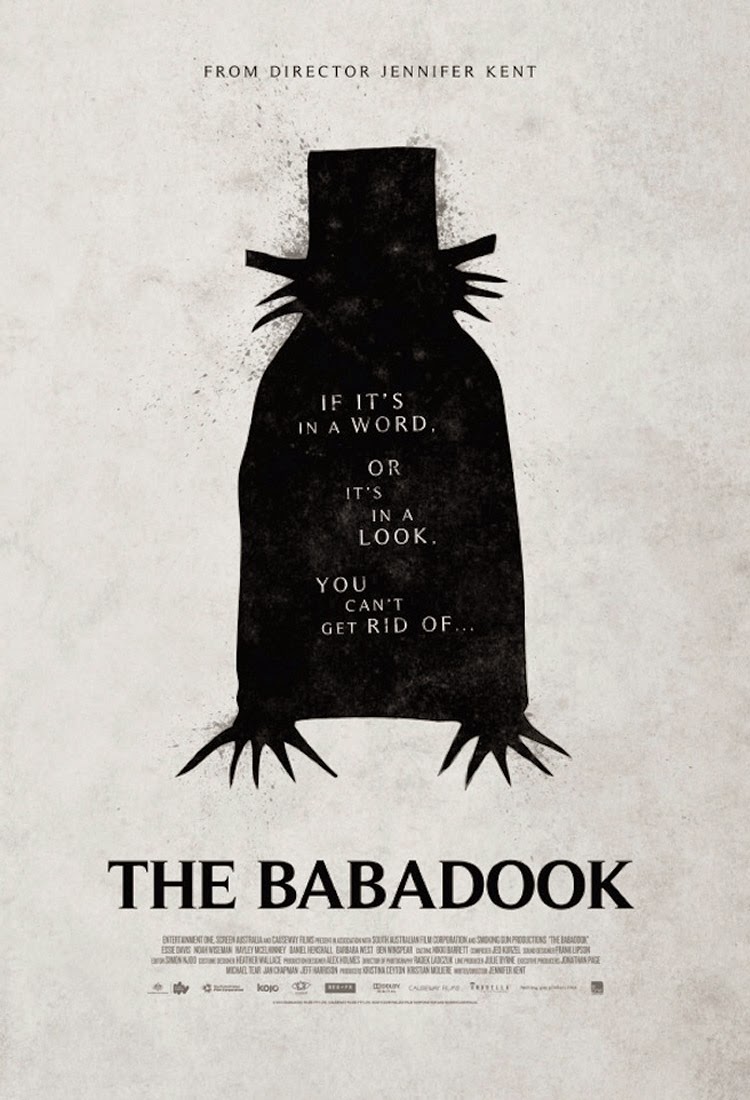 William Friedkin, purveyor of movies everyone else loves so much that I get yelled at for merely liking them, has declared The Babadook the most frightening film he has ever seen.  This sentiment has been echoed, with more or less intensity, from every corner of the world.  And, yes, Babadook is occasionally terrifying.  But there seems to be a confusion between what is frightening and what is harrowing.  Indeed, Babadook is certainly amongst the most deliberately and purposefully unpleasant looks at human existence that 2014 has to offer.  It's not your usual haunting movie: when the promised supernatural evil appears, it's a relief.

That's because, in The Babadook, real life is so much worse.  Six years ago, our hero Amelia was twice laid low by God: first, when her husband died in a car accident while taking her to the hospital to give birth to their child; and again, when she gave birth to their child, our villain.

I'm kidding, but only slightly.  Amelia's son Samuel is probably not truly evil, for he is after all just a child, but taking Babadook at face value, you could easily come to conclusion that this distinction doesn't matter.  "Evil" or not, he is truly, outrageously malign, a sort of life tumor that Amelia once had removed, yet was legally obliged to continue feeding.

Sam has behavioral problems so severe that he gets himself kicked out of school.  He builds ingenious yet insane do-it-yourself weapons like crossbows and catapults, and plays with them in the house.  Yet he also seems entirely incapable of engineering himself so much as a sandwich when he's hungry.  He throws a temper tantrum at the exact right moment to cockblock his mother from (one supposes) the only man who has shown the remotest interest in her in over half a decade—and, notably, he is never seen in the film again.  She can't even take the matter into her own hands.  With Amelia perhaps only thirty seconds away from orgasm, the little bastard comes crashing right into her bed, complaining yet again about the "monsters" in his room.  Oh, and he almost kills his cousin—on her birthday—and when I say "almost kills" I mean "Sam comes within a minute of a degree of breaking her neck by way of intentional homicide."  Admittedly, she was asking for it, but whom would you believe?

The impression you're likely getting is the right one: The Babadook does the job of depicting the difficulties of single parenthood almost too well.  It feels like a whole hour's passed before the first sign of the supernatural appears, but this isn't at all true—it's more like twenty minutes.  In fact, Babadook is short, even shorter than most horror films.  It can't be accused of biding its time, but it packs so much negative emotion into the poisonous vignettes that tell the story of Amelia's awful life, half a feature's length seems to have already elapsed by the time only the first act is done.  I don't mean this as a criticism.

Still, I think I might've bitten my tongue off if I'd had to watch this in the theater instead of in the comfort of my home.  Here, I could say aloud the mean things I was thinking about Sam.  They were much the same words Amelia must constantly suppress.  Because she tries.  My God, how hard she tries for him, in this dystopian society that offers no assistance, yet demands perfection, abhorring that we might ever strike or even raise our voices toward children—let alone dislike them—no matter the level of their disobedience and how much damage they do when they realize you cannot stop them.  (I hate Sam so much.)

For my part, the result was a complete identification with this woman; Essie Davis' unbowed, honestly courageous performance could not have created a more pathetic and pitiable person than poor Amelia.  Thus does Babadook touch upon a very dark place, by basically forcing you into the mindset of a mentally ill and—I doubt this spoils anything—ultimately very abusive parent.  In this dark place, the most terrible things seem inevitable.  Perhaps unfortunately, the film refuses to stay there.

(There is, also, an act of body count padding that I did not care for, and doesn't belong, since Babadook is hardly a body count picture.  It serves only to raise the stakes, and does the exact opposite, because the hand is—in that moment—decisively overplayed.)

Things boil when a children's pop-up book appears mysteriously upon Sam's shelf.  This, of course, is "Mr. Babadook," featuring the creature of the same name, rendered by someone who has definitely seen the work of Stephen Gammell of Scary Stories to Tell in the Dark fame, except that here it is also three-dimensional and therefore even worse.  In classic horror fashion, the book cannot be disposed-of by ordinary means, because it is representative of either a transdimensional eater of children, or the resentment residing in Amelia's heart, or both.  Either way, by the last half hour, Sam's imagined monsters have become quite real enough.

She looks so happy in the book.

There's something to be said for ambiguity, but I think I might've liked the Babadook better if, let's say, his intentions were more sharply-defined than The Thing That Swallows Your Soul... or, on the other hand, that the denouement of his manifestation were staged with somewhat more restraint than a Die Hard sequel.  The attempt to split the difference between The Babadook That Is a Metaphor and The Babadook That Has Telekinesis Maybe isn't an entirely perfect compromise.  (And just how did everyone decide that 2014 would be the year when telekinesis would start representing dissociative states?  It's weird.)

It doesn't quite come together for the same reason as Oculus: the film keeps splitting its own point-of-view.  But that was just a tactical failure in Oculus, which never pretends to inhabit the inside of any one character's perspective; here, it's a far more fundamental error.  Sometimes, Babadook works perfectly as a mindfucking thriller taking place within Amelia's own perceptions; at other times, it's apparently Sam's version of the story, where he gets to explain himself, and in one moment even redeem himself, in a self-consciously Christlike manner that plays superbly on an emotional level, yet also seems insightful far beyond the psychological ken of any child, and particularly this child.  It's thanks to this lack of rigor that I feel like hating Sam is a legitimate choice for the audience to make.  It's not Amelia's warped perception of him after all: her perception, as confirmed by the third person omniscience of our cross-cutting, is indeed mostly accurate.  (Not that I wanted him dead.  Just for Amelia to terminate her parental rights and responsibilities.)

But no matter: the Babadook himself is an exceptionally potent movie monster, and this makes up for just about anything.  Audiovisually, he's a most wondrous terror.  You can't take your eyes off the Babadook, to be sure, but it's not too much to say that the whole movie is bent toward impeccable design, from the highlights of the Babadook and his book, on down to the very smallest details.  Alex Holmes' low-key production design of The Babadook is, in particular, deeply impressive.  He's made a space that can function as a ethereal haunted house, with walls removed and replaced with depthless black; but it is also a house that, in broad daylight, feels real and believably lived-in.  There's a certain penchant amongst (lazy) designers to go all-out when crafting a poor person's house, strewing garbage around and making it appear generally uninhabitable; but Amelia's landlord isn't Roderick Usher, and her abode is not about to sink into the swamp.  There is one detail in particular that was really just beyond perfect: Amelia has two nightstands, each with a lamp on it, but the lamps don't match.  This is because she bought the first lamp, and the second, maybe years down the line, when she could afford it.  What a story those lamps tell.

The Babadook, in the end, sort of loses its own thread; I comprehend the epilogue on a symbolic level, far more than it makes sense on a literal one, and I tend to hold it deeply against any movie when it doesn't work as itself first—especially when it is, despite much storm and thunder, in many ways unsatisfying and anticlimactic.  But my grudge against Kent's otherwise spectacular work isn't a big one at all, because in every other respect, it's either better-than-adequate—or outright great.  I'll say this much: this is a woman we need to watch out for.