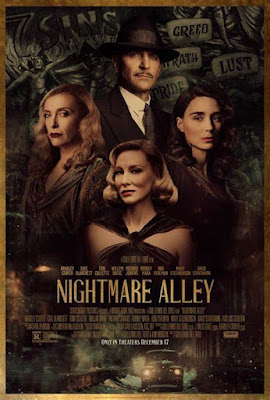 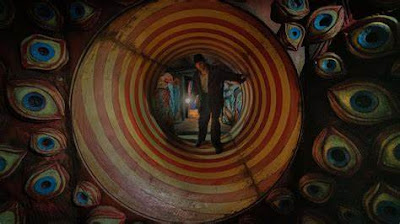 The list of things about Guillermo del Toro's 2021 film, Nightmare Alley, that justify Guillermo del Toro remaking the 1947 film noir, Nightmare Alley, is a very small one.  The first possibility, that it's a new adaptation of the novel, well, you can forget that.  Otherwise, then: it's more violent; it's got swears (combined, these two things net it del Toro's preferred R rating, often in ways that feel inorganic to the scenario and annoyingly try-hard); it pronounces the word "tarot" correctly; it's, uh, in color.  Okay, there's one big thing that wouldn't justify it all by itself, but is an objective and substantial fix to the original: in the role of a psychiatrist to the wealthy elite, it casts a 52 year old woman, Cate Blanchett, who looks very much like she could be in the prime of her career, rather than a 27 year old like Kate Walker, who plausibly looks like she might not have quite graduated high school, let alone medical school.
I wouldn't like you to get the wrong idea about my feelings for Nightmare Alley '47, then: it's not some unimpeachable masterpiece.  It's just a very good movie with an especially caustic and hopeless attitude, even for a noir.  There are a lot of things in it that could stand improvement, and I honestly had some hope that del Toro was the guy for it.  For starters, it's at least possible to quibble with its essence as a Tyrone Power vanity project (or anti-vanity project), designed to stain his image a bit and demonstrate his range, and while Power is rather good it's not that hard to imagine someone doing Nightmare Alley's perpetually-falling antihero better.  Once past Joan Blondell, it wouldn't be difficult at all to imagine better performances in the secondary cast, and del Toro's lined up a murderer's row of actors to fill out the whole cast here.  That bifurcated plot is a little cumbersome, too, and could stand some smoothing out.  Most importantly, it's not all that interesting a film visually, so even the most slavish remake need not have been just a colorized version of a black-and-white classic—especially given that an eye for expressionistic, phantasmagoric color is del Toro's best asset, and that's something a movie set mostly at a carnival (and otherwise in the Art Deco spaces of the pre-war elite) ought to have benefited from.
So the most remarkable thing about del Toro's film is how badly this room for improvement gets squandered.  It looks more interesting, that's worth mentioning; there's a sumptuousness to Tamara Deverell's production design that does full justice to the environments, particularly the carnival that's now a sprawling, real place, rather than three people who run a mentalist show plus a chick who electrocutes herself.  Likewise, Del Toro at least has ideas for doing this in color (including pilfering imagery straight from himself, most egregiously Crimson Peak, still I'm pretty sure his best movie), though these ideas pretty much never go beyond the mood of a single shot—a scene if you're lucky—and, with disappointing frequency, they don't go beyond del Toro's instinct that if he didn't add some color accent to break up Dan Lausten's cinematography, then this Nightmare Alley might've wound up just as monochrome as the original.  Still, that glossy, steely look at least feels appropriate to the "Art Deco spaces of the pre-war elite" half.  But these are some thin reeds.  If Nightmare Alley '21 is remembered at all, it'll be as the time that Guillermo del Toro remade a movie because in the original, the geek didn't bite the head off the chicken onscreen.
So to those who don't know what the hell I'm talking about, yet somehow haven't clicked off after I spent 600 words implicitly assuming you did, Nightmare Alley is the tale of Stan Carlisle (Bradley Cooper), whom we meet on this go-'round as he burns down a house with a corpse in it, escaping into the night only to wind up at the end of the line, where he finds a traveling carnival.  He wanders into a geek show and is disgusted, but he's also broke, so he loiters around looking miserable till the boss (Willem Dafoe) gives him a job, whereupon he falls in with the mentalist Zeena (Toni Collette) and her wastrel alcoholic husband Pete (David Strathairn), and while he fools around with Zeena, he learns the secrets of the great stage act they'd put on in their bygone and better years.  Now armed with a shockingly (almost unbelievably) effective code system for fooling an audience into believing he can read minds and contact the spirits, he escapes the carnival's gravity, taking along with him his other, younger girlfriend, Molly (Rooney Mara).  With her help, he puts Zeena and Pete's stolen secrets to work, but this time the target isn't country rubes, but high society.  It's in his capacity as "the Great Stanton," then, that he makes the acquaintance of psychiatrist Lilith Ritter (Blanchett), who visits a show with the mission of testing his powers on behalf of a skeptical patient—she'd just as soon embarrass him in front of his audience—but when he handles her challenge so adeptly that he actually manages to publicly humiliate her, it boosts his profile enough to begin doing "private consultations."  At first, the scam seems to be helpful to grieving mothers and fathers, that sort of thing; but it becomes far more dangerous once Stan ropes Lilith into his grift, enlisting her to feed him confidential information on the kind of e-ticket sucker (Richard Jenkins) who could make him rich.  This, obviously, will turn out to have been a mistake on Stan's part. 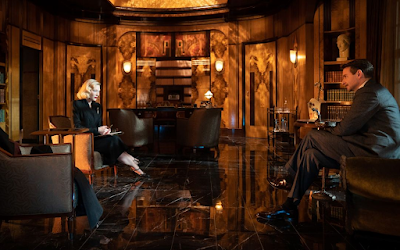