Back in the habit 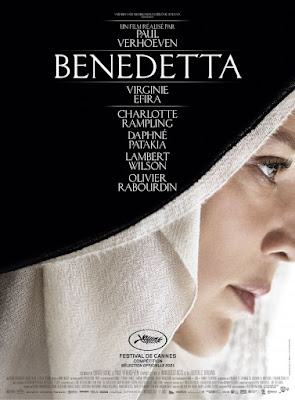 BENEDETTA
2021
Directed by Paul Verhoeven
Written by David Birke, Pascal Bonitzer, and Paul Verhoeven (based on the book Immodest Acts: The Life of a Lesbian Nun In Renaissance Italy by Judith C. Brown)
Spoilers: moderate 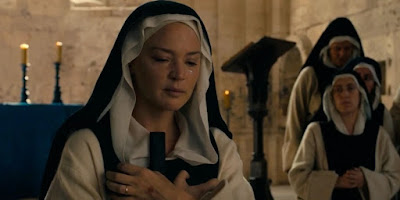 Or maybe the gearshifting in Efira's performance was the idea, since Benedetta wants to be ambiguous about whether Benedetta is faking it altogether—it almost overplays its hand in this regard with one of its best small scenes early on, where Felicita remarks dryly that when "God" put the wounds in her hands and side He forgot to put the wounds on her head, and in the next scene there's a broken cup and a lot of cranial incisions—but it's at odds with the fact that we do see Benedetta's visions, which means either that the ambiguity is heightened even further (Benedetta is having hallucinations, but can readily weaponize them for her own political schemes), or that Verhoeven wasn't going to make a movie about crazy nuns and not put in the crazy dream imagery, especially as it's almost the only crazy imagery in his film, and these are the only times it doesn't feel at a slight remove from its subject.  It is, anyway, remarkably sedate otherwise, clear and well-told (even when the screenplay is chasing blind alleys like an ethnic Jewish nun who arrives to remind us that anti-Semitism existed in 17th century Italy, which might be more useful if she didn't come from nowhere and return to nowhere the instant her scene was done), but mostly a collection of spare realist compositions and stately editing, altogether perhaps a little too relaxed, given content that includes self-mutilation, softcore fucking, a plague, and a suicide.  In any case, Rampling is probably the standout, an old woman who actually has dedicated her life to this pursuit, not without long-running doubts, by now worn-out by a lifetime of denial and the disappointment of even her meagerest ambitions, and for a while, purposefully or not, it's very hard not to take her side until you realize "her side" means putting the lesbians to death, and even then, by this point, it's become blood for blood.
Which is where the movie gains its most traction, while at the same time becoming more conventional.  (It flirts early on with rather more dangerous and nervy material: there's initially the indication of a monstrous sexual cruelty in Benedetta that essentially vanishes by the end of the first act, and if the screenplay is even aware of the fraughtness of a teenage girl who's spent her whole life getting raped by her family immediately falling into a sexual relationship with a domineering and possibly insane woman, then it doesn't acknowledge it.)  Of course, this is a historical martyrdom, and its violence is appropriately condemned as a ridiculous waste.  The basic story itself can't help but be moving and upsetting, and I appreciate that it's lensed through Benedetta's own experience rather than the anachronistic viewpoint of people in the 21st century, so that her Christianity has effectively merged with her sexuality in ways that would essentially have made her the prophet of her own new religion, or at least one of the more interesting Protestant thinkers.  In the last possible moment, a character makes a decision that re-complicates the whole movie—not enough to completely reframe it, but to reveal something about themselves that removes some questions, but opens up bigger ones.  I've unfortunately done little but harp on its flaws, but it's a very fine film Verhoeven's made here—very well-acted even if I might have shuffled the cast around; able to wring an attachment to its central romance from its porno interludes, that it probably couldn't have achieved with its interiored, enigmatic protagonist otherwise; it's often wryly funny; it punches up the historical (anti-)climax of Carlini's trial considerably; and the truest miracle of Benedetta is that it's 131 minutes long but I thought it was under two hours—so if it's maybe not as memorable as it should be, and Verhoeven seems to have been willing himself into a more reverent place for it (which isn't even the wrong decision, even if it maybe blunts his instincts), it's still the furthest thing from bad.
Score: 7/10
*And for all that I condescend, I probably should disclose that in my theater there were two walkouts.  And thank God, because these jokers very clearly did not know what movie they were watching, so they spent nearly thirty minutes yammering at each other before they left.  Which means that even during a screening of a foreign arthouse movie, the theatrical experience still fucking sucks.
Posted by Hunter Allen at 10:17 PM