Census Bloodbath: Sure burned my beans bad on that one 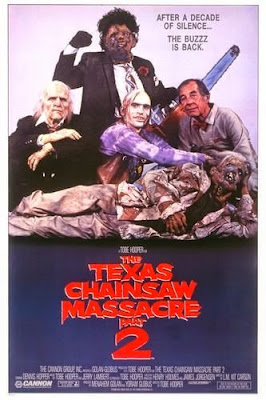 THE TEXAS CHAINSAW MASSACRE PART 2
The Eighth (oh God) Annual Great October Switcheroo!  Once again, we're crossing over with the wonderful Brennan Klein of Popcorn Culture and sometimes Alternate Ending, and I'm doing some of the 80s slashers he's catalogued as part of his Census Bloodbath project, while he's doing some of the old-timey sci-fi I've been hoarding as part of my own Cardboard Science archive.  This year, he finally gave me three pieces of the slasher genre's major arcana, such as I've been very subtly and surreptitiously hinting that I'd like to do this whole time; in return, I accidentally gave him three pieces of indecent crap.  Oops!  (But, seriously, apologies.)
1986
Directed by Tobe Hooper
Written by L.M. Kit Carson
Spoiler alert: moderate 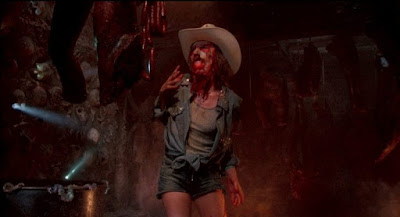 I suppose it makes a kind of sense that the maker of one of horror's grimmest and grisliest motion pictures would, with its twelve-years-later sequel, make one of horror's most absurd.  I don't necessarily hold with the common claim that Part 2 is actually a comedy; though, obviously, I can see where you're coming from.  Here's something that stands out to me: not counting Carpenter's contribution to Halloween II, and not counting Wes Craven much later, Tobe Hooper is (I'm pretty sure) the only director of a major slasher franchise's first entry to return for a first sequel.  There's something to that, I'd hazard: maybe even because they're so distinct, only the man who did make The Texas Chain Massacre would go out of his way to make The Texas Chainsaw Massacre Part 2 the way he did.  I expect he signed on to this Cannon Group cash-grab largely to rehabilitate a failing career (it didn't work), but there's a modicum of wisdom in Hooper's recognition that the dour nihilism of his breakthrough hit could only have met diminished returns.  So, yeah, it makes sense. Chainsaw 2 isn't even really any less dark, just not heavy, and when it is dark, it's in ways calculated not to be taken seriously.  It's dark like a Tim Burton movie's dark, albeit gnarlier, and more intentionally annoying.
A word, then, on 1974's Texas Chainsaw Massacre: needless to say, it's a film that's earned its extreme reputation, and while it's not necessarily a film I find "scary" (particularly if by "scary" you mean that it bothers me after it's over), that kind of scary isn't its goal: Chainsaw '74 is viscerally upsetting, the kind of film that makes you quiver, less as a psychological reaction than a physical one.  And it does this by presenting its horror with a queasy matter-of-factness; it's hellaciously well-shot by Daniel Pearl with lumps of grain and unstable, metastasizing darkness, and with an eye for the heat and haze and the permeable boundary between nature and civilization in a decaying rural Texas, but, altogether, he and Hooper sought something you could almost describe as an anti-aesthetic.  (That first kill...)  It feels real, is what it feels like, and truly dangerous, or at least it does up till a finale that feels like they somewhat wussed out, and even then, the final shots are iconic.
But twelve years later, there was this thing, which trades in Hooper's anti-aesthetic for lurid, well-photographed sleaze, for elaborate blood and elaborate gore and, somehow more importantly, elaborate set design, all of it presented at a downright unreasonable level of theatrical flair.  The scariest thing about Chainsaw 2?  Thanks to the "coup" of casting Dennis Hopper—a more-or-less real actor!—as the man obsessed with vengeance against the cannibals, which in practice meant the film's co-lead operates in nearly a complete parallel reality to every other person in it, I was starting to get real worried that they weren't going to give me the chainsaw duel between Hopper and Leatherface that they'd clearly promised, especially as Hopper spends most of the third act in bolted-on insert shots sawing through roughly fifty individually-unimportant support beams while the villains fail to do literally anything about it but yammer. 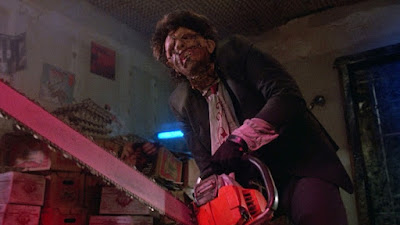 It's a very different take on the basic idea of a cannibalistic family of garden tool worshippers, as you can see.  That's a creditable thing.  It's not, you know, actually good.  But there is something magnetic about its very excess—it feels like every idea for the movie ultimately wound up in the movie—and I heartily acknowledge that its fans aren't wrong to be drawn to it.  The first film's text crawl uses the word "macabre" because it had to use something, even if words were bound to fail; Chainsaw 2 embraces the connotations of that word, "macabre," as something icky but also sort of, well, fun, starting with its own text crawl and an opening credits sequence that decide a "chain saw massacre" would be best accompanied by the score from a 60s Gothic horror movie, only as arranged for a Casio keyboard.
The problem?  The movie's plainly having more fun than its viewer.  At least this viewer: I scowled my way through a lot of it.  One of my notes from its first hour reads "the only things I like about this are the heroine's haircut and the fact she wears daisy dukes."  And, ahem, even that's only up to a point.  That first hour runs out my patience for a movie that already clocks in at 18 minutes longer than its predecessor, and Chainsaw '74's horror-neorealism already lent itself to a certain amount of padding.  Nevertheless, Chainsaw 2 fully revives before the end.  I don't know if I condone it—but even that's something of a testament to its basic effectiveness as a piece of gonzo Goddamn nonsense. 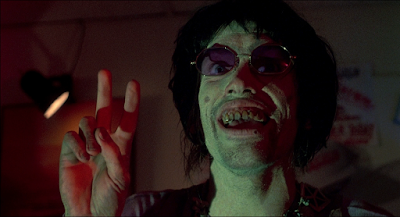 Well, as those credits go, we're introduced to the only characters, ironically, that we can rightfully deem "meat."  So let's meet Buzz (Barry Kinyon) and Rick the Prick (Chris Douridas), as he identifies himself.  The duo are on a little mayhem spree across some stretch of backwater Texas, apparently during the wintertime or perhaps Buzz, as a dedicated preppy, refuses to take off his pastel yellow sweater under any circumstances.  They call up their "favorite" radio show DJ, "Stretch" Brock (Caroline Williams), and give her a hard, sexist time until they meet their fate on a secluded bridge.  That's where the movie kicks into the highest possible gear and more-or-less stays there, as Leatherface (Bill Johnson) engages in Mad Maxian car warfare with the two dickhead teens, who for cinematic reasons make sure to carefully maintain pace and position with an attacking truck driving in reverse.  This pays off anyhow with the film's best grue effect, courtesy Tom Savini, namely a chainsaw-mediated buzzcut for poor Buzz.  It's fucking metal.  For better and worse, this whole movie's pretty metal.
It turns out, however, that Stretch has kept her recording of the call.  Her decent-hearted redneck colleague L.G. (Lou Perryman) finds this pointless, but a news-of-the-weird piece about the murder catches her attention, detailing the years-long quest of a certain former Texas Ranger who dresses like M.F. Fatherton, one Lt. "Lefty" Enright (that's Hopper), to uncover the truth about chain saw massacres in his great state.  Driven by his personal connection to the case, he's the uncle (or, according to later dialogue in this frequently-sloppy-to-the-point-of-being-unparsable film, brother?) of two of the victims of the massacre we saw in Chainsaw '74, and he's been pursuing the killers ever since, alluding to willful cover-ups and what must be dozens or hundreds of victims between then and now.  Stretch reaches out, but while he's reluctant to involve a young woman in his vendetta, he comes around eventually (that is, offscreen and in the narrative's substantial negative space), albeit with plans he doesn't fully share with his new partner.  Suffice it to say, the Sawyer family—apparently that's their name—comes to them.
It's not a comedy, I said, but there's a cheekiness to it, starting with the Breakfast Club poster and remaining incipient in the film, from the long pig chili that wins first place in a chili competition, much to the delight of our Cook (Jim Siedow, the only returning cast member, and with so much more dialogue this time that I realized, startled, that if Wallace Shawn and Tommy Lee Jones had a kid, it'd be him), down to the scene where Lefty buys a big-ass chainsaw at a roadside chainsaw store, then buys two little back-up chainsaws for dual-wielding purposes.  Chainsaw Massacre Part 2 is, like, already the video game adaptation of itself. 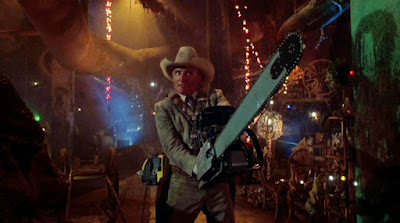