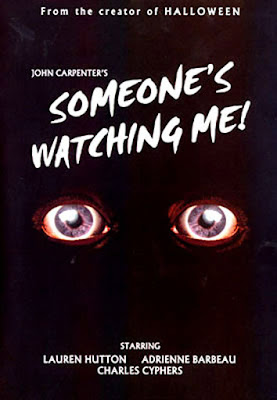 A thriller just tiny enough to fit inside one of those small cathode ray boxes we used to call "televisions." 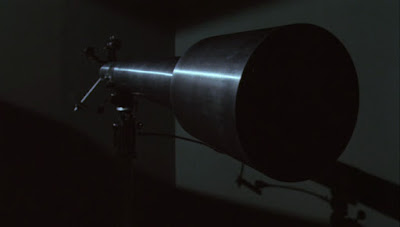 For the first five years of his career, John Carpenter flipped back and forth across the frontier between theatrical film and television, and after the marginal success of Assault on Precinct 13, he subsequently worked on no fewer than four movies made for the small screen.  The last, broadcast in 1979, was Elvis, which he directed, and which therefore we'll have to deal with when it comes, despite its potentially punishing (and deeply uncharacteristic) three-hour running time.  The first, however, was Zuma Beach, an oceanside dramedy starring Three's Company's Suzanne Sommers, and the third was Better Late Than Never, which, according to the movie's spare synopsis on IMDB, must have formed the basis for the retirement home revolt in Cloud Atlas.  Zuma Beach and Better Late Than Never amount to ephemera.  Carpenter didn't direct either; he was heavily rewritten on both; and I think we can say we're done with them forever.

But then there's his second TV movie, which Carpenter wrote alone and which he directed.  That means our subject for today must be Someone's Watching Me!—and, yes, the exclamation point is integral to the title—which aired on NBC the night of November 29, 1978.

Now, Halloween came out in 1978.  And as you might very readily guess, it was released in the last week of October 1978, a month prior to Watching.  By rights, then, I should be doing Halloween right now.  And I suppose I would even prefer to, but two facts militate strongly against that course of action: the first is that Watching was actually made before Halloween, which makes it a precursor in terms of Carpenter's development as a filmmaker; the second is that, obnoxiously, I haven't yet been able to actually get ahold of Carpenter's single most popular and easily-obtainable film.  So here's the rarely-seen TV movie Netflix sent me instead. 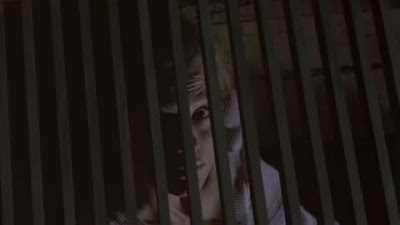 And, when you consider that they lost their only copy of Douglas Fairbanks' The Gaucho in the process of trying to deliver it to me, screwing up my other ongoing retrospective, you can guess I'm kind of annoyed.  Please take my frivolous white person complaints seriously.

Someone's Watching Me! is the story of Leigh Michaels, a live television director recently transplanted to L.A. from New York as a result of ambiguous man trouble, although we learn enough to guess that some manner of sexual harassment figured prominently in her old job.  Still, she finds new work rapidly enough, and meets her coworkers, a pleasant and unthreatening lesbian, Sophie, and a man, who is lecherous and awful.  She meets other men, and they, likewise, are lecherous and awful.  Then she starts getting the phone calls.  They are, predictably, lecherous and awful, but she believes—at first—that they can be safely ignored.

We're well ahead of her on this, because we saw the opening shot of the movie: Carpenter's grotesquely-exaggerated image of a giant telescope, trained directly upon the windows of Leigh's corner apartment, a highrise glasshouse, its promise of privacy trivially breached by the long lens of her secret observer.  And we know, long before she does, that her house has been broken into; that it's been bugged; and that the letters and free gifts she's getting from a travel company called "Excursions Unlimited" are all part of an increasingly-terrifying game being played by a man who is every De Palmian surveillance hero turned inside out.  At times, she seems to turn the tables—literally so, when through the power of terrible blocking she manages to faint and drop her own living room table on her chest, unmooring her stalker's listening device.  But more typically, her watcher is at least one step ahead of her, a criminal mastermind devoted to only one goal: the complete destruction of her sanity, and ultimately, her life.  A news report tuned to the Plot Station mentions early on a woman's suicide—and we can probably assume there's some kind of connection here.

Watching and Halloween make an interesting pair, since the two are essentially Bob Clark's Black Christmas disaggregated: Halloween, conceived by Carpenter and Clark as a possible Christmas sequel, takes on the task of stabbing young people; meanwhile Watching, made quickly while Halloween was in development, represents Christmas' phone harassment plot writ large.  And all three films, of course, are deeply concerned with the men who hate women.

In the early going, Watching makes a game attempt to establish a misogynist horrorworld—not too distinct from 1978 as it existed, sadly—where simply being a woman turns every day into a gauntlet.  Leigh must pass the challenge of the entitled assholes who surround her—each lesser versions of our villain—in order to get anything done at all, whether it be a day's work or simply finishing a glass of wine.  However, to soften the blow, Carpenter introduces a male co-lead, a philosophy professor, whose chief qualification for Leigh's attention is that he didn't make a pass at her.  It works well enough to begin with, but when Watching introduces the professor's friend, a cop, it makes a hash of its apparent theme.  At this juncture, though Watching makes its half-hearted gestures, what we see is less a system that doesn't care about women than it is a system that is just kind of stupid and ineffective, yet nonetheless able to lavish extraordinary resources on solving something that only passingly resembles an actual crime.  (Indeed, if only various constitutional amendments were written differently, Leigh's problem would be solved immediately.  That I happen to agree with Watching's accidental thesis, however, doesn't make it less unintentional.)  Rather than any general feminist statement, then, Watching retrenches quickly to being about the one man who is evil, but—fortunately for the plot—is too smart to be snared by the men who are good.

On this count, it remains a solid game of cat-and-mouse.  It is, however, very far from flawless: even adjusting for her own limited perspective, initially Leigh is just insultingly slow on the uptake.  In a very early scene, the stalker's phone calls ought to have completely tipped his hand.  Not once but twice, he rings Leigh literal seconds after she receives a package from "Excursions Unlimited," and, under the guise of a company functionary, he discusses the package in a way that makes it clear he knows she's brought it into her home.  Also, one of the gifts is a Goddamned telescope.  Leigh eventually figures everything out, and at this point becomes a suitably active protagonist (albeit one prone to making all kinds of mistakes), fighting back against her persecutor until such time as the confrontation inevitably becomes physical.  You get the impression that the middle part engages in wheel-spinning because it has to, in order to fill up a two hour programming block; a svelter version of Watching, weighing in at 70-80 minutes, rather than 96, might have been a minor TV miracle.  The version we have is not.

Carpenter's facility with character keeps it from ever being a slog, however—Leigh is a likeable enough heroine, and Lauren Hutton maybe better than she needed to be in a surprisingly demanding role.  Leigh's chief characteristic is a penchant for talking to herself in a way that, depending upon the moment, varies between incredibly charming and marginally grating.  But mostly she seems kind of damaged, a little legitimately psychologically-fragmented.  And she gets worse, but the heroically intriguing part is that the pressure of her situation seems to actually push her back together.

On the other hand, there's Adrienne Barbeau, the future Mrs. Carpenter (and future co-ruiner of his relationship with Halloween producer Debra Hill).  As Sophie, Barbeau is vivacious and fun in that overly broad, sitcom-inflected way.  Her major contribution is as a scene partner for Hutton and having a body that can be murdered; however, it would be too much to say she actively undermines the movie.  (There are also the two men, Paul Winkless as the philsopher-boyfriend and Charles Cyphers as some kind of LAPD chieftain.  They are basically fine, worth mentioning only because with this, Cyphers, who also featured in Precinct 13, becomes a genuine Carpenter regular—and also because "Charles Cyphers" is maybe the coolest name in Hollywood history, right up there with "Rex Reason.")

As a movie, Watching is better than you might expect on a TV budget—there's a lot of Rear Window in here, naturally, as well as a neat quote from Vertigo, a push-pull effect that Carpenter later expressed a slight disappointment with, but works in the moment every bit as well as it should.  Carpenter's eye for framing is likewise developing.  Obviously, Watching could not be filmed in Carpenter's usual CinemaScope, yet the DVD version I saw is still offered in ordinary widescreen, and appears for all the world to have been composed for it, which in itself is a little surprising, considering it must have been broadcast in full-frame.

If Watching has one signature image, it must be Leigh's quick-witted escape into a convenient grate in the floor of the boiler room, the grating obscuring all but one eye as she gazes upward in terror at her stalker—who by the very grace of God does not look down when he drops a lit cigarette through the grille, falling inches in front of her face.  (If Watching has two signature images, the other one is that vertiginous look down the side of the highrise in the climax—shot on location, it is our first and very shocking departure from Leigh's stagebound apartment.)  There's an intermittent energy to Watching that signals a promising filmmaker on the rise; though it is in no way as well-made as Precinct 13, it is better made than you'd possibly expect for the filler between advertisements.  It still has its hiccups, of course—a lot of them, in fact, from the lulls in the action that Carpenter doesn't really know what to do with all the way to its preposterously misjudged use of POV camerawork in a throwaway scene that has no real business even being in the movie at all.

You can see the man learning, and that's enough to make watching Watching interesting; it is, on its merits, merely okay.  But okay is okay, and there's nothing really wrong with okay, even if my odds of ever actually revisiting this once-missing link in the great director's filmography are, honestly, somewhat low.