I like these little calm moments before the storm 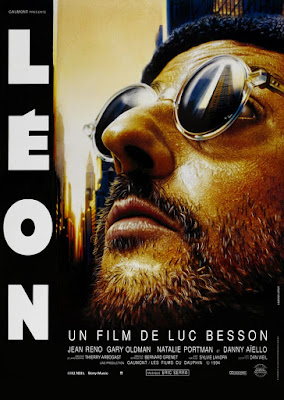 Would you believe that a Luc Besson movie has serious problems?  It's true!

Despite a career spanning from the mid-1980s till the present day, and despite a body of work ranging from—well, hardly ranging at all, when you look at it—Luc Besson's reputation as a director rests on just three films, made between 1990 and 1997.  On one side, you have Nikita; on the other, you have The Fifth Element; and right in the middle, there is Leon, released in America in 1994 as The Professional  (which I slightly prefer as a title, but nevermind).  Having somehow avoided seeing this rather popular movie for two straight decades, I finally got the chance to screen it today.  For the record, this is a review of the extended edition of the film, which restores material cut for the U.S. theatrical release.  The short version, anyway, is that The Fifth Element's position as my favorite Besson film has not been very seriously threatened.

Of course, given that The Fifth Element is not just one of the best 50 or 60 films made in its decade, but also one of a mere three indispensable post-Star Wars space operas, this still leaves a lot of room for Leon to be good.  Let us mince no further words, and say that even though it has its charms, Leon is not very good.  Undeniably, it's a real mess—"mess" being a word I have come to closely associate with Luc Besson's storytelling style—but it is also undeniable that it is a rather well-made mess, and, somehow, it's almost a satisfying mess.  Leon is a mess which, to an astonishing degree, proves very nearly capable of cleaning itself.

Leon deals with the life of an assassin—but, then, all we're doing is repeating ourselves now, since we've already established that it's a Luc Besson film, and once you ignore the rounding errors, that's what all of them are about.  (Sometimes "assassin" may need to be downgraded to "murderer," "soldier," or "cop," but these are distinctions without much difference in Le Monde de Besson.)

The hero of the title, our man Leon, is one of New York City's top men in his field, and we find him in the midst of an ordinary workday, enforcing the will of one criminal kingpin against another.  The reasons don't really matter—for Leon is, as you might have guessed, a professional.  What does matter is that Leon is supernaturally good at his job.  He strikes from shadows.  He walks through walls.  And he is unseen, until he is ready for you to see him.

Despite these rarefied skills, Leon lives simply.  (His only companion is a potted plant.)  However, he does make the acquaintance of the drug-dealer next door's young daughter, a certain Mathilda.  You sense that he is concerned—in a very distant way—about the bruises on her face, and the sadness that seems to define her.  Still, he surely would have ignored this girl's quiet implosion—having long since imploded himself—except that one day, her family is killed while he listens, and—against all his better judgment—he lets her in, and saves her life.  She soon learns of Leon's vocation, and with that we have the makings of an action film on our hands.

Most of what happens next you can predict from the premise: Mathilda, driven by vengeance, bullies her way into something like an apprenticeship; Leon, whose paternal instincts have been awakened, is torn between the desire to protect her from making the same choices he once did, and which led him to a life of quiet desperation, and the desire to give her exactly what she wants—the men who killed her family dead.  As this is a Luc Besson film, you win no points for correctly guessing which path Leon ultimately chooses, though you may need to look to samurai cinema to see honor better satisfied than in the final climax of Leon.

There is, within this material, a great film—even an amazing film—and I don't think anyone involved would have even needed to try very hard, to have actually made it into a great film.  That's how it comes as something of an unpleasant surprise that Leon is not that film.  But why should we be shocked?  Besson has rarely failed to seize upon the right scenario; his perennial problem has always been to find the right details necessary to fill it out into a completely functional story.

The first hint there's something awry with Leon is—and this is very surprising—Gary Oldman, as the corrupt DEA agent responsible for murdering Mathilda's family.  Perhaps it suffices to say that when Oldman teamed up with Besson again for The Fifth Element, in which Oldman starred as a trillionaire science villain named Jean-Baptiste Emmanuel Zorg who has made a literal deal with a literal Space Satan, he toned it down.

Meanwhile, as far as Leon goes, he never even arrives in the same jurisdiction as "conventionally good"—even though you can certainly recognize that this is something like the point.  It's clear enough that Oldman himself is having a blast, intimately sniffing his scene partners before he chews their faces off.  And, indeed, Oldman always eventually finds some way to slip across the border between the merely bad and the marvelously bad.   Yet it's also always a very tough sit, while you wait for him to finally get there.  Thus Leon gives you long, long moments to grapple with the fact that what you're watching is, essentially, a geek show, and not an altogether successful one.

With Oldman around, biting the heads off live kittens and masturbating directly onto the camera lens, the less-than-perfect performance from Leon's co-lead is, in comparison, completely unremarkable—but we have to deal with Natalie Portman anyway.  She was given the intractable problem of the film's most difficult role, Mathilda.  She's often praised for the performance, and, yes, I do see the sense in praising her.  She bravely tries; she bravely fails; and you never blame her.  Mathilda, you see, is very close to a disaster on the page, saddled with smeary globs of "precocious" dialogue that only emphasize the clumsiness and condescension of a script that won't trust its audience to understand her motivations without having them described, in fine-grained detail and at least half-a-dozen times. Of course, Mathilda has an infamous subplot that's even worse, and this subplot is forced into the proceedings with all the grace of—well—a 13 year old aggressively asking you for sex.

That there's a certain coherence to Mathilda is something we probably can't just outright dismiss; Portman deserves credit, and maybe Besson does, too, for writing a film that does something other than blithely ignore pre-adult sexual desire, which is certainly a thing that exists, even when there are very solid enjoyability-based reasons for it not to exist in fun action movies.  But—naturally, given Besson's crushingly obvious idiom—everything that could have been brittle and bittersweet about Mathilda's confused affections for Leon descends very rapidly into bracing lewdness.  This becomes Leon's default mode for dealing with Mathilda's overtures—except in the choicest moments (notably, Mathilda's rendition of "Like a Virgin"), when it veers drunkenly into the realm of the genuinely upsetting.  At the end of day, whether Leon is or is not a naturalistic exploration of a pubescent girl's fucked-up sexual awakening, it necessarily prompts one very blunt question about the material:  "Is this something you actually want to watch?", and the answer is "Not especially."  This is especially the case in the context of Leon's very slimiest scenes, where it plays like a bodice-ripper written for pedophiles.

This is over and above the more prosaic infirmities of Leon's script, like the dearth of good action that constitutes the middle of this action movie, or the scenes that simply repeat previous scenes' points to diminished returns (like the recapitulation of Mathilda's paintball surprise).  And then there's Leon's illiteracy, which stretches credulity, while amounting to practically nothing anyway.  (You may also question how Leon got people to open their doors before he had a pathetic widdle girl around to pretend to be scared—although this is, I admit, a very minor point.)

Luckily, we do have somebody holding it more-or-less together, and that somebody is Jean Reno, whose slow reawakening to life is permitted to bloom more subtly than Mathilda's own adolescent eruptions.  You like Leon, whose code—"no women, no kids"—at least theoretically makes him better than his enemies, and you can sense a sort of basic decency within him.  Outside of scenes like the one where he feeds Mathilda champagne, and Reno evidently saw little point in struggling against such insuperable creepiness, Leon remains a protagonist worth following—and this becomes very important, when the sluggish second act starts severely testing your patience.  If anything saves this film, it must be Reno—along with a pretty dynamite ending that, without Reno's performance, could not possibly be as resonant as it is.

On the technical front, Leon must be counted a well-executed film, once you account for its obvious shortcomings as a narrative.  But a handsomely-made Luc Besson joint is no real accomplishment.  For as long as he's directed and produced movies for American audiences, Besson has been a purveyor of slick, glossy action schlock that remains one step above hackery, while offering a certain illusion of depth.  Leon was the film to define the rule—but, from our standpoint here in the Future, there's not much at all worth praising about that.