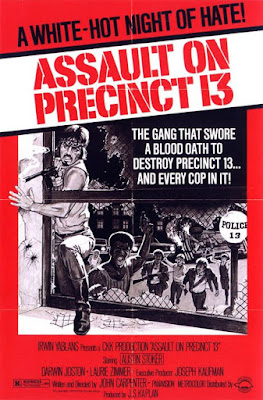 Abstract art, a vague politicizing impulse, and lo-fi action all converge in John Carpenter's Assault on Precinct 13, and I mean that in a highly complimentary way.

Following his departure from USC Film School and the theatrical release of the expanded version of his not-very-good graduate thesis, John Carpenter was confronted with the vastly more difficult prospect of making a real movie.  So he made Assault on Precinct 13 instead.

Now, Precinct 13 is like a real movie, insofar as (whatever it is) it's certainly a very good movie.  Yet there's an unmistakable spareness to it that makes it seem more like the idea of a real movie than a completely finished one.  In essence, what Carpenter creates in Precinct 13 is a space that's still half-empty.  If its viewer wants to get the most out it, then the viewer's got to meet its creator halfway.  But the strange thing about Precinct 13—the miraculous thing, even—is that its forced minimalism plays almost entirely in its favor, turning what amounts to a relatively standard siege movie into a wholly unique, almost magical action-exploitation experience.

But listen to me say, "standard siege movie"—like there was such a thing, before Carpenter more-or-less invented the single-location survival-actioner with this very picture.  Now, obviously, you can trace the genre's roots at least back to Night of the Living Dead, almost a decade earlier.  (If you were so disposed, you could trace it back even further, through the cinematic treatments of the last stand at the Alamo, along with at least one movie about the Battle of Rorke's Drift.)  Precinct 13 represents a different register, however, and so far as I'm aware, it is the first of its specific kind: the siege movie that is also good fun.  Drawing heavily upon Dead's claustrophobia and tension, but abandoning both its high-pitched paranoia and the bitterest dregs of its gut-wrenching cynicism, Precinct 13's brand of siege movie is easily distinguished from the gross, nihilistic version innovated by Dead and codified a few years later by Straw Dogs.  To this day, like the children of Seth and Cain, we have two very distinct breeds of siege movie.  One was built for action, the other for horror (and, often, politics), and you can never know exactly which one you're going to get—a descendant of Carpenter, or a descendant of Peckinpah.

Don't look here for a dour contemplation of the beast within the soul of man.  In Precinct 13, Carpenter draws upon an older, purer source, where the violence men do was taken as as given, and considered inherently morally neutral: the Western.  Famously, Precinct 13 was the result of Carpenter's realization that even a cheap Western was too rich for his blood.  Thus his first professional feature became a loose, modernized remake of his favorite Western, Howard Hawks' 1959 slow-burn shoot-'em-up, Rio Bravo.

To Carpenter's credit, this is not even the least bit apparent from a back-to-back comparison.  The similarities between the films begin and end with the fact that both involve 1)a jail, 2)guns, 3)cigarettes, and 4)a literally explosive finale.  In other words, if Precinct 13 is a remake of Rio Bravo, so are about two or three thousand other movies.

And maybe they are, after all.  Rio Bravo is pretty swell.

But there's no mistaking Precinct 13's worshipful attempt to capture the Hawksian essence.  Even if the details are completely different, Carpenter's neo-Western evokes Bravo in one absolutely crucial way: fundamentally, each is nothing more and nothing less than a machine built for exploring its premise in the most interesting way its director could achieve; and yet each is given exceptional warmth—and a semblance of depth—by the human beings who are thrown into it, even though in the final analysis they are really just its fuel.  There is no reason in the world to expect a film as profoundly schematic as Precinct 13, let alone a film as cheap as Precinct 13, to be inhabited by such sharply-drawn personalities—but that is precisely what you get.  They are undeniably one-note; but when it's the right note, who's complaining?

As one Los Angeles Saturday afternoon turns to night, we follow three men and the events that conspire to put them all in the same doomed place.  The first is Ethan Bishop, cop, recently promoted to lieutenant.  For his first night with his new rank, he's given the cushy job of overseeing the skeleton crew at Precinct 9 in District 13, on the last night before their precinct is shuttered for good.  (Yes, the film's title is something of a curious misnomer.)  Our second man is Napoleon Wilson, recently convicted of multiple murders, presently en route to death row.  When a fellow inmate on the prison bus takes ill, the cop in charge is forced to detour to Bishop's station, using their jail to hold his three charges until a doctor can arrive.  The third man is Lawson, who just saw his little girl gunned down in the street.  He kills the man responsible—but when he does, he brings down the wrath of the whole Los Angeles underworld, who pursue him to the defunct precinct, and make it clear that the cops' offer of hospitality has signed the death warrant for every man and woman within.  Soon, Bishop's the only cop left alive.  Now things truly begin: Bishop and the precinct secretary Leigh must join with Wilson and his fellow convict, Wells, if they want to survive; for their enemy, a gang of gangs known as "Street Thunder," is legion.

The notable thing about Precinct 13 is just how Goddamned simple it is.  Boiling things down to a purely existential struggle, our heroes must be defined in the space of brief conversations before the crisis strikes.  And this Carpenter does with outstanding efficiency, assisted by his players' uniformly good performances—and one great one.  There's no denying that Darwin Joston rises above the ensemble more than anybody else; his strikingly charismatic turn as Napoleon Wilson is the very axis upon which Precinct 13 revolves.  Awfully genial and surprisingly heroic for a man about to be put to death, Wilson is the film's most unexpected pleasure—a prototype for Snake Plissken that is, in fact, superior to the actual production model.  His crimes are left deeply backgrounded and mysterious, but, whatever drove him to kill, you are convinced completely of two things: he's really good at it; and surely they must have had it coming.

But we wouldn't get too far without the foundation that Austin Stoker sets with Bishop, whose commitment to law and order probably makes him less interesting than Wilson, though we know him better and can trust him more reasonably: he's an ambitious but pragmatic man who holds fast to decency, and who walked out of the slums so he could become the kind of cop we wish that all cops were.  Meanwhile, Laurie Zimmer turns what (honestly) seems like an inability to remember all her lines into a particular kind of laconic cool.  On the other side, the warlords and their men say nothing at all, communicating solely through visual metaphor, cryptic glances, and ultraviolence.  (Indeed, the only words uttered by any Street Thunder operative are the very first lines of the film, spoken as they enter the killbox set up by a murderous LAPD, setting in motion the events which will ultimately lead to the girl's death.)

Naturally, the Romero influence is very clear, but Precinct 13 gives it an intriguing twist: the Street Thunder soldiers exist somewhere between Dead's zombies and the Viet Cong.  Silent, and sometimes cunning, above all they're shockingly willing to form into a human wave and dash themselves against a prepared position.  Of course this is partly the result of Precinct's lack of finely-tuned choreography and punishing shooting schedule, something that ought to count against it, and it does, even when it's also part of the film's peculiar effectiveness.  (But before we depart from our discussion of the Romero connection, we definitely should mention that Bishop is almost transparently conceived as a progressive answer to Dead's Ben—a black man in charge whose authority isn't continually challenged by an unhinged white person, and who also gets to savor his victory in the end.)

Unlike Dead's zombies, however, we spend much of the first act with the mute Street Thunder warlords; the effect is uncanny.  For the first half hour, Precinct 13 is more of a mood piece than an actioner, and its mood is positively apocalyptic.  Carpenter spells out little, and implies much.  The remarkably multi-ethnic composition of the gang, their warrior zeal, their heavy armaments: these all combine to paint a picture of a city not in the grip of a mere crime wave, but fighting a counterinsurgency campaign against a terrifyingly-disciplined, ideologically-driven resistance army.  And the LAPD seems to be losing: when the assault begins—assuming the form of an attack upon the infrastructure of a hated regime—the loneliness of the precinct house is bolded and underlined.  Earlier, their plan of retaliation has been made clear by the blood ritual they engage in.  Lawson's little girl (and the poor ice cream man, lest we forget about him) was a symbol too: a target of sufficient propaganda value to murder.  When that bullet slices through her vanilla cone and straight into her torso, Carpenter hopes that the sheer mercilessness of the gesture will convince us that Precinct 13 will be a truly uncompromising experience.

Or maybe he'd been recently annoyed by a small child whining about her perfectly delicious vanilla ice cream cone, the little ingrate.  Who knows?

It's a tactic that works almost too well, leaving the whole film unbalanced and nervous with the charge of its transgression.  (De Palma would pull the same trick in his own tale of crimefighting-as-urban-warfare, The Untouchables.)  But the girl's assassination cannot obscure the fact that while Precinct 13 might wear 70s' grindhouse clothes, it plays completely by those old Golden Age rules.  (Carpenter isn't above punishing anyone who'd break his rules, either: the nearly-nameless clerical worker who suggests throwing Lawson back out into the street dies almost as soon as she opens her mouth.)  This clear-cut morality, even more than the quips, decisively pulls Carpenter's film back from the abyssal bleakness of Precinct 13's genre forebears.  Precinct 13 is here to be enjoyed.

What keeps Precinct 13 right on the edge of greatness is, paradoxically, the very same thing that makes it so weirdly compelling.  The miniscule budget winds up forcing a certain level of abstraction to any sequence more complex than dialogue: take, for example, Lawson's epic four-hour car chase to catch his daughter's killers, that begins in broad daylight and ends in pitch darkness; or the outright bizarre emergence of the surviving Street Thunder warlords from the shadows; or the fragmented action editing that suggests cause-and-effect more than it ever actually depicts it; or the dreamlike underpopulation of this film's war-torn Los Angeles.  Precinct 13 steps decisively away from realism, and the result is a movie that is both better than it should be, in that it is more intriguing; yet is somehow a tiny bit worse, in that the kroovy action all-but-guaranteed by its unbearably awesome scenario is not entirely delivered to the screen.

Yet it is solid Carpentry all the same.  Precinct 13 opens with the first brilliant film score of Carpenter's career, a pulsing electronic promise, fulfilled to the best of the nascent master's abilities and finances.  Likewise, it is the beginning of Carpenter's career-long commitment to the possibilities of the 'Scope frame, the first example of his now-famous rule for low-budget filmmaking: if you put the money you have into a good camera and respectable filmstock, and you use both with technical proficiency, it doesn't matter if what you put in front of it is kind of slapdash, because your movie will nevertheless feel real.  Even when it very nearly isn't.