Buckle that swash, part V: Daddy, what did you do in the war? 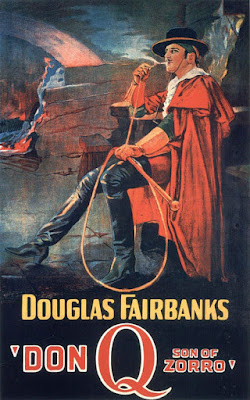 An acceptable offering of Fairbanksian whimsy—right smack in the middle of his personal bell curve. 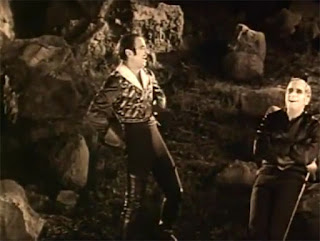 By the time 1925 came around, Douglas Fairbanks had spent close to two years of his life on the most ambitious project of his career, The Thief of Bagdad.  The result was probably the greatest motion picture that had been made up until that point in history—and this was recognized at the time. Thief opened on Dec. 25, 1924, to enormously positive reviews, many critics couching their approbation of the film in phrases that evoke a nearly religious awe.  But Thief was expensive, and United Artists' distribution network was weak.  Thief could never have been a real financial success; the math just wasn't there.  Now, maybe it did make a profit, and maybe it didn't—it barely broke-even at best—so, going into the New Year, Fairbanks just didn't yet have it in him to take it to the limit like that again (at least, not this soon).  Instead, he went to Spain, where he got an idea for something easy.  He had bigger plans, as we'll see; but for the time being, like any star bruised by the box office, Fairbanks withdrew to the safety of a past success.  Less than six months later, he dropped Don Q, Son of Zorro, and it was everything Thief was not: while you can't rightly accuse Don Q of being cheap, it sometimes feels that way, and the step down in ambition that it represents looks a lot more like a swan dive.

Fairbanks had long toyed with the prospect of a sequel to The Mark of Zorro, initially conceiving of a second adventure in the life of Don Diego Vega that pitted the vigilante against pirates.  But once consumed by Thief, Fairbanks threw that idea in the garbage.  It's curious that, upon his return to Zorro, he didn't simply reclaim it.  Instead, the sequel he actually made abandons everything that made Zorro, well, Zorro: its setting, its class war bona fides, and even—for the most part—its hero.  Sure, that subtitle, "Son of Zorro," announces upfront what you ought to expect.  But it's a rude surprise how quickly and completely Don Q detaches itself from Zorro's thematic core, even when it does retain something like its spirit.

Let's turn, then, to Cesar de Vega.  We find him on pilgrimage to Madrid, and with a new preposition in his family name, apparently added between films.  We'll take a nice, long look at Cesar's indolence; but at least he soon gets to show off his skills.  Having already demonstrated a mastery of his whip through party tricks, he becomes an instant hero by using it to send a rampaging bull back to his pen.  In the process he even saves the life of one Don Sebastian—ironically, the same officer he'd nearly just killed in a duel.  For his bravery, Cesar is granted entree to the Queen's circle.  He even makes a fast friend of her Austrian cousin, Archduke Paul.  Best of all for Cesar, in the midst of his bull adventure, he finds himself in the presence of the beautiful Dolores de Muro, and what happens then is only natural. 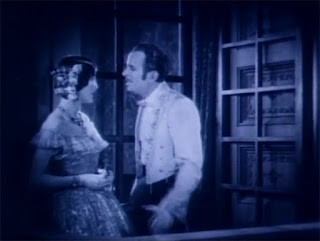 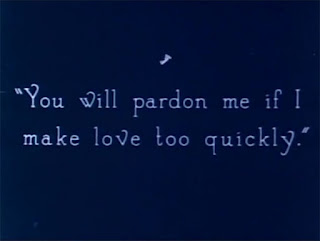 Eventually, however, the plot kicks in.  Sebastian is likewise enamored of Dolores, but when his unromantic advances are spurned, Sebastian stabs the archduke—and frames his rival for the murder.  As Sebastian escapes, the Austrian finds just enough strength to write upon a playing card the name of his killer—but not quite enough strength to actually tell anyone before Cesar's other enemy, the unscrupulous social climber Don Fabrique, can pocket this key evidence.  When Cesar and the corpse are discovered, there is little question of Cesar's guilt.  Cesar has little option but to leap from the balcony into the raging river below.  They assume him dead, having chosen suicide over the dishonor of execution—but Cesar lives, of course, and he intends to clear his name.  Months pass, and—finally!—Cesar gets his chance, when he learns that Fabrique has used his hidden evidence to extort favors from Sebastian.  And, meanwhile—an ocean away—a father hears of his son's troubles, and makes haste to Spain.

So: for the third Fairbanks film in a row, the set-up just goes on and on, as our universe noticeably expands.  Indeed, it's nearly an hour before Don Q's wrong-man thriller actually begins.  Prior to that, the first act unpleasantly echoes The Three Musketeers, with its emphasis on dueling and courtly bullshit.

Still, Don Q somewhat neatly splits the difference between the unendurable longeurs of Robin Hood and the too-fun-to-care first act of Thief; and, anyway, Cesar is not nearly so unbearable as D'artagnan.  Goofier than he is arrogant, Cesar instead embodies a more refined sense of self-parody.  Of course, Cesar is never once as interesting as his father—indeed, the secret identity that made the real Zorro so compelling is nothing but a plot device in Don Q, and winds up discarded in the space of a single scene.  When Cesar briefly adopts the nomme de guerre "Don Q" to fool Sebastian's hatchetman, it's apparently solely to justify the film's title—and to refer back to its credited source material, which (as it may or may not surprise you to learn), was not Johnston McCalley's "Curse of Capistrano" at all.

Oddly, this Zorro "sequel" was based instead upon the final tale of another pulp character, who predated McCalley's vigilante by two whole decades.  This literary Don Q, created back in 1897 by Hesketh Prichard and his mom, Kate, was an antiheroic brigand—kind of an asshole, honestly—a late addition to the corpus of the Black Legend, English letters' centuries-long smear campaign against the Spanish Empire (like they needed help looking bad).  Yet the Prichards wrote Don Q with uncommon nuance.  He might've been a murderous thug, but he was a murderous thug with a chivalrous moral code and a sense of humor, and he proved popular with the Prichards' audience.  However, the character's last novel, The Love Story of Don Q, published in 1906, softened the old bastard.  Both a prequel and a retcon, in Love Story the Prichards finally gave their creation a happy ending—through the Gordian expedient of simply giving him a happy beginning.  19 years later, Fairbanks came along, and for some reason he decided to shove Don Q's happy ending into a story about two generations of Zorros.

(Of course, if there was never any sense in trying to hew to the already-obliterated Don Q chronology, Fairbanks' Zorro sequel doesn't do any favors for its own vague timeline, either.  I have no idea how old Cesar is supposed to be, but if he's just three-quarters of Fairbanks' age, we're looking at a Zorro who confronted the war with the United States—apparently with nothing more than a shrug of his shoulders.  The Vegas still reside in California, and while there are several nebulous references to "America" in Don Q, there isn't so much as an utterance of the name "Mexico.") 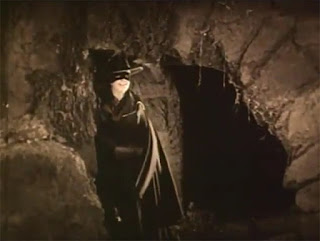 Somehow, I expected more of you.  Like carving a "Z" into James Polk.

This time, Fairbanks received no writing credit.  This unique absence from Don Q's list of scenarists suggests something of Fairbanks' (temporarily) dampened enthusiasm, but I refuse to believe that Don Q's star and producer was not still heavily engaged in its construction—particularly when Don Q clearly evidences Fairbanks' worst flaw as a writer, namely his chronic inability to get his moving pictures moving.

Nonetheless, under the circumstances, Jack Cunningham and Lotta Wood's script does a frankly admirable job of continuing Mark of Zorro's narrative.  The film is positively rife with callbacks, ranging from the subtle (Cesar's paramour is named Dolores, in reference to his presumptive mother, Lolita) to the direct (Diego—having somehow had no cause whatsoever for violence during these last few tumultuous decades—retrieves the blade he sunk into his townhouse's wall at the end of Zorro).  Cesar even has the same dorky predilection for shadow puppetry as his dad.  Ultimately, Don Q culminates in a seamless process shot that delivers Diego and Cesar standing next to one another.  Each is played by Fairbanks, and they engage in a fierce competition to decide which one is the broadest caricature.  Naturally, it's a tie.

I've spoken before of how sometimes a franchise can get by on little more than its own good will, and this was the case in 1925 just as much as it is today.  In the final analysis, Don Q is only a lukewarm swashbuckler, featuring a genial Fairbanks who's certainly pleasant to watch, but who clearly wasn't about to tax himself too hard for a picture he didn't care about too much.  Not that he didn't put a touch of elbow grease into it: we are talking about Douglas Fairbanks after all.  There is some notable jumping and climbing; and, reportedly, he spent six full weeks compulsively practicing with the whip.  Still, there's a reason nobody ever points to Don Q and calls it a classic.

Yet the good will left over from Zorro goes an awful long way toward making up for Don Q's various sins, like the marked initial flaccidity of its script, or its abject retreat from anything remotely approaching Zorro's own fabulistic resonance.  It's absolutely the case that it's only once Cesar finally goes on the run that you can (at last) make any real investment in Don Q's story—but that investment pays handsomely indeed the very moment Cesar reunites with his father.

With Don Q, Son of Zorro, we arrive at something like the holy grail of early cinema: the silent film that actually manages legitimate mediocrity—without falling completely into get-it-over-with badness.  Still, fair is fair; it's slightly too harsh to call Don Q "mediocre."  With some late-arriving but substantial charm, and an amount of incident that's just sufficient enough to distract you from a haphazard pace and overlong runtime, Fairbanks' not-quite-perfunctory tale of the fox and his wayward kit manages to seize the commanding heights of the basically adequate.