In Mexico, sicario means boring—sorry! it's hitman, it means hitman 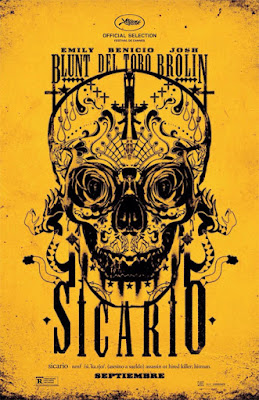 Denis Villeneuve returns with his best Hollywood effort yet—and if it sounds like I'm trying to damn it with faint praise, it's only because I am.

Early in Sicario, we find FBI agent Kate Macer gazing into a mirror after a shower, and the mirror is fogged.  Director Denis Villeneuve and his cinematographer, Roger Deakins, make sure that we cannot make out much more than the barest profile of her actual face, and that we focus instead upon her reflection, obscured and unreadable.  Like the rest of Sicario, this shot is impeccably composed and lit (it's Roger Deakins); like about half of Sicario, it attempts to drive the narrative through visuals alone, something that ordinarily would be commended.  "This movie is about a dedicated lawwoman's descent into the gray underworld of moral compromise," Sicario tells us, "and by the end, she will no longer be able to even recognize herself."  Then you watch the rest of the movie, and say to Sicario, "But nothing remotely like that actually happened."  And Villeneuve strikes again.

Though there is absolutely no mistaking Macer for anything but our protagonist, Sicario seems to get just about as fucking bored with her as her own shadowy associates do.  As well it should: her primary role is the audience's surrogate.  (This is a movie where an FBI agent asks what the word "Medellin" means.)  And yet Sicario must pretend she has character traits or a narrative function, even when the evidence of either of these things is light on the ground.  Therefore, it's with a certain sullen resistance that Sicario meets its obligation to follow Macer around, while she flails about through the darker reaches of the War on Drugs.  It keeps rolling slowly along in this manner, until you just about can't stand it anymore—and then, about three-qaurters of the way through, it stops.  Right there, the film switches its focus completely.  And for maybe twenty minutes, it finally becomes the great thing it should have always been, and which you get the unpleasant impression that it thinks it has always been.

We meet Macer in the midst of one of Sicario's four setpieces, and if there's one thing Sicario can't be accused of, it's starting slow: the first thing that happens in the film is an FBI kidnapping response team, led by Macer and ensconced in an armored personnel carrier, crashing right through the wall of a suburban Arizona home.

She is the one who does not knock, I guess.

Macer has cause to draw blood in the confrontation that ensues, but the true horror only becomes apparent when the gunfight knocks out an interior wall, revealing exactly what they've stumbled into: an above-ground catacomb, packed with thirty or forty rotting corpses.  Then the utility shed explodes.  All in all, not a good day.

At her debriefing, Macer and her partner wait outside like good but impatient children, while a man in flip-flops discusses their future.  This is Matt Graver, a mysterious fellow who claims to be from the Department of Defense, and who's come searching for a talented field agent.  He recruits Macer for detached service, but dismisses her partner when he finds out he's a law grad.  (This is something that might've had more impact if he actually exited the narrative; unfortunately, the partner stays welded to Macer's hip, and his constant presence winds up being the film's other serious structural problem.)  She asks Graver if working with him will let her get to the men responsible for the charnel house in Arizona.  He assures her it will.

In short order, they arrive in El Paso, where they meet Graver's team, notably his chief lieutenant, the even more mysterious Alejandro.  From there it's straight into the heart of darkness sitting right across the border, Ciudad Juarez.  They secure the extradition of a Mexican prisoner, albeit not without difficulty, and render him back to the U.S.  From him, they gather enough intelligence—obtained by methods you maybe don't want to think about—to do something about the Juarez cartel's chief man in America, as well as the tunnel they operate beneath the border.  Meanwhile, Alejandro has his own agenda, and soon, if not nearly soon enough, Sicario becomes his story instead.

And this is a very good thing, since by this point, Macer's only contribution to the film has been to complain about everything while doing very little, much like a Jack Burton with the entertainment value removed.  As neither an active party to the bad things, nor an effective opponent to the bad people, Macer is simply present—and that this is quite clearly the point of Sicario is not likely to prevent an involuntary roll of the eyes.  The film's final gesture frames her as a pathetic victim of corruption, morally untouched yet impotent in the face of the ones who do wrong, and you can't say Sicario has been ineffective.  But it's easy to imagine the far more engaging version of the film, where Macer is allowed to make real choices—perhaps one where the titular character was her.  What is Macer's motivation, after all?  To fight the cartel.  Early on, Graver asks her if she's married, or has any children.  You get the impression that he will become her dark mentor—these are the questions you would ask a woman if you plan send her on high-risk killing missions.  Apparently, he was just making conversation.

"So, what did you major in?  Do you like it in Arizona?  What's your Facebook?  Have you ever shot a man at point-blank range with an automatic weapon?  Was it cool?  Would it be even cooler if you did that more than once?"

Denis Villeneuve is a Quebecois filmmaker with a long history, but who arrived in Hollywood only two years ago; I can speak only to his English-language efforts.  He clearly possesses some quantity of raw talent—and thus, with a pair of films that range from bad to incredibly bad, this means he's also been a pretty consistent disappointment.  Prisoners and Enemy might have fed off his penchant for hackwork, but their breakbeck pace, apocalyptic emotionalism, and confident hubris strongly suggested that Villeneuve was always capable of something truly wonderful, if only he could ever get himself attached to the right project.  Thus, I've been waiting hopefully for the man to get the really good script that would, at last, let him show off his obvious skills—and I suppose I'm still waiting on that, honestly, but let's not pretend that Taylor Sheridan's screenplay doesn't provide Villeneuve the best material of his Hollywood career.

Finally armed with a decent script, at least, Villeneuve decided that the thing to do would be to dial back the qualities that made him a promising filmmaker in the first place.  Rather than the intensity one assumes that Sheridan was going for, Sicario becomes a pacey, pretentious slog.  For most of its running time, Sicario exists in still, ponderous silence, until something vaguely action-like occurs, when it lurches into ungainly motion.  In these moments, its thumping, faintly obnoxious score wakes up and makes unsettling noises, and Villeneuve offers up Sicario's middling thrills, like the standoff on the Bridge of the America (which is well-presented and tactically ridiculous) or the shootout in the tunnel (which becomes a collection of things happening around Macer, sometimes shot in one kind of night-vision, sometimes in another, and neither one of them worth a damn).

Villeneuve's direction does Sicario few favors—Roger Deakins does almost all of the heavy lifting for him—until the tipping point, when Sicario becomes something else.  At this point, Villeneuve comes completely to life for the first time in the whole two-hour film, delivering an action-thriller setpiece as good as anything he's ever done, and up there with the best sequences of the year.  Deakins' best work is contained within this last section, too—there are images that use light and solid black in ways that seem almost impossible.  Thanks to him, Sicario becomes as dread-inducingly gorgeous as anything this year, as well.  But one man is responsible above all others for Sicario's left turn into excellence: in these climactic twenty minutes, Sicario bends entirely to Benicio Del Toro.  His laconic, almost exhausted performance now flares suddently into a blinding star turn, and he renders his very presence so unexpectedly terrifying that, at a certain moment, I honestly jumped half out of my skin.

Before this, though, we have Benicio Del Toro, a quiet man of few words, and Josh Brolin, a loud man of too many that mean too little.  There's the distinct tang of stunt casting to Sicario: the star of Traffic and the star of No Country For Old Men are united for yet another nihilistic venture into the Mexican-American Neo-West.  (One imagines Bryan Cranston and Michael Fassbender had scheduling conflicts, or else they'd be here too.)  But if Del Toro totally earns the critical heat he's generated for himself, the praise Brolin's attracted seems a little puzzling: there's just not that much to find compelling about Graver, either on the page or within Brolin's frankly workmanlike performance.

Then there's Emily Blunt herself, and oddly, she's less convincing here as a run-of-the-mill FBI agent than she was in last year's Edge of Tomorrow as a god-mode monster-slayer—though since probably no actor on Earth could've made Macer's incomplete version of Clarice Starling interesting, no matter how hard they tried, you won't walk out of Sicario blaming her for its problems.

And yet those problems are quite severe enough that you wouldn't feel as if anything at all of value was lost if they'd abandoned Macer's broken archetype altogether, and just made the movie that even the movie itself so obviously and so desperately wants to be.