Buckle that swash, part VI: A variety of shades of brown—all in glorious Technicolor! 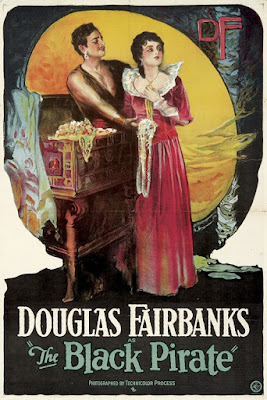 Very close to the ur-text of cinematic buccaneering and color photography alike, The Black Pirate is short, sweet—and even a little bit revolutionary. 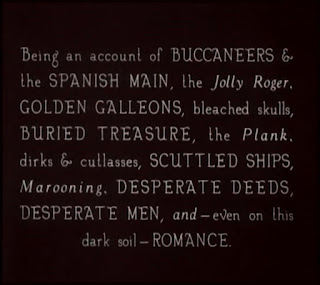 One thing about Douglas Fairbanks' movies that I haven't talked about is their opening intertitles, but I should've—because they're amazing.  And this is the case for all of his actioners: even the bad ones begin well, lifted up on the wings of some of the most pompously overwrought verbiage ever spilled onto a movie screen.  These words set the stage for the exact kind of swashbuckling adventure that Fairbanks did so well, the kind best conveyed—and doubtlessly best received—as myth.  But none of Fairbanks' opening intertitles do their job better than the ones for The Black Pirate, which can't even maintain so much as a coherent typographical scheme as they vault right off the screen and directly into the imagination.  Anyway, this one's about pirates—the most bloodthirsty, etc—but no matter who actually wrote those words, the sheer, unhinged enthusiasm of Pirate's introduction must be recognized as the direct expression of Fairbanks' own regenerated passions in the wake of six months spent on the ambition-free cash-grab he called Don Q, Son of Zorro.

Like every boy born in the late 19th century, Fairbanks had an abiding interest in pirates, and ever since his swashbuckling debut in The Mark of Zorro, he'd been planning some kind of pirate picture.  But other projects just kept intervening, and lately, The Thief of Bagdad's hit to his bank account had necessitated Don Q.  Even while that film was being made, however, Fairbanks kept turning an idea over in his head: a film that did for pirates what Thief had done for the Arabian Nights.  So when Mary Pickford—Mrs. Fairbanks—surprised him with a whole suite of pirate-related gifts on his birthday, shortly after Don Q had wrapped, he took it as a sign and really got to work.  Ultimately, Fairbanks spent over a million dollars to turn his long-cherished dream into reality.

The Black Pirate is the story of the sole survivor of a pirate attack, who infiltrates their crew in order to avenge the death of his father at their literally-bloodstained hands.  Things get off to a good start when he impales their captain at the conclusion of their four-bladed duel.  By the time he's captured a merchantman single-handedly—using but a fraction of his apparently vast reserves of derring-do—he's become the favored candidate for their new leader.  But what our hero forgot was that this new ship was full of innocent victims too—and he knows what these pirates do with their victims.

He entreats the pirates to not be too hasty—this ship and crew, having been taken by ruse rather than force, must be worth a fortune in ransom.  As the crew debates his plan, our hero spies another friendly deliberation, this one over the fate of a young woman found below.  He snatches her away before anything unpleasant can happen—and, thinking quickly, presents her to the crew as nothing less than a captive princess.  So long as she remains "spotless and unharmed," he reasons, their ransom just became guaranteed.  (The "princess" will ask just who her savior is—and we should be pondering the same question regarding this mysterious man with all the right skills.)

But it can't be this easy: in the shadows, the dead captain's vile lieutenant scowls an ugly scowl.  His succession to the leadership of the band's been spoiled.  Now even his rape victim's been taken away.  The lieutenant makes his own plans to undo his would-be captain—this self-styled "Black Pirate"—and through subterfuge, bloodshed, and explosions, he comes very close to getting his way.  In the end, the fate of our hero and his newly-beloved "Princess" Isobel must be determined not by clever strategem, but by battle. 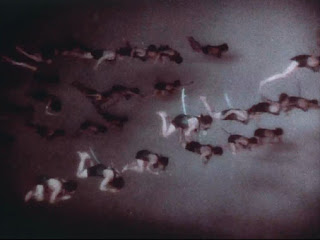 Part of the reason Pirate became so expensive was also part of the reason Fairbanks had not seriously pursued the film earlier: he was absolutely committed to making it in color, believing his idea was simply too vivid to be dedicated to black-and-white.  Indeed, the Technicolor corporation had already possessed the technology to make color movies for several years, having developed Process 2—the first really successful color reproduction technique—in 1922.  (Now, Process 2 wasn't perfect: it could recreate only the red-orange and blue-green portions of the spectrum with accuracy, while deeper blues and yellows could only be approximated.  Nevertheless, Process 2 was effective, and apt to cause a sensation.)

It was only recently, however, that Technicolor had built the physical capacity to develop enough prints to actually support big feature-film releases.  That's how, by 1926, only two full-Technicolor features had yet been made.  (The second of these, Wanderer of the Wasteland, would share a star with Pirate—because Fairbanks thought Billie Dove's complexion worked for color.)  Otherwise, filmmakers had contented themselves by using Technicolor for individual segments.  The example par excellence remains the unforgettable Bal Masque sequence of The Phantom of the Opera.  For a moment, Phantom lunges into another world altogether—bold reds, eerie greens, and virtually nothing in between.  Pirate was made with the same technology—but it takes, let's say, a different approach. 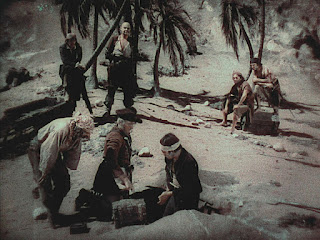 Fairbanks' directive to the art department and cinematographers of The Black Pirate was to avoid, at all costs, the garishness of previous Technicolor efforts.  The result is a very, very rich mahogany.  Fiery-haired and draped in emerald, Dove should pop; yet even her tones are kept restrained.  Meanwhile, the pirates are outfitted in such eye-catching hues as gray, burgundy, gray, khaki, gray, and darker gray.  Only Fairbanks himself, in black rags, really stands out.  And you would be correct to guess that Process 2, incapable of reproducing genuine blue, presents a uniquely uncanny ocean.  Naturally, most of Pirate wasn't shot on location anyway, but on wooden sets floating in giant tanks of water set up at Fairbanks' studio—where the water was dyed to match Process 2's dark green reproduction of the sea.  Early on, the film does resort to a true crimson—but very briefly, and only to underline the violence it represents. 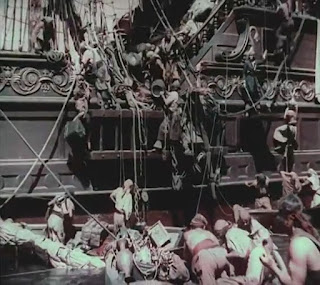 Incidentally, this film, unlike some latterday pirate-centric endeavors, makes it perfectly plain that there's a reason why pirates are called the enemies of all mankind.

And I'll admit it: the first time I saw Pirate, I wasn't impressed.  Having had over a year to reconsider (and having made two further viewings, on Kino's extremely well-mounted blu-ray edition), I've had cause to completely change my mind.  The blindingly bright light necessary to expose the filmstock under Process 2, along with Process 2's silver-dollar sized filmgrain, annihilate detail on the actors' faces—while revealing detail in the woodwork behind them.  Combined with the muted palette, it creates a washed-out, even sketchy effect, and Pirate evokes nothing so much as pen-and-ink Victorian illustration.  (My girlfriend said it looks like a whole movie shot in an Instagram filter, although I think this is maybe a little dismissive of the artistry involved.) 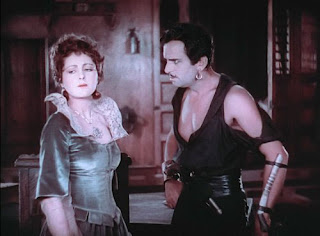 Douglas Fairbanks: innovating for the jerkoffs of the future.

True, it's just about the furthest thing from "vivid"—but it still probably couldn't be much more perfect, allowing the texture of the costumes and sets to take precedence over the potentially-overwhelming novelty of color.  (It can't be overstated how much Fairbanks, along with many others, mistrusted color.  It was even believed that subjecting audiences to it for a feature presentation could be physically unpleasant.  This sounds stupid until you remember that Process 2's flicker-based antecedents like Kinemacolor were, indeed, fucking awful.)

Either way, this fateful decision to shoot in color—made by Douglas Fairbanks, the great producer—was the best thing that ever happened to Douglas Fairbanks, the crappy writer.  The expense of color, and those unjustified fears for the audience's puny eyes, suggested an abbreviated runtime.  For Fairbanks and his scenarist, Jack Cunningham, this meant a severely pared down scenario.  It's depressingly easy to imagine a version of The Black Pirate unrestrained by these concerns: in that version, it'd be an hour before our hero even got on a Goddamned boat.  This Pirate, however, is miraculously propulsive, its revenge-driven conflict already approaching flank speed before the film has even begun.  When Pirate pauses at all, it's for a brief grace note or a quick gag.  For once, Fairbanks trusted to the elemental simplicity of his tale, rather than an agglomeration of increasingly-boring incident, and Pirate thus becomes the purest action film in Fairbanks' canon.  And yet thanks to that unparalleled efficiency, Pirate's story still has the time to effect a gentle twist—and maybe even two.

Of course, it's the stunts we came to see, and Pirate must be the legendary daredevil's mightiest showcase.  It's the locus of his most iconic stunts—above all, his descent from the upmost rigging of a tall ship, borne by his knife buried in the sail.  All done in-camera, Fairbanks' illusions are either expert—or, at the very least, they're false in a way that's magical and charming rather than anything crass.  (Only one stunt in the whole film fails to entirely play.  That's Fairbanks' free climb up the aft side of the "ship"—where the lack of a continuous take, or even any cross-cutting that might have hidden the seams, lets us know in no uncertain terms that what we're watching is three separate climbs, up three separate twenty-foot tall props.) 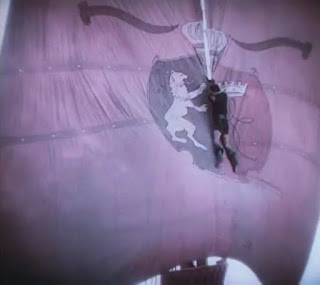 Lay off the man.  Those two packs of cigarettes a day weren't going to smoke themselves.

The true surprise of The Black Pirate, however, is how unmistakably directed it is—by your sixth Fairbanks film in a row, it is basically impossible not to notice that this time there's an actual personality in command of the camera.  (Thief may be an outright masterpiece of design, but you don't get the feeling that Raoul Walsh was ever doing much besides translating W.C. Menzies' monumental imagination into workable shots.)  Camera technology was rapidly improving in the mid-20s, but that can't be a full explanation for it.  Like Walsh on Thief, director Albert Parker begins with still-life mise-en-scene, corralling his throngs of actors into dense, even painterly compositions.  Unlike Walsh, he doesn't just stop there.  Parker's mobile camera becomes, itself, an integral part of the story being told—why, it's almost like we're watching some kind of movie.  Even Fairbanks' swordfights, which traditionally involved good choreography but bad filmmaking, are genuine thrills in Pirate; here, they're put together with both solid fight direction and solid montage, utilizing very clever close-ups that put the camera right in the middle of the slashing blades.  (Unfortunately, outside of the fights, Albert's editing scheme occasionally makes for extremely haphazard geography.  Some sequences of shots and reaction shots honestly kind of look like children glued them together, thanks to the flat staging of a very three-dimensional set, and the weird and seemingly-impossible eyelines that result.)

Yet you suspect that these problems are due to the limitations of heavy 1920s movie cameras (and maybe the limitations of the set itself) rather than any limitation inherent to Parker's own sensibility.  And you'll find it easy to forgive such comparatively minor flaws when Parker whips out perhaps silent cinema's single greatest shot—so flabbergastingly modern that it's practically surreal.  It's a tracking shot, fixed upon Fairbanks' irrepressible grin as he is lifted up by his allies through the endless holds of the ship and onto the deck.  In this indelible moment, Parker gives our hero his triumph in the very boldest form that it could have ever taken—and, more than that, the most beautiful, and most truly sublime, as well. 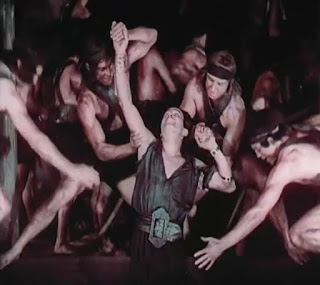 Yes, Thief of Bagdad will always remain Fairbanks' best film; it is too singular in its vision, and too unique in its construction, to ever call it anything else.  Yet The Black Pirate comes awfully close to knocking it off its pedestal, just by being such energetic and well-made fun.