By this point, you'd think they'd be notorious 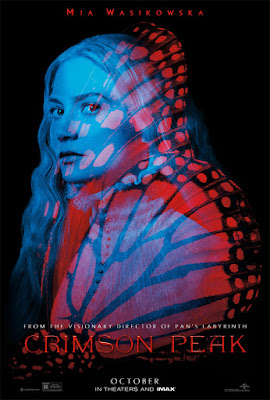 Immaculately-designed boilerplate done extraordinarily well, Crimson Peak is as wonderful a Halloween treat as you could ask for—just don't expect any tricks to come with it, too.


To get it out of the way: Crimson Peak, a pastiche of Gothic horror as practiced from the 19th century to the late 20th, which quotes everything from Mary Shelley to The Changeling, is simply not scary.  It is not scary by any absolute measure; it is not scary even by the somewhat relaxed terms of its particular subgenre.  And this is something that—generally speaking—would need to be counted against a horror movie.  True, it's scarier than its resolutely unfrightening marketing campaign; but, really, you could say that about almost anything, including commercials for financial services, or your dirty dishes.

In terms of terror, Peak strikes its highest pitch in its very first ghostly visitation.  It occurs less than three minutes in, with a nod to Nosferatu, but rather than the possibility of spiritual violence, it signifies a well-meant warning from the netherrealm: "Beware of Crimson Peak."  When we arrive at Allerdale Hall—the Peak's much less ominous proper name—it too is lousy with ghosts.  These apparitions seem far less friendly, but perhaps we can forgive our heroine, Edith Cushing, when she quickly comes to regard them with mere hostile curiosity, as opposed to the savage, unreasoning horror we might have preferred to expect. 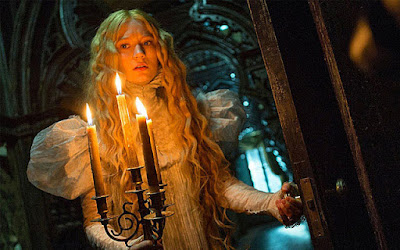 There was a version of Crimson Peak that could have been terrifying, and maybe that's the film that Guillermo del Toro ought to have made.  But this takes precious little away from the film he did, which is as sumptuously gorgeous—and nearly as perversely thrilling—as any horror movie you might care to name.

The plot is not very important, though it does hang together tremendously well, anchored as it is by a cast of great performers (and also Charlie Hunnam, who is limited to a secondary role this time and thus can do no damage).  It's a simple story—and a somewhat predictable one—but nobody told them, and maybe nobody told del Toro, either, who pursues it in his typical heartfelt way, but now to far greater returns than his last film, that abortive faux-kaiju epic, Pacific Rim.

Let us return to Edith, now a grown woman.  The only child of industrial magnate Carter Cushing, Edith wiles away her privileged days by avoiding marriage to her father's chosen suitor, the handsome doctor, and by writing ghost stories inspired by her own genial hauntings, which have (so far) remained unpublished.  Everything changes when a dashing stranger enters her life: Sir Thomas Sharpe, an English baronet with big plans and (of course) no money.  Though the elder Cushing scoffs at Thomas' scale models and soft hands, the daughter naturally falls in love.  And thus it is not too long at all before Edith is on her way to England with her new husband and his sister, Lucille—though, in the meantime, her father meets a rather suspicious death.

(And "rather suspicious" would be the most tactful way to the describe it: the film requires you to believe that those charged with the inquest took a look at this man's half-opened skull, and concluded that what must have happened was that Carter fell in the bath, hit his head on the sink, then stood back up, fell on the sink again, and—having decided that his brains had not yet been entirely bashed out—stood up once more to give it one last try.  But since we do get some lovely, lovely grue out of the deal—Crimson Peak being completely unafraid to explore the options of its R-rating insofar as blood and gore are concerned—I see exceptionally little reason to complain about it.  In any event, only his doctor sees anything actionably mysterious about Carter's little accident.)

Once Edith arrives at the seat of the Sharpe family's demesne, the aristocratic squalor of the Sharpes' lives is instantly oppressive, Allerdale Hall itself a great ruin nearly unfit for any human habitation at all.  A giant hole in the roof exposes the ballroom to the elements, a constant supply of autumnal leaves and wintry snow tumbling slowly through the void in the center of the Sharpes' home.  Meanwhile, the structure is sinking slowly into the red clay upon which it was built, and which seeps into the snow, turning it the color of blood and giving the estate its colloquial name.  Indeed, if such a poisonous atmosphere were not host to an infestation of spirits, you'd almost be disappointed.  And as far as the land of the living goes, Lucille's attitude certainly cannot be mistaken as cordial, either.  What dark secret must Crimson Peak hide? 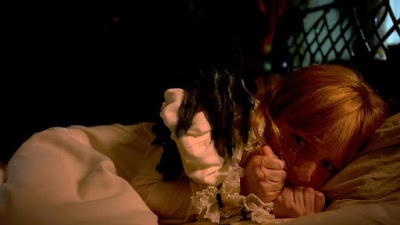 Is it also pixelated?

You could probably solve Peak's mystery without ever seeing it in the first place; there is no doubt that you'll have intuited the basic shape of it before the last reveal.  If anything, you might get a little discouraged, when it takes a turn toward the most prosaic of all possibilities—but rest assured, it retrenches into the weirdest reaches of the mundane.

And it all makes so little difference—it is paced well enough, and given enough fine detail, both within the script and by the actors who give it life, that Peak would never be boring even if it were not also so vividly realized.  But vividly realized it certainly is—and that is understating the matter.

Peak is about evoking a mood through the totality of its design, a mood rarely glimpsed since the Gothic horrors of Hammer Films and—even moreso, despite the direct reference to the competition—Roger Corman himself.  The difference now is the detail and loving attention that 55 million dollars can buy, bringing real opulence to a genre that, in its heyday, contented itself with a few hundred thousand per picture and just one set, redressed and reused time after time after time.  There is something to be appreciated about Peak's high-priced horror—it is not the kind of thing that comes along that often. 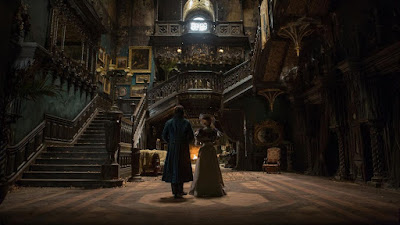 "Do you like pneumonia, cholera, tuberculosis, and lice?  Then you'll love it here, my sweet."

And despite the easy points that can be scored on Peak's slightly-too-slickly-composited CGI, the gaseous conception of its spectral visitors remains solid, and their execution unerringly lush.  It conspires against the film's potential for horror—Poltergeist alone really ever got away with showing its ghosts—but the sheer expense of Peak's spirits fortifies it as spectacle.

What a spectacle it is!  Having secured the money to spend, Del Toro was lucky enough also to find a brilliant artist to spend it for him, namely Thomas Sanders—the designer mind behind efforts as diverse as Braveheart, Saving Private Ryan, After Earth, and Apocalypto.  (Note well that whatever sins After Earth commits, its production design wasn't one of them.)  We've had cause to praise Sanders to the heavens before, but he returns with what certainly must be his truest masterpiece yet.  Sanders, of course, has dealt with the archly Gothic previously, and you can just imagine the man, looking back at his design for Bram Stoker's Dracula—and deciding that it simply did not sufficiently evoke the extravagance of a bygone age after centuries of physical rot and moral decay, and so this time he'd just have to do it better.  Somehow, he did, and Peak is the result.  Not that Sanders did it all by himself: he finds a wonderful partner in Kate Hawley, whose impossibly lavish costume designs serve to establish the characters every bit as much as the actors themselves. 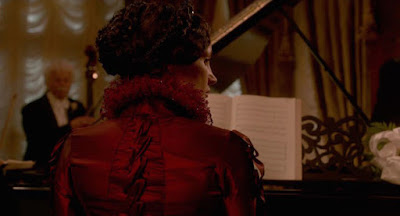 Finally, we must treat with Peak's unimpeachably divine cinematography, courtesy of Dan Lausten, a veteran of B-movies that are not, to my knowledge, known for any sort of artistry at all—except perhaps for Mimic, which not coincidentally was his one previous collaboration with del Toro.  Whether Lausten is but the conduit for del Toro's vision, there is no sense in denying his accomplishment: Crimson Peak is a hyptonizing kaleidoscope, garish and vivid in all the right ways, solid colors layered one atop the other—orange and green and, oh yes, red—mottled by the rain on windows, and sliced clean through by insidious shadows.  In nearly every frame, Crimson Peak stakes a claim to being the most beautiful film of 2015.

But as cinema—rather than as architecture, or as photography—Peak is such a playful affair, and there's so much to find charming about the integration of its breathtaking images into a coherent whole.  Irises and hidden wipes dominate del Toro and Bernat Vilaplana's editing scheme, brazenly calling attention to themselves.  And perhaps Peak's lack of horror qua horror can be laid right at the feet of this unconventional montage, since I'm not certain it was possible to make Peak both scary and still use a dozen iris-outs to cut between sequences.  Yet, given that Peak likely wasn't going to stick to the soul anyway, it's easier instead to find its overt artificiality delightful—rather than just distracting.  I have but one complaint on this front: del Toro's use of his literary framing device.  (When Peak begins with an image from its ending, then leaps completely out of its own continuity to offer up a Sleeping Beauty-style storybook open, it's jarring and, honestly, somewhat rude.)

Of course, that's the littlest point—but if Peak can be said to have a major weakness, it's the score.  Fernando Velazquez, who could do horror film music in his sleep by now, surely didn't see fit to reinvent the wheel here.  His work for Peak is forgettable—indeed, forgotten the moment each note passes, let alone 24 hours later.  Annoyingly replete with obvious scare cues, it is a genuine pity that a film of such formal excellence, in literally every other respect, must sadly make do with music that is so pitifully generic.

But "formal excellence in literally every other aspect" leaves rather little room for criticism, doesn't it?  Beauty and mood are to be found in abundance in Crimson Peak.  The only uncertainty is which is subordinated to which—beauty to mood, or mood to beauty.  Either way, the del Toro of Pan's Labyrinth is back.  And he's brought with him the most pleasurable thing I've managed to see in theaters in quite a while.