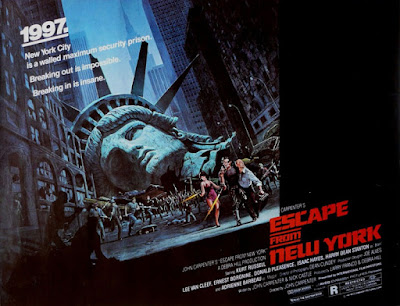 The zeitgeisty classic that introduced the world to an iconic dickbag and crowned John Carpenter the king of the cult filmmakers.

In certain circles, Escape From New York is irreproachable, and it's not that hard to see why: the easily-embraced high concept; the now-mythic efforts of production designer Joe Alves and location manager Barry Bernardi; and, more than anything, the deep vein of juvenile machismo running through the whole damned thing—who keeps insisting you call him "Snake," right up until the moment he tells you to call him "Plisskin."

And so it's natural—particularly for viewers at just the right age to get the maximum benefit from John Carpenter and Nick Castle's comic-book-come-to-life brand of storytelling—to overlook the fact that Escape is also overambitious, underbudgeted, and wouldn't come close to cracking the top tier of the action films of 1981, the year Raiders and Road Warrior changed the game.  It shouldn't even be counted on any sufficiently short list of 1981's exploitation films—not when that seminal year gave us Scanners, Evil Dead, My Bloody Valentine, and Blow Out (along with a certain extra-special sequel that we'll be getting to next time, just you wait and see).

Of course, being surrounded by titans on every side doesn't make Escape any worse, and there's one superlative that must be accorded the film: maybe it's not the best movie of 1981, but if there's even one movie that is more clearly the product of 1981—that better captures the pre-dawn desperation that gripped the nation as a Morning prepared to rise upon America—then I don't know what it could be.  Carpenter's cartoonish premonition of 1997, soaked in left-wing anguish and right-wing paranoia alike, remains nearly as compelling a portrait of the Future as seen from the Past as there's ever been.  Its fun generic elements raise it to the level of passably entertaining; but it's Escape's survival pod full of turn-of-the-decade angst that makes it great.

As Jamie Lee Curtis helpfully tells those of us who can't read—perhaps thanks to our collapsing inner city schools—in 1988 the crime rate in America jumped 400%.  Curtis is sketchy about the exact details, but over the next nine years, America turned toward what can only be described as neo-fascism for its salvation.  Unfortunately, what America actually got was, on one hand, a single maximum security prison for the whole country, sited upon and inclusive of the whole island of Manhattan, many of its poorer inhabitants apparently walled in when they shut the urban hellmouth down, and joined by every criminal in the custody of the United States Police Force; and on the other hand, they got a world war with the USSR and PRC that has, somehow, not found a way to go thermonuclear quite yet—though our British President knows that this is exactly where it's headed, and that's why he's on his way to a peace conference with our commie foes.

And that's when Air Force One is hijacked by leftists (possibly even Soviet fifth-columnists), and crashed right into Manhattan, the very symbol of America's racist imperialist whatever-it-was (Carpenter doesn't care about it enough to actually let you clearly hear the content of their political statement).  The President survives (his aides do not), and is promptly captured by the prison's most powerful gang leader, the self-styled Duke of New York.

So this is where former Special Forces officer and current convict Snake Plissken enters the picture—I'd say finally, but everything in those three giant paragraphs is disposed of with an almost unholy narrative efficiency.  Indeed, a fair amount of the preceding synopsis is the result of filling in all the tantalizing gaps that Carpenter and Castle leave for us.  Like Star Wars before it or Blade Runner soon after, Escape creates a breathtakingly vast mythology out of nothing but its rich aesthetic and a few choice references, like the line "You flew the Gullfire over Leningrad, didn't you?", or the impossibly perfect detail of the recording that helpfully explains to prisoners on their way to Manhattan what steps to take if they'd prefer to be killed and cremated instead.  Unlike Star Wars or Blade Runner, though, this wide-open world exists only on the margins, and Escape's creators wind up investing their central conceit with scarcely more imagination than a street gang movie actually set in 1981.  (It's especially surprising—though given Carpenter's customary avoidance of nuance, it shouldn't be—that the Duke isn't portrayed with the slightest sympathy, since he's arguably the closest thing that Escape has to any heroic figure at all.)

Still, I can't tell you how much I love the world-building in this shot right here, even if it's beyond dumb to ask us to believe that some guy drilled through Manhattan bedrock and found oil with the materials he had on hand.

As you know (or damned well ought to know), Snake is recruited by Hauk to infiltrate Manhattan and is promised a full pardon if he proves to be a bad enough dude to rescue the President.  Despite making a big show of how much he doesn't give a shit, Snake agrees.  He's to breach the city by way of the World Trade Center on a jet glider—Carpenter and Castle not seeing any contradiction in those terms, though apparently it's capable of flying all the way to Canada once it's airborne, and that's why Hauk's taken the precaution of putting a couple of itty-bitty explosives in Snake's carotid arteries, both to make sure he does his job in the first place, and to give him the motivation to do it before the whole world's time runs out.

But once he's in, Escape offers scant few surprises.  Thus Snake fights a gang of hoodlums, some of whom are colorful, most of whom are not; he finds an ally or three, though he probably oughtn't trust any of 'em; he gets captured; and, eventually, he makes his way to the President.  In the meantime, the script (somewhat irksomely) really insists upon Snake's badass resume, with the only motherfucker on the whole island who's never heard of him being the President that he once faithfully served.  The actual action content of this action movie, meanwhile, is solid enough—and almost never especially invigorating, with Snake reduced to incredibly fake martial arts half the time, and clumsy, badly-choreographed brawling for the other half.  Expensively bloody violence is seldom seen (though I'll certainly concede it's effective in those rare moments it is).  And the best kill, in this badass actioner with not too many kills of any kind, doesn't even belong to Snake.

Why didn't Dr. Loomis ever get an assault rifle?

As our positively archetypal antihero, Kurt Russell works his hardest to be unlikeable, and although he doesn't succeed, he's still giving the surliest performance of a career that's usually seen him do his best work in a register of sleazy affability—the temptation to play against his Disney comedies, by doing his best-worst Clint Eastwood impression, was apparently overwhelming, and Carpenter absolutely indulges Russell's caricatured masculinity, clearly thinking it's the coolest thing in the world.  And sometimes it even is: "Are you gonna kill me now, Snake?"  "Not now, I'm too tired.  Maybe later."  A flat prick is just about exactly what Escape needed, and I can't tell you that Russell doesn't deliver.

Of course, Lee Van Cleef knows how to deal with any would-be Clint Eastwood.

Oh yes: Russell is quite ably supported by an all-star cast, and though this description depends heavily upon your definition of "star," there's hardly anybody in the first dozen credits whose name doesn't ring a bell, and indeed hardly anybody from outside Carpenter's established stable, from his wife all the way down to an old Assault on Precinct 13 collaborator, as the clear stand-out amongst New York's many thugs, Romero.  (Turns out Frank Doubleday can speak!)

Nobody, however, should ever describe Escape as an actors' triumph.  Rather, much of the credit for Escape's great effectiveness goes to Dean Cundey's inky cinematography, Joe Alves' anthropological production design, and Stephen Loomis' outrageously iconic costume design.  And the real lion's share must go to the locations themselves: Sepulveda Dam, the brand-new transit system of Atlanta, and (above all) the beleaguered city of East St. Louis—and its incredibly pliant government, who turned off electricity to whole swathes of the city so that Escape's Manhattan could feel abandoned, and who gave Carpenter a whole bridge so he could blow shit up on it.

Escape, of course, is the legendary example of filmmakers winning out over a budget pitifully unsuited to the story they were trying to tell, in this case $6 million to make a movie set in a major world city projected into a ludicrous future.  (Blade Runner, by contrast?  $28 million, and the difference really, really shows.)  But given the keys to East St. Louis, Carpenter, Cundey, and Alves nonetheless craft a shockingly comprehensive urban jungle.  It might not ever quite convince you that what you're looking at are the streets of a dystopian Manhattan, specifically.  But they make Carpenter's vision of total social disintegration completely palpable, and literally concrete.

Carpenter had written Escape all the way back in 1976—the same year Precinct 13 came out, a film operating upon much the same lines, although showing an America at a somewhat earlier stage of decay.  (However, it was Castle's rewrite that layered on Escape's badass humor, thereby securing its enduring cult status.)  It's not as well-trafficked a well for Carpenter as his apparently endless fascination with sleeping evils; but the idea of entropy, as applied to civilization, is the other big theme that defines the man's work.

But then, he did come up in the 1970s, and weren't things just so grim, back when any high school drop-out could get a good job, the minimum wage meant a living wage, a college degree meant genuine success, and the regulatory state effectively enforced our rules?

Whether Carpenter was doing it on purpose or by accident, he's always been a man uniquely capable of bringing conservatives' fears to cinematic life: Precinct 13 rendered gang violence like a Viet Cong assault; Halloween offered the notion that the suburbs not only weren't safe from evil, but could nurture it right into life; and The Fog told us that the people who stood in the way of America's destiny will never forget what we did to remove them.  (It's fascinating, coming from a filmmaker who so obviously bends left.)

Then came Escape, and Escape had something for everyone.  Escape is everything horrifying about 1981 in just 99 minutes: rotting urban cores, sterile technocracy, angry minorities, blithe presidents, nuclear war, and a war for America's soul, just then beginning in earnest.

Also, a man who had a cobra leaping out of his groin.

And it's Carpenter's amazing score, too, written and performed in his first collaboration with one of his most essential partners, Alan Howarth; it's less urgent than his previous works, and, indeed, it's about as melancholy an action film score as you'll ever hear, but it manages to be an elegy without sacrificing the sheer intensity that had always been and would always remain Carpenter's signature.

As for the ending—I used to hate the ending.  Now I think I get it.  When there were plans to remake Escape and Gerard Butler was in talks to play Snake, Russell objected to the casting—because if there's just one thing that Snake is, it's American.  And perhaps nothing was more American in 1981 than saying "fuck you, and fuck this," and just letting it all burn, because we were too tired and angry to even be scared anymore.  The sad part is, 34 years later, Escape From New York has never stopped resonating.