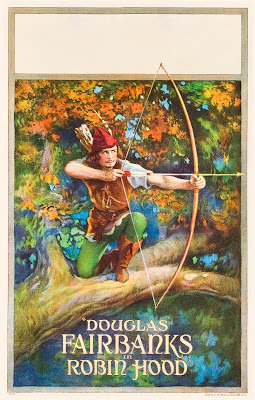 I know that silent films don't need to be slow or boring, and yet, sometimes, they are. 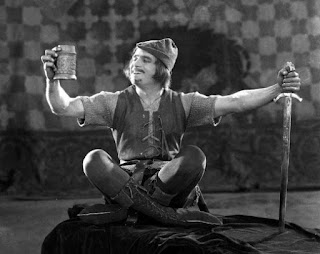 Douglas Fairbanks was a charismatic actor.  He was an extraordinary showman.  He was a savvy producer.  Maybe he was even a gentle lover—ask one of his three wives.  And, well, he was kind of a lousy writer.

Fairbanks' creativity obviously can't be discounted—with only one exception, for each of his eight silent swashbucklers, Fairbanks either came up with the material himself, or he chose the existing material he wanted to adapt.  Thus he must be credited for the basic direction of most of his films, including the great ones.  But it's also very much the case that the less assistance he had on any given project, the worse it invariably tended to be.  For Robin Hood, Fairbanks' only helper was his faithful scenario editor, Lotta Woods.  And I'll level with you: I don't even know what a scenario editor actually does.  Whatever it is, it's evidently not enough, because Fairbanks more-or-less wrote this whole movie—and, dear God, does it ever show.

Fairbanks' foremost weakness as a writer was his inability to just get on with it.  He had a truly indecent tendency to structure his films so that they either became repetitive—with only the visuals to save them, if they possibly could—or so they would just never, ever start.  Indeed, his previous film, The Three Musketeers, was exasperatingly repetitive.  Robin Hood, however, could never showcase something as comforting as mere repetition.  After all, to ever repeat itself, it would've needed to have actually done anything before it was practically over.

As you might readily guess, Robin Hood is about the green-clad vigilante who (as English legend has it) stole from the rich and gave to the poor during the last years of the 12th century, when the comparatively benevolent King Richard had gone away to fight for Christendom, and his evil viceroy, Prince John, had come to treat the country as his own personal property.  However, in Fairbanks' rendition of this seemingly easy-to-tell tale, King Richard doesn't leave England for the Crusades until roughly thirty minutes have elapsed; Robin Hood, who has joined him, doesn't return to England for twice that span; and the name "Robin Hood" does not appear on an intertitle until fully one hour and seven minutes have gone by—which is to say, more than 60% of Robin Hood has already passed before we ever get to the very first scene that might, even theoretically, involve Douglas Fairbanks jumping or climbing on much of anything at all.

Before that, we follow the cypher known as the Earl of Huntingdon—and this really does amount to a kind of fraud.  We meet Huntingdon amidst the celebrations preceding Richard's departure upon the Third Crusade.  The King's champions tourney for the prestige of being his second-in-command.  Their game is joust: Huntingdon handily knocks his slimy opponent, Sir Guy, from his horse, and thus fortifies his status as Richard's favorite vassal.  Naturally, Guy festers with resentment—as does his own benefactor, Prince John, who has designs upon the throne beyond just keeping it warm for his brother.  The two hatch their plans during the post-games feast.  They even assault a maiden, Marian Fitzwalter, requiring the intervention of Huntingdon, and naturally this confrontation just deepens the mutual enmity that already existed between our presumptive hero and our presumptive villains. 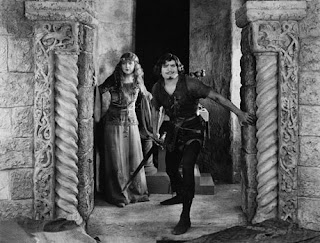 And where is the Sheriff of Nottingham?  Out sheriffing, I guess, insofar as he's never mentioned in the whole movie.


After the long, long, long journey to the Holy Land has begun—its first leg being an overland march across France, England's ally in the struggle against the Saracen—word reaches Huntingdon of John's gross mismanagement of the kingdom.  He refuses to tell Richard, for the Crusades are important and Huntingdon knows Richard well enough to suspect that, if he were aware of his brother's crimes, he would turn right around and leave Jerusalem to the Musselmen, an intolerable situation if there ever was one.  In other words, it's an excruciatingly weak excuse for what the film needs to have happen next: since Huntingdon has resolved to do something about the situation, it means he must desert Richard, and in the process he is caught and locked in a dungeon.  Eventually, of course, Huntingdon escapes, making his way back to England.  There, to his dismay, he's told that Marian has died, having been forced off a cliff by John's scheming.  He vows revenge—and, following, a fade to black, Robin Hood's war against John is already well underway.  Meanwhile, back in France, Guy thinks he's assassinated the erstwhile king, elevating his benefactor to the legal monarch of England.  But Richard lives—and, besides having an urgent need to get to the bottom of his own attempted murder, he has an inkling he knows exactly who this new and mysterious enemy of his state must be.

Essentially, then, an entirely different movie begins with Huntingdon's discovery of Marian's "death."  You can easily tell the difference, too, because this movie is actually somewhat fun.  When Huntington finally dons his tights, Robin Hood finally puts the whip to its story, too, moving from a velocity of nearly zero to a pace that's breakneck in comparison ("breakneck," I said—still savoring Sir Guy's final fate).  Hell, it's practically disorienting: every bit of Robin Hood's narrative acceleration occurs within the space of that one hermetically-sealed fade-out.  Somewhere in the middle of that black ellipsis, director Allan Dwan woke up, and at last he decided to offer the audience some well-constructed adventure.

Yet you might reasonably expect that any Robin Hood movie which makes you wait over an hour to see the titular character would at the very least dig deeper into his Merry Men than usual, telling of the lives they led before they rendered themselves homeless to go live with a trickshot archer in the woods.  Of course, this isn't the case at all: immediately after Robin Hood's flash-forward, we meet Robin's retinue already assembled.  They are granted their customary names (Little John, Friar Tuck, Will Scarlet, and so on), and this is absolutely all we get; they might as well have simply sprung from the loamy soil of Sherwood Forest for all it matters.  Indeed, if Robin Hood had stressed this kind of blunt narrative efficiency for its first hour, the whole endeavor might have been worthwhile.  Unfortunately, we were forced to spend time with Fairbanks' dishwater-dull nobleman, whose chief characteristic was a seven year old boy's aversion to girls.  (Because if there is one thing that audiences have always desired from a Robin Hood picture, it's a version of the famously romantic hero who runs away from anything in a dress, while he dribbles out to his liegelord, "But I'm afeared of women!"  We can be thankful, then, that along with his change in moniker and fashion sense, Huntingdon's personality is likewise melted down and poured into Robin's iconic mold.)

The front and back halves of Robin Hood are just such incompatible things.  The first is a bad medieval melodrama that simply happens to involve the historical personages of Richard and John Plantagenet.  The second is a hodge-podge of elements from the Robin Hood myth, thrown somewhat lazily together, but one that does manage to get the fundamental attraction of the legend right.  (Sure, we may not see Huntingdon so much as touch a longbow before returning to England, but Fairbanks' Robin Hood still has the archery skills to pay the poor people of Nottingham's bills.)  We are offered, in compensation for our long wait, some decent and occasionally even brutal swashbuckling—Robin's coldblooded use of an enemy soldier as a human shield is straight-up shocking, coming from what we sometimes imagine was a more genteel cinematic age.  Meanwhile, Robin's acts of domestic terrorism are punctuated by Fairbanks' exploitation of his picture's quite impressively climbable set design.  And does Robin discover that Marian isn't really dead, and that he must rescue her from John's dastardly clutches?  Well—if a Robin Hood movie couldn't do that, would it even be a Robin Hood movie at all?

Fairbanks, once beyond Huntingdon, is just such a terribly appealing Robin.  He's playful and spritely (and violent!) in all the ways you'd want Robin Hood to be, and this certainly counts for something, but it mainly counts as a badly wasted opportunity.  It is incumbent upon any film to be interesting, and this obligation goes double for silent pictures, for even at high degrees of intrinsic quality they nonetheless demand a level of focus from their audience that talkies just don't.  Fairbanks' third swashbuckler, unfortunately, doesn't really reward your investment.  Oh, Robin Hood's second half is certainly easy enough to watch—but, sadly, this is only the case if you're still awake after the first.