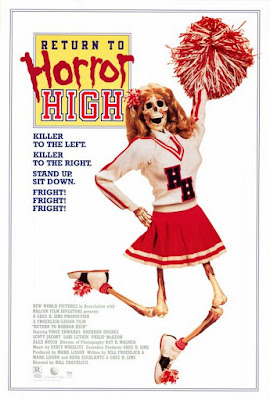 RETURN TO HORROR HIGH
And once again we welcome you, to our October Switcheroo
Where Brennan Klein deigns to review nice old sci-fi, like I would do.
But pretending to alliance, Brennan sends me 80s violence!
Cardboard Bloodbath, Census Science, demands psychic realignment.
Oh we have fun—requisite links.  Here's hoping that not too much stinks.
Poetry blows, J. Slasherfan thinks. Give me TITS and DEATH, that's my kink!
1987
Directed by Bill Froelich
Written by Bill Froelich, Dana Escalante, Mark Lisson, and Greg H. Sims 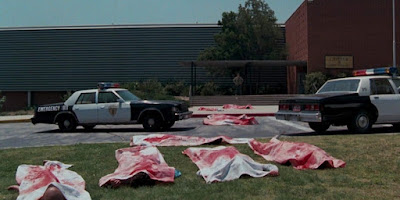 Hiding behind an innocuous title, Return to Horror High is the kind of movie that pounds it home that Brennan Klein and I have been doing this crossover thing, three films a pop, for nine years years now.  Almost a decade of it, then!  And I suppose what it shows is that Brennan has been nice, or I've just been lucky.  The number of movies I haven't liked much is about one-third; but there had been none that had really hurt me, none I had really despised.  Two days ago, if you'd asked me, "What is the worst movie Brennan ever made you watch?" I don't know if I could have answered that, without thinking very hard about it and looking at the past nine years and the list of the last twenty-five movies I've screened for Census Bloodbath.  But now my answer would bolt out of my mouth before you'd finished the question.  I also realize that this was accidental, despite the fact that in some of my selections for him during our annual crossover, I've obviously been asking for some measure of Brennan's revenge.  This was particularly the case last year, so it would make sense if, this year, he took it.  But Brennan... likes this movie.  A fair amount!  If you surveyed him, you'd find, by his lights, it's the best of this year's crossover slate.  He was being nice.
I can squint, and I can—barely, barely—make out how and why: comedy, as they say, is subjective, and Return to Horror High is, in terms of intent anyway, a comedy, designed to exploit the slasher genre's structural loosy-goosiness as an opportunity to poke at the underlying mechanisms with a smug meta smirk; and surely one man's "slasher film pushed past failure mode as a form of mockery, without remembering to actually ever put in any scares or jokes" could be another man's "totally hilarious slasher parody."
Yet even so, the phrase "slasher film pushed past failure mode" suggests a level of ambition (or just effort) that isn't detectable even with finely-tuned instruments; perhaps the phrase "slasher film allowed to fall apart into a disorganized mess in ways that presumably a majority of its four screenwriters found amusing in their boundless contempt for the genre" would be a more appropriate description.  Imagine Scream, but if nobody tried very hard—but that's just I Know What You Did Last Summer or Halloween H20, so obviously I'm not relating this very well.  Imagine Scream but not only did nobody try, nobody was a horror filmmaker, or (if we're being blunt) any kind of filmmaker, and so nobody really had the skills to try.  Meanwhile, I can recognize that the comedic styles at play here are attempting to hold some kind of conversation with ZAZ and Joe Dante, but unfortunately in some alien, indecipherable dialect.  What it resembles most of all, I think, is one of those miscalibrated movies-within-the-movie you often see little snippets of—they often pop up in horror films in particular, parodying horror films—that literally no actual imagination has been expended upon, because no artist can stand to waste their good ideas on something as low as metatext, hence they usually just become wholly ineffective goofs.  Imagine, then, Garden Tool Massacre, now but it's the whole movie*, that you have to watch yourself, and not just watch the characters watch for a couple of minutes before the Blob eats them.  And you have to watch it for 95 God damned minutes, because that's how long it takes to indifferently dribble out slasher parody.  That's still not imagining hard enough; imagine The Making of Garden Tool Massacre.
That's the meta part, and why it's a Return to Horror High: five years ago (so, in 1982), a murderer tore through Crippen High School's student body (and a few teachers, to boot), sometimes claiming their victims extracirricularly, sometimes carving them into pieces in their own classrooms after-hours.  Whoever the murderer was, they were never caught; they vanished into legend.  But now it's 1987, and this tragedy is ripe for exploitation.  Enter "Cosmic Pictures," headed by sleazy-with-a-capital-Z producer Harry Sleerik (Alex Rocco), and his director-for-hire, an apparently serious documentarian branching out into narrative filmmaking, Josh Forbes (Scott Jacoby).  Both to stretch their tiny budget and for the ghoulish shock value of it, they elect to shoot their movie at Crippen High itself.  Unbenknowst to them, that killer didn't quite vanish... 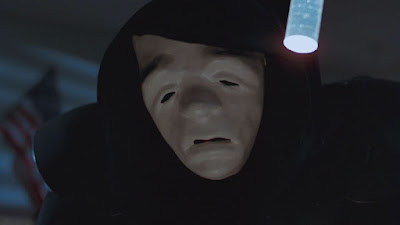 Did I remember to mention it's "like Scream, if nobody tried very hard?"
But I have gotten so far ahead of my fucking skis it's ridiculous, not least because I've made the movie sound easier to follow than it is: we begin, in fact, with the aftermath of the Second Crippen High School Massacre.  (Well, we begin with the film's strongest gesture: white credits on a black background.  I'm not even really being hyberbolic, they use an overlapping diagonal fade-in/fade-out pattern that works on the nerves a little already, and Stacy Widelitz's score is probably at its best here, too, which means that while anybody's pick for the most talented person to work on this film is pretty much set in stone—we'll get there—our options for the person most apparently talented on the basis of this film is either Widelitz or some poor unnamed production stooge at the post-Corman New World Pictures who clearly did not know what the movie was about.  Or it's the contractor who did the poster.  It's a sweet poster.)  Well, anyway: arriving upon the scene alongside Chief Deyner (Pepper Martin), we find ourselves amidst a sprawling field of sheet-covered bodies, pieced-together out on the school lawn under the moonlight, often pieced-together rather inaccurately by the ranking cop on the scene, Officer Tyler (Maureen McCormick).  There is but one survivor, screenwriter Arthur Lyman (Richard Brestoff), tasked with recounting the grisly events of the last two days.  I'm still making it sound easy to follow, but in between Chief Deyner calling for all available cops we cut to... a cop, walking a darkened hall in the school.  This is actually a flashback, relating Arthur's story, and very possibly the single worst or at least the most confusing chronological transition I've ever seen, and making matters worse I have every suspicion here that director and co-writer Bill Froelich believed he was doin' a real art.
Things kick off in earnest when the production's leading man, Oliver, walks out of his contract in favor of a sweet TV gig, and as Oliver is played by none other than George Clooney, I'm sure I won't be the first or unfortunately (because nobody should watch this even out of morbid curiosity) the last to pithily note that the film's single best meta gag is wholly unintentional, insofar as the film-within-the-film's star walks out to pursue success in the same way that Clooney himself exited after half a day's shooting to also go do more productive things.  Yes, Oliver dies.  This does not therefore make the analogy inapt. 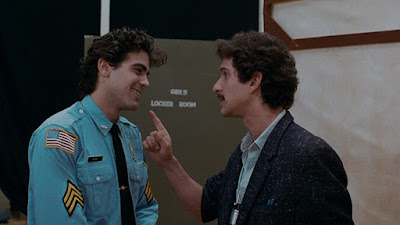 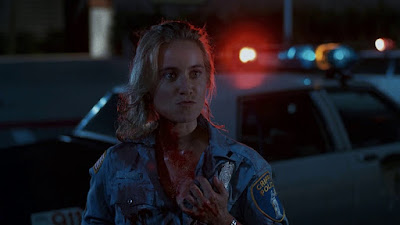 The only time I laughed at it, though, was in the killer reveal, which is extremely dishonorable, but absolutely nuts in ways that only a really awful 80s movie could have provided, and I suppose that's worth something; let's just say it indicates the film-within-the-film was really bleeding money on all those technical advisors.
Return to Horror High, I assume, fancies itself to be commentary.  But it's certainly never deep, and it almost couldn't be.  The writers and producers came from television; there is scarcely a theatrical credit amongst them (for Dana Escalanate, it is literally their only screen credit, period).  They certainly never did horror, so over the course of their little lark, they peddle assumptions like "shitty Cormanesque producers hire serious documentarians to direct their splatter films" or "New World Pictures pays to have the screenwriter on-set for rewrites" or "slasher films are shot in script order," all of which I find a little dubious; but they don't even project an awareness that movies have, like, "shooting schedules," or, in the introductory scene, in order to sell the fake-out with our cop hero, that cameras do not record events through walls.  That's what it all comes down to: we have a send-up of making movies, by people who never made a movie, and barely made one now.
Killer: The principal, undercover in a Mission: Impossible mask as the janitor, so Amos, played by a guy being played by a guy named Andy... now that's meta!
Final Girl: Steve
Best Kill: the dissection being too lo-fi, I shall instead go with Oliver, in that it happens first and spares Clooney the indignity of being further involved with this film
Sign of the Times: A tragedy happened at a high school and they didn't bulldoze the place because nobody in 1987 thought the only way to properly solemnize mass-murder is to allow terrorists to coerce us into setting fire to tens of million dollars for the benefit of future cohorts of children who weren't even there in the first place; if that's too political, I direct you to Callie's fuchsia chili pepper earrings
Scariest Moment: The dissection is still the scariest bit in that it's one of like three aggregate minutes of good filmmaking
Weirdest Moment: the penultimate twist where it turns out everybody was only pretending to be dead (the movie has like fifteen friggin' twists, requiring it to end about as many times as Return of the King; the next-to-last is the dumbest)
Champion Dialogue: "They changed everything I wrote for that location.  My stuff... was butchered!"
Body Count: this film's "unique construction" gives me an opportunity to nope out on this section, and nope I shall
TL;DR: Return to Horror High may well have invented the meta slasher, but it's borderline unwatchable in its "horror"-"comedy" tediousness, and to the extent it retains your interest at all it's just in seeing how senseless it can get.
Score: 1/10
*Btw, I am fully aware some jag did indeed go out and make a real Garden Tool Massacre.
Cardboard Science on Popcorn Culture
2014: Invaders from Mars (1953) The Day the Earth Stood Still (1951) Them! (1954)
2015: The Giant Claw (1957) It Came from Beneath the Sea (1955) The Brain from Planet Arous (1957)
2016: Invasion of the Body Snatchers (1956) Godzilla (1954) The Beginning of the End (1957)
2017: It Conquered the World (1958) I Married a Monster from Outer Space (1958) Forbidden Planet (1956)
2018: The Fly (1958) Attack of the 50 Ft. Woman (1958) Fiend without a Face (1958)
2019: Mysterious Island (1961) Robinson Crusoe on Mars (1964) Plan 9 from Outer Space (1959)
2020: The Colossus of New York (1958) It Came from Outer Space (1953) Rodan (1956)
2021: Robot Monster (1953) Queen of Outer Space (1958) The Cyclops (1957)
2022: Tarantula (1957) The Amaizing Colossal Man (1957) Journey To the Center of the Earth (1959)
Census Bloodbath on Kinemalogue
2014: My Bloody Valentine (1981) Pieces (1982) The Burning (1981)
2015: Terror Train (1980) The House on Sorority Row (1983) Killer Party (1986)
2016: The Initiation (1984) Chopping Mall (1986) I, Madman  (1989)
2017: Slumber Party Massacre (1982) Hello Mary Lou: Prom Night II (1987) Happy Birthday to Me (1981)
2018: The Prowler (1981) Slumber Party Massacre II (1987) Death Spa (1989)
2019: Phantom of the Mall: Eric's Revenge (1989) Psycho III (1986) StageFright: Aquarius (1987)
2020: Night School (1981) The Fan (1981) Madhouse (1981)
2021: Halloween 4: The Return of Michael Myers (1988) Friday the 13th Part VIII: Jason Takes Manhattan (1989) The Texas Chainsaw Massacre Part 2 (1986)
2022: Hell Night (1981) Return to Horror High (1987) Cutting Class (1989)
Posted by Hunter Allen at 9:22 PM